By Jon Waldron, Chairman of the ASA Legal Committee

The Benefits to the Scope of Coverage in an Expanded Responder Immunity Regime are many.

The response industry has been extremely supportive of a coalition effort to work with Congress to enact enhancements to the current responder immunity provisions enacted by the Oil Pollution Act of 1990 (“OPA 90”). Unfortunately, however, Congress has not taken immediate action following the Deepwater Horizon incident, which occurred almost 3.5 years ago, like it did following the Exxon Valdez incident in 1989 to enact legislation to remedy deficiencies identified as a result of the incident.
Congress acted in approximately 18 months following the Exxon Valdez incident. One of the most important things this proposed legislation would do is to clarify that the scope in coverage and confirm that all persons and entities responding to an incident would benefit from this enhanced protection.   An update on this initiative is therefore in order, as is a discussion of the revised language of the proposal, and an explanation of just how this expanded coverage would work.

Maritime Spill Legislation in 2012
In short, the major maritime-related bill enacted by Congress on December 20th of last year, the Coast Guard and Maritime Transportation Act of 2012, included only a few spill-related provisions, and the responder immunity provision was left out. Indeed, Congress failed to even introduce a consolidated bill focused on spill provisions in 2012. It is now clear that given the time that has passed since the Deepwater Horizon incident it is extremely unlikely that (until or when there is a new pollution incident) Congress has the will-power to introduce, much less move, a spill-focused bill for fear of losing control of the types of provisions that might be included is such a bill.  Accordingly, entities interested in advancing spill related legislation must identify other types of legislation that Congress is interested in moving for insertion of any type of pollution related measures such as responder immunity.

Responder Immunity Coalition Actions in 2013
The Responder Immunity Coalition (the “Coalition”), represented by all response interests including the salvage industry, oil spill response industry, spill management industry, the offshore vessel support industry, and the well containment industry, have been working with key leaders in the House to first introduce a stand-along responder immunity bill. It is hoped that a responder immunity provision will be introduced in the fall of 2013 and then will be included in the Coast Guard Authorization bill that is likely to be introduced later this year. In addition, the Coalition will stay alert for other types of bills that Congress may decide to move.

Intent and Explanation of the Current Proposal
The proposed legislation has been further refined as a result of comments received from various factions of industry. In its revised form, the key elements in this proposal address the two main lessons learned from the Deepwater Horizon spill which were: (1) plaintiffs sued responders under general maritime law due to personnel injury caused by the exposure to the spilled oil and the dispersants which were approved for use on a daily basis by the Federal on-Scene Coordinator  pursuant to the National Contingency Plan (“NCP”); and (2) bare allegations of gross negligence in the response actions without having to provide any underlying facts to support such allegations. The following are the most pertinent points of the proposal.

It is important to note that the proposed legislation preserves the “polluter pays” principal. In other words, the Responsible Party already bears this liability. Post Deepwater Horizon litigation demonstrates that the Responsible Party is already responsible for the types of exposure claims that the proposed legislation is intended to address.
A responder remains liable for all damages and removal costs resulting from the gross negligence or willful misconduct of their actions. Responders are not seeking absolute immunity for any and all actions taken by the Responders in a spill response. As under current law, the Coalition proposal would not exempt Responders from liability in situations involving gross negligence or willful misconduct. The purpose of this protection today remains the same as when OPA 90 was enacted – to ensure that the Responders necessary to address future spills will, without hesitation, continue to respond immediately and decisively in difficult circumstances to mitigate spill effects to the greatest extent possible.
In addition, the proposal has been revised to make it clear that the immunity discussed above related to personal injury and wrongful death claims, is specifically limited to exposure claims related to the spilled oil and dispersants approved under the NCP. Responders remain liable for Jones Act seaman’s claims for personal injury or wrongful death under existing law resulting from the operations conducted by the responder not related to such exposure claims.
One of the key goals of the proposed legislation is to make it clear which persons are protected under this limited immunity. The public policy goal should be to make sure that any person or type of organization who is needed to respond immediately to mitigate the potential adverse effects of a spill are encouraged to respond without the fear of liability. In the initial stages of a response this would be parties such as salvors if a vessel had run aground or sunk, or in case of the Deepwater Horizon, the offshore supply vessels which immediately took action to extinguish the fire and, as a result of the quick heroic actions taken that day, saved the lives of those rig personnel who jumped in the water. This could also include the new well control organizations and their personnel in another well blow out case to foster expeditious actions to cap a well and disperse the oil as it flows from a well head until it can be capped. These personnel would be considered Emergency Responders.
It should also include those response organizations and personnel who respond to clean up the spilled oil. The would include the oil spill removal organizations, spill management teams, volunteers including vessels of opportunity and the crew of such vessels, as occurred in the Deepwater Horizon. The actions covered should include dispersant operators and in-situ burn actions. As another example, often a multitude of volunteers are used to clean-up oily shorelines and beaches following a large spill. The persons ashore in supervisory or oversight positions making key decisions in difficult circumstances should also be covered such as shoreline cleanup supervisors and personnel working in command centers. These personnel would be considered Clean-Up Responders.
It is important to note that immunity is only available to any of these personnel when their actions are consistent with the NCP or otherwise directed by the FOSC. Those activities which are too far removed from direct response activities would not be covered by responder immunity such as a truck driver delivering supplies or equipment to support response operations because such activities would not have a close enough nexus to the response efforts.

Work Remains to Be Done
Much has been done to position this legislation for enactment. Much more needs to be done this year to ensure that any potential objections to the legislation will be addressed. There is often an initial negative reaction from certain segments of industry when someone mentions immunity which could result in increased liability for someone else. However, that is not the case here because the Responsible Party is already strictly liable for all removal costs and damages. And, it is in the interest of all potential Responsible Parties, should they face a future unfortunate incident, that all response resources needed in an incident can and will respond as quickly as possible without the fear of liability. This will minimize to the greatest extent possible the liability of that Responsible Party’s potential liability by minimizing the amount of oil spilled and cleaning it up as quickly as possible. 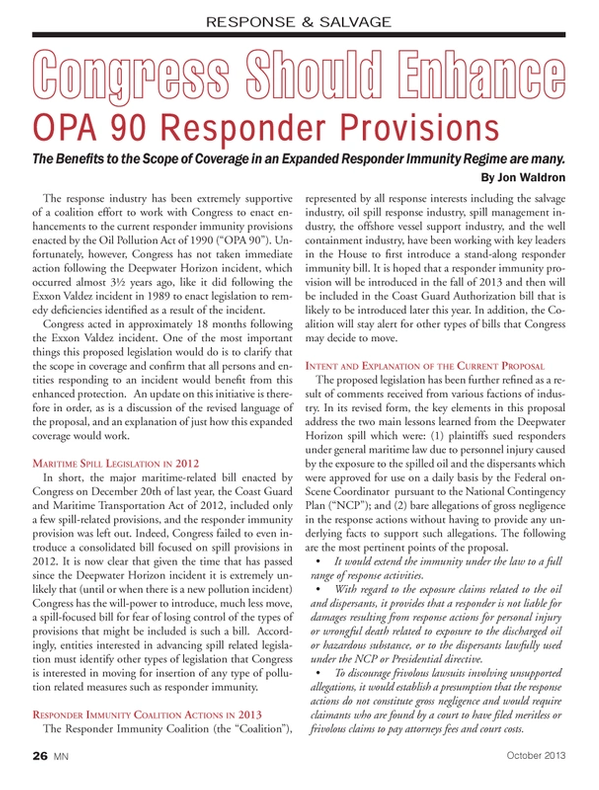