Houston-based Kirby Corporation runs an in-house training center that today instructs 3,000 students yearly in 26 different courses – many of which are U.S. Coast Guard approved. Located in Channelview, the 23-year old, state-of-the-art center is conveniently located in the northeastern curve of the Houston Ship Channel. Last month, MarineNews spoke with Jim Guidry, Kirby’s Senior Vice President of Vessel Operations and a 20-year company veteran, about the center.
In 1984, Kirby owned just 20 boats and 50 barges, with a turnover of about $35m. Today, after nearly 30 years and about 50 acquisitions, it has a market cap well in excess of $4B, and its fleet hovers around 350 boats and 950 barges, commanding approximately 35% of the U.S. market. That kind of success and growth can be attributed to many things, but a big part of the equation has to be Kirby’s investment in its employees.
Training is therefore at the heart of Kirby’s investment in its people. Back at Kirby’s Training Center, Guidry explains further, “Our in-house training is targeted to all of our employees, from deckhand to master.”  He adds, “They have jobs with us when they come to the center. For new deckhands, their first twelve days on the job are spent at the center training before they even see a boat.” With 4,500 employees, Kirby is the nation’s largest domestic tank-barge operator, transporting bulk liquid products on the Mississippi River, the Gulf Intracoastal Waterway, on three U.S. coasts, as well as in Alaska and Hawaii.
Many of Kirby’s courses are associated with the issuance or renewal of Coast Guard documents, and training continues year round. “We offer courses 300 times a year and have people in training every day, depending on the class,” Guidry said. “We train as we work; seven days a week, 365 days a year. At least one or two classes are going on each week.”

Center Caters To Mariners at All Levels
Spanning the full range of Kirby’s marine personnel, deckhands all the way to masters take Coast Guard-approved courses – and others that improve every aspect of the well-rounded employee. “Mariners can achieve a tankerman’s endorsement for dangerous liquids and liquid gases; earn an apprentice mate’s license, a master of towing vessels license, a qualified member of the engineering department license and a defensive driving certificate.” Guidry told MarineNews. “They can take classes in behavior-based safety and leadership. They can qualify in radar observer inland, radar observer renewal, firefighting, CPR and first aid.”
The Coast Guard audits Kirby’s classes to make sure they’re within certification. “And USCG also takes our courses to become or stay familiar with industry,” Guidry said. For Kirby, it’s also about relationships; whether that entails the regulatory folks that oversee their operations or the clients that they serve. All of it pays dividends. “We’ve even done training in ‘barging 101’ for many of our customers, so that their employees can see how tank barges operate,” he said.
All of the center’s instructors are Kirby employees and former mariners who are trained to teach. “Our trainers are licensed equal to or above the level they’re teaching.” Guidry said. “The folks who teach navigation have Master’s licenses and the tankermen trainers have tankerman’s tickets. Our instructors have anywhere from ten to 25 years of industry experience.”

Simulators Boost Instruction
The company’s Channelview center contains a state-of-the-art-Transas Simulator, used primarily for USCG-approved classes. “We utilize simulators to train in boat handling, wheelhouse management, bridge-resource management and towing,” Guidry said. “Our first simulator was installed in early 2005 and we’ve had our latest version since 2008.” Transas Group, headquartered in Russia, produces a myriad of simulators for the marine market. When they need the extra capacity, Kirby also relies on simulators located at the Seamen’s Church Institute in Houston. “We’re their biggest customer in Houston,” says Guidry. In fact, SCI’s simulator is the only significant outside training resource that Kirby uses. When they do, it is Kirby’s instructors that teach.

Expanded Curriculum & Services: Delivering Loyalty from Within
Consistent with the company’s overall explosive growth in size and numbers, Kirby’s training program has also swelled within the last two decades. “As we grow and acquire more staff, training has expanded and we’ve offered more classes,” Guidry said. “Since 2000, we’ve added a dozen classes to the list we teach.” Class sizes are kept in check with maximum trainer-to-student ratios established by the center.
According to Guidry, the training center is one of the building blocks of the Kirby’s culture. “Students are exposed to skill-based training.  They also meet senior executives weekly, and they eat lunch with our office personnel on a daily basis.” As the center’s full-service dining facility serves three square meals a day, it also delivers so much more; improving the bond between a wide cross section of different skillsets, job titles and human demographics. Beyond this, the center also contains a dorm for students taking courses and crews who come in the night before sometimes spend the night so that they can catch their next boat, refreshed on the next day.
Guidry insists that Kirby wants its staff to have opportunities to grow within the company. “While we do hire a few skilled folks every year, we train 95 percent or more of our skilled employees. Promoting from within and employee development is a huge priority for us.”
This fall, Kirby began teaching two USCG-approved engineering courses; Qualified Member of the Engineering Department (QMED), and the other is Designated Duty Engineer.”

Return on Investment: Measurable Gains
Kirby’s investment in employees has paid off through its strong safety record, employee-retention rate and customer satisfaction with services, Guidry said. Shares in Kirby, traded on the New York Stock Exchange, reached an all-time high in September. Success, from purely a human resources standpoint, has been a simple formula for Kirby: Bring the people in early, taking them through the in-house training process, show them how they have a career at Kirby, paying them fairly and being consistent.
For Jim Guidry, the heart of the Kirby Corporation is and will always be its employees. Retaining those employees, therefore, has paid off handsomely. It’s a simple enough concept. So, too, is Kirby’s success.

Joe Pyne on management style: “One of the things I’ve talked to our management team about is, if you can’t explain it so the average person can understand, that probably suggests that you don’t understand it.”
Kirby’s CEO on training: “That’s the secret to retaining them. You want them from the start and to be a part of your team forever. With our on-shore staff, we don’t have a lot of turnover. For the most part they stay with us, and it’s important to compensate them fairly. People need to feel like you are being fair with them.”
On the heart of the Kirby Corporation - its employees: “They see the customers more, they spend the money, and they’re the ones that deliver the service. A lot of our success is recognizing that we are not just a marine transportation company. We are a service company that uses marine assets to do what our customers pay us to do: move their product safely and reliably.”
On the key to employee recruitment & retention: “I think if you can bring someone in from high school, for example, and bring them through your training system, it helps to reinforce the company culture. You put them in the fleet for six months, bring them back in for more training to not only reinforce the culture but give to them an additional skill set, I think you not only have a much better chance of keeping the individual, but you have someone who really understands what you are about.” 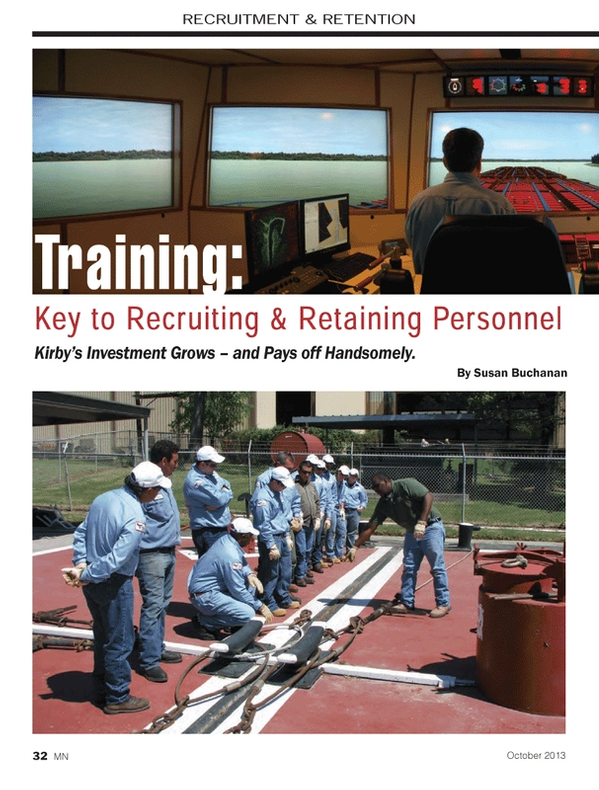