Card reader technology is tested, proven and in use, nationwide. While the maritime industry awaits the Fed’s edict on MTSA, the solution already exists.

The Maritime Transportation Security Act (MTSA) requires that individuals needing unescorted access to MTSA-regulated Facilities and Vessels must first obtain a TWIC. To obtain a TWIC Card, an individual must meet certain eligibility requirements and pass a security threat assessment conducted by the Transportation Security Administration (TSA). Individuals are then issued a tamper-resistant credential containing the cardholders biometric fingerprint data, which provides a conclusive link between the card and the individual cardholder. To date, more than 2 million of these credentials have been issued.
If Port Authorities and Terminal Operators have been slow to adopt the technology necessary to read biometric data contained in the Transportation Worker Identification Credential (TWIC), then there is plenty of blame to go around in this rapidly developing story. The often criticized program is frequently cited as a failure by industry and members of Congress. Meanwhile, a recent GAO report paints an unflattering picture of the technology and its potential to succeed in its original security mission as envisioned by those who dreamed it up. Separately, mariners and port workers have long chafed at the cost and hassle going to get the card, which up until now, has largely been used as a ‘flash’ credential for those facilities that bother to insist upon it at all. For their part, terminals and ports bemoaned the fact that no suitable TWIC reader technology as yet existed.
The final piece of that equation involves a TWIC card “reader” at the marine terminal, something that has proven to be an enormous headache. It has also led to the call from all sectors to end the so-far ineffective and expensive program. That said; the perception that a solution does not exist could not be further from the truth. Reliable, tested and proven card readers are up and running from coast to coast. Even as Congress, the Coast Guard and TSA contemplate whether or not to move forward with the TWIC program, at least three solutions are already in play, doing just that.

Intellicheck Mobilisa: Tested and Proven
Dr. Nelson Ludlow, CEO of Intellicheck Mobilisa, told MarineNews that, as early as four years ago, many companies were interested in producing and selling TWIC readers, but ports weren’t buying because the federal government hadn’t mandated it yet. That’s still the case today, but Intellicheck Mobilisa – a provider of identity solutions and wireless security systems – recently announced that its TWIC Reader Plus Models IM2610 and IM2620 have become the first mobile readers of TWIC cards to be approved by the Transportation Security Administration (TSA). The TWIC readers have completed each of the 140 QTL test scenarios and are now included in the TSA’s published list. But, Intellicheck isn’t the only company with compliant devices on the market today. At least two other firms have produced working models and that list is sure to grow.
Ludlow explained, “We call our product ‘TWIC Plus’ as it not only reads TWIC cards but also scans driver’s licenses and military IDs, matches person-of-interest lookups with law enforcement lists and authorized lists, and is capable of integrating with existing port security systems. Both the lighter and smaller Model IM2610 and the more ruggedized Model IM2620 incorporate these features, which were not contained in our previous TWIC readers.”
Ludlow also told MarineNews in September, “Given our experience in ID card system solutions, the TWIC reader solution was not a stretch for us.” Addressing those who continue to resist the implementation of the TWIC program, he added, “As many as 1.5 military personnel and several million more civilians already comply with similar programs as they go to work. Vendors going to work on military bases also must comply.”
Ludlow’s version of the TWIC reader can be had for as little as $5,200, in a standalone version, and the Intellicheck Mobilisa entry can integrate with myriad control systems. Intellicheck’s TWIC readers are already being sold into the market and are in use today at major ports on both coasts.

Schneider Electric Joins the Party
In August, the successful testing of Schneider Electric’s PC3-TBR reader against the specifications set forth by the TWIC Reader Evaluation Program was announced. According to Schneider Electric’s executive VP Smart Infrastructure Division Ignacio Gonzalez, “As one of the first vendors to undergo testing for a TWIC reader, Schneider Electric is a pioneer of the new program … The successful completion of the test demonstrates Schneider Electric’s industry leadership in the terminal automation sector.”
Schneider Electric is a specialist in energy management with operations in more than 100 countries, offering integrated solutions across multiple market segments, including Utilities & Infrastructure and Data Centers & Networks. Focused, among other things, on making energy safe and reliable, the group’s entry into the TWIC reader business was a natural extension of what they already do. As one of just two TSA certified providers (as MarineNews went to press), Schneider gives terminal operators even more choices when it comes to ramping up for what could be the final rule.
Although security card reader devices are not Schneider’s primary focus, the firm started evaluating a biometric solution over 3 years ago. In 2012, Schneider became ICE list certified with its device and then started actively pursuing the biometric certification. Schneider Electric’s integrated solutions reach across multiple market segments, including solutions offered to bulk fuel terminals. According to Schneider, the DTN Guardian 3 is one of the most comprehensive terminal automation systems (TAS) on the market. Because some customers operated terminals under USGC jurisdiction, the firm developed their TWIC biometric readers primarily satisfy that need. Currently the DTN PC3 – Schneider’s TWIC reader entry – is offered in conjunction with its DTN Guardian 3 terminal automation system.
A Schneider Electric spokesperson told MarineNews in September, “While there is no plan for us to offer a 100 percent stand-alone fixed reader solution, we are open to the concept.” For those potential buyers looking to buy now, Schneider Electric also reported that within three to four months, they could ramp up production to meet any anticipated demand.

SSA, too
Separately, apart from the two previously mentioned manufacturers, but also arriving first at the Promised Land via a slightly different route, West Coast Marine Terminal operators SSA Marine grew weary of waiting for the solution to come to them. When SSA Marine and LVS Consulting, in partnership with TRL Security Systems and Cogent (a Division of 3M) announced the deployment of the first of its kind TWIC System – the ‘BeastBox’ – in Long Beach, CA, the puzzle of producing TWIC readers that actually work was finally solved – and way ahead of anyone else.
Housed in stainless steel, the BeastBox is robust and designed for the hardened maritime environment.  Using a “2 is 1 and 1 is none” philosophy, there are no less than 2 BeastBoxes built in to each access control location. At turnstiles, this reduces the bottlenecking during “surge periods” and “shift changes.” Throughput speed is a key metric and the additional BeastBoxes offset heavy foot traffic and provide a backup system in the event of failure. With high readers for truckers and low readers for everyone else, terminals can optimize gate moves in a single trucking lane. As truckers and pedestrians insert their TWIC into the card reader, the system records each transaction, while authenticating the individual cardholder against the TSA cancelled card list granting access to the terminal.
Between May 2012 and May 2013 SSA recorded over one (1) million TWIC card transactions at its Terminals in Long Beach. Employing 33 Electronic Readers at their terminals, the access turnstiles fire in less than 2 seconds and in Biometric Mode in under 4 seconds. These 1 million TWIC Card Transactions convincingly show how the SSA System box successfully forced Industry to renew or purchase new TWIC Cards, and comply with the mandates of the Federal Government (well prior to the government’s ability to enforce such a program).

The TSA, TWIC and You …
At a recent congressional subcommittee hearing, the U.S. Coast Guard assured Rep. Janice Hahn (D – CA) that they were exploring “alternatives” to the Transportation Worker Identification Card (TWIC) program. Actually, the program is finally poised to succeed. With readily available card reader technologies that work – notably from Schneider Electric, Intellicheck Mobilisa and SSA Terminals – it turns out that there is no real reason to re-invent the wheel for a technology that already exists.
The California congresswoman nevertheless pressed U.S. Coast Guard ADM Servidio on the potential crisis brewing due to the fact that hundreds of thousands of these cards were due to expire at the exact same time. Apparently unaware of the ongoing use of TWIC card readers at marine terminals in her own state, she also didn’t know that SSA has already successfully required thousands of truckers on the West Coast to do just that. It seems that if you don’t have a valid TWIC card, you don’t get in. Imagine that.

In Practice: problem solved
Today, more than 2.1 million TWIC cards have been issued to port workers, truck drivers and merchant mariners. Despite the outcry from users who had to foot the $132 bill to obtain such a credential, Intellicheck CEO Ludlow insists that TWIC cards are actually far less expensive than some federal ID cards which are already required to get into certain facilities. As many as 1.5 million military personnel and another several million civilians already comply – whether that entails smart chip data or a biometric card. Hence, he says, the “novelty” of TWIC is in actuality, nothing new at all.
An approved TWIC reader must unlock “containers of data” within milliseconds in order to comply with TSA requirements. Additionally, TSA’s NPRM says that about 550 locations should be required to have the readers – ferries and cruise ship terminals, in particular, while another 1,500 will be strongly recommended at dozens of ports.
For about $5,000, terminal operators can employ a proven system of TWIC ID card verification – and, they can have it today. If ‘necessity is the mother of all invention,’ then it shouldn’t surprise anyone that a marine terminal operator would ultimately be the driver for the first ever workable TWIC solution, paving the way for others to do the exact same thing. In doing so, SSA may have saved the federal government from having to shutter a program that has already cost the taxpayers plenty. And, while there’s no decision on whether SSA also intends to certify their proprietary, in-house version and sell actively into the market, at least two other vendors do.
Like it or not; the complete TWIC solution is here. The only question left to ask is why anyone, presented with a database of 2.1 million thoroughly vetted workers, wouldn’t take advantage of that layer of security to make their terminals, vessels, foreign trade zones – indeed, the entire supply chain itself – that much safer. 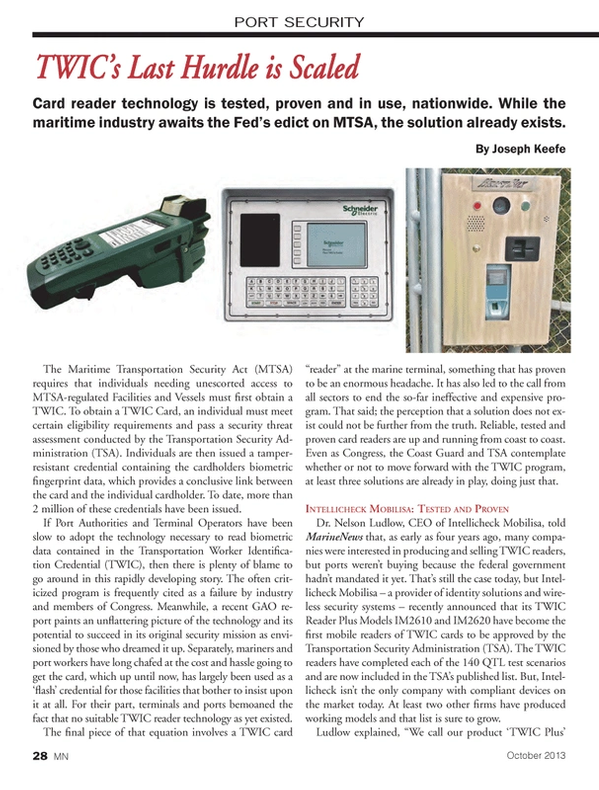