Effective Communication on the Water

Because communication on the water is serious business, David Clark Marine offers a number of system solutions tailored to meet specific needs. On board the City of Marco Island’s Firestorm 32 High Speed Aluminum Fireboat, made by MetalCraft Marine, first responders depend on their wireless communication gear every day.

The Problem
Surrounded by wind and engine noise, salt spray, choppy seas and all of the unexpected variable that come with operating in a harsh, unforgiving marine environment, communication is key to effective performance. Nowhere is that reality more evident than for firefighters and first responders everywhere, as they patrol and perform a myriad of public safety missions. Deputy Chief Chris Byrne of the City of Marco Island Fire Rescue Department can personally attest to that.
Marco Island’s list of requirements for a dependable communications system was long and demanding. These included Durability in the marine salt environment, mobile grade, stainless steel hardware, dynamic earphones with stainless steel retainers, and immersion proof, dynamic microphones. Battery life [Li-polymer batteries last up to 24 hours of continuous use between charges] was also important, comfort [the DC headsets feature comfort-gel, undercut ear seals and adjustable head band assemblies], ease of use and strong support from customer service.

The Solution
Bob Daigle, David Clark Company Product Manager for Wireless Systems told MarineNews, “The Marine Series 9900 Wireless Communication System gives crew members added mobility to move about freely and communicate clearly, without being tethered to the vessel, which, as in the case of Marco Island Fire Rescue, is a critical benefit for fire/rescue crews as well as a variety of other workboat applications.” In the end, it was David Clark that met the Marco Island challenge. And, Byrne says, “That’s why we chose and depend on our Series 9900 Marine Communication System from David Clark.”
David Clark Marine Intercom Systems improve on board safety by providing solutions on board boats and vessels where problems such as high-noise, constant shock and vibration from choppy waves and the corrosive environment of the sea create obstacles to reliable and effective communication. In general, this takes the form of three different applications:

Evaluation, Installation – and Training, too …
According to Deputy Chief Chris Byrne, Marco Island uses the 9900 Marine Series Wireless Headset Communications System. He adds, “The system provides us the ability to monitor and transmit on two different radios, 800 MHz Fire Rescue Dispatch and VHF Marine band. The intercom allows for crew communications as well as communication between the Vessel Operator and the Paramedics providing patient care.” Communications are conducted with the Marine Incident Command Center and with the U.S. Coast Guard, as well as other rescue and law enforcement vessels. Paramedics also have the ability to contact the ER for physician orders and the Medical Helicopter if the patient requires Medivac.
The City of Marco Island Fire Rescue Department was first exposed to the David Clark solution when David Clark’s Bob Carroll made a visit with a demo set and tested the system on their Fireboat. Byrnes told MarineNews in September, “After that evaluation we were convinced and made our decision to purchase DC.”
The System was first installed in July 2014 by the department’s fire apparatus mechanic, and the install posed some challenges due to radio cable compatibility. That said; the support from Bob Carroll and David Clark factory Engineers was – in Byrne’s words “outstanding” – and they quickly ironed out all the kinks. Once installed, David Clark provided initial support to ensure that all crew members were well-versed in the equipment’s operation.
While some customers might be satisfied with the wired options, Byrne says, “Wireless was our only option. The wireless product allows our personnel to freely move around our vessel while maintaining communications. It provides us the ability to have a crew member / paramedic board another vessel to evaluate a patient and relay information and needs to the Fireboat.” In the end, this improves situational awareness and incident preparedness.

Real Life; Real Applications
The Marco Island team recently responded to a near drowning on a remote Island south of the City. According to Byrne, the incident occurred during inclement weather creating strong wave action. The patient was located on the beach, however due to the condition of the waves breaking on the beach, the vessel had to maintain a safe distance offshore. Deploying one firefighter paramedic into the water with a headset to the beach, communications were quickly established, a medical assessment of the patient was performed and the pickup procedure of patient and firefighter was agreed upon and handled, with the help of the David Clark system.
Still another recent incident involved a swimmer who had been taken out into the Gulf of Mexico off the beachfront and was unable to swim back to shore due to strong tidal flow and rip currents. Byrne explains, “Our Fireboat responded and upon arrival had to maneuver the rear rescue platform of the fireboat towards the victim to retrieve her from the water. With a crew member on the platform communicating with the fireboat operator, the victim was safely retrieved from the water.” In this case, improved crew-to-crew communications was the key. The victim was then transported to shore during which the paramedics assessed her for injuries and communicated her condition to an awaiting Rescue unit.
At the end of the day, the number one feature/benefit that Marco Island personnel like about the system is that it has provided them with markedly improved communications and at the same time, improved incident coordination due to the ability to clearly understand direction from the Incident Commander. Deputy Chief Chris Byrne sums it up neatly, insisting, “Safety is paramount in these operations and the David Clark wireless system provides us with reliable consistent crew communications through the intercom feature.” All of that adds up to a more confident, effective and safer crew. And, that – in a nutshell – is David Clark’s mission. 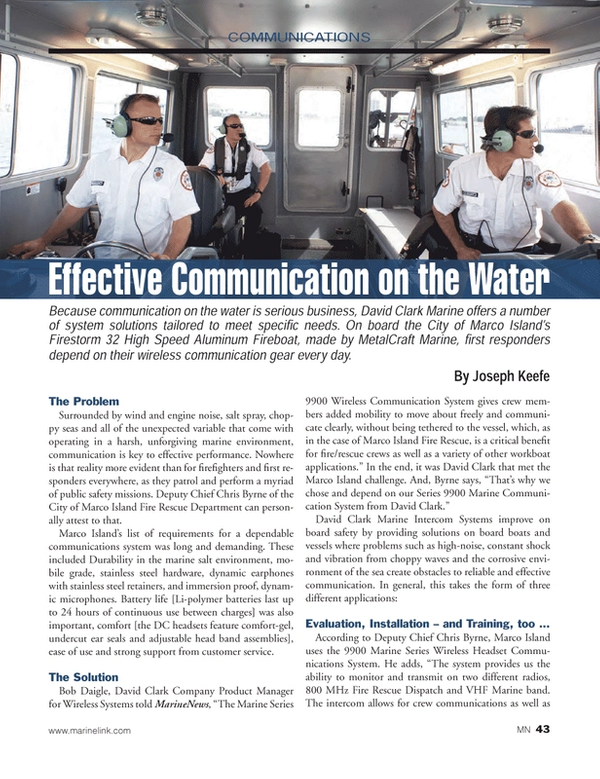 Read Effective Communication on the Water in Pdf, Flash or Html5 edition of October 2014 Marine News