In a dangerous world, even the largest ship in the world depends on the smallest maritime security and special mission platform. And when it comes to small boat security operations, innovation is the name of the game.

With 90% of world trade transported by sea then passing through ports and waterways, no amount of technology will replace the requirement for multiple small fast craft and skilled operators. Finding new ways to share knowledge and best practice has never been more important in the maritime world. Innovation has always been a crucial theme at defense sector events that explore the latest technology in small craft design, acquisition and operations. Beyond military applications, homeland security and law enforcement, there are many ongoing initiatives around the world that require fast response craft.
Mobility plus the ability to operate in shallow areas are critical capabilities for small craft. Commercial fast boat builders typically focus on building higher speed and larger capacity boats in the 30 to 50 feet (9 to 15m) range. Deep-V RHIBs and hard boats still make up the lion share of procurements, however there are growing opportunities to utilize innovative small craft under 30 feet for new scenarios that present unique challenges.
Defining a multi-role craft is a challenge for large fleet procurements. The U.S. Coast Guard is replacing the Response Boat-Small (RB-S) fleet with a new vessel. The 45+ knot Metal Shark craft, at 28 feet 6” (8.7m), with a shaped solid foam collar encased in urethane, offers the impact protection of a RHIB with the deck space of a hard sided craft. The procurement is for up to 500 RB-S II, with 20 going to US Customs & Border Protection and 10 to the Navy. The Coast Guard defines the craft as a multi-mission platform, used for the full range of Coast Guard missions, including search and rescue, vessel boarding team deployment and law enforcement missions, port security; drug and migrant interdiction and environmental response operations.

Reaching the Mission
Trailers and towing vehicles are critical components for small craft mobility, launch and recovery. In most countries there is a strict requirement to be ‘road legal’ which limits length and width, as well as the ratio of weight between the towing vehicle and the combined boat with trailer load. Even when organizations have access to helicopter transport for remote insertion and extraction of personnel, they still need to consider how to move their craft. For example, Maine-based Yale Cordage has developed a range of heavy duty rope slings to handle boats that are carried under helicopters. Government Accounts Manager, Skip Yale explained, “The design goal for our Four Leg RIB Boat Slings was to eliminate wire rope plus reduce weight, electronic interference, corrosion, wire fish hooks and to engineer an overall safer system. The stainless lift ring with hand holds is coupled with four Aracom T Maxijacketed rope legs. We know that over engineering can be crucial to mission success so each rope leg is capable of carrying 34,000 lbs (15,300 kg).”

Riverine Environments & Challenges
Riverine craft are specifically designed and manufactured for estuary, river and shallow water operations. In the extreme brown water environment, a poorly designed vessel can impact on mission effectiveness and crew safety. Generally, a speed of 30+ knots is common for riverine craft. Greater speed and armor can give tactical advantages but this often means twin engines and a heavier craft, since weight is a critical concern for any shallow water vessel. Modular ballistic protection enables the use of armor during specific missions.
By combining extensive background of operational experience with task-specific design Massachusetts based specialist boat builder ReconCraft have developed vessels for challenging applications. ReconCraft COO Joe Silkowski said, “Depending on the size of the vessel and the projected operating environment, deadrise angle between 5 and 10 degrees are the most common for riverine craft. We develop some models up to 17 degrees with a variable deadrise if there’s a need for both coastal and riverine capabilities from the same platform, for example transiting from a river mouth through the coastal area to another river.” In conventional naval architecture, chines and spray rails are incorporated for grip on the water at planing speed. Silkowski adds, “This is very much dependent on how the vessel is desired to perform in shallow water. For example, some operators prefer some amount of slide when turning the vessel and aggressive chines can hinder this. There is no one size fits all solution to riverine craft in terms of hull design and performance.”
Many lessons learned from riverine will translate well to melting ice regions as they present similar hazards to navigation as those encountered in a river system. Use of ultra hard wearing keel pads and hull coatings allows craft to slide over obstructions and areas with little water. These features enable operators to patrol in previously inaccessible areas and extend the working life of the craft. The advantages with utilising successes from other sectors include short timelines from tender to build, and COTS (Commercial off the Shelf) procurement.

Rising Up: Hovercraft & Hydrofoils
Small hovercraft have a growing role to play in search and rescue, commercial and military operations around the world. Hovercraft can be a practical proposition for operations in areas inaccessible to other vehicles including frozen water, mud flats, intertidal areas, shallow rivers and flooded inland areas. Perceived to be environmentally sound, as they don’t exhaust into the water, create no wash and do not disturb the sea bed, they are also economical and do not endanger marine animals as there is no propeller in the water. UK manufacturers Griffon Hoverwork and Flying Fish Hovercraft and have formed a manufacturers association to develop the Hovercraft Code of Practice (HCoP). The objective is to address the differences in operating procedures, construction and usage relevant to these unusual vehicles.
The Griffon 380TD is a 22’-4” diesel powered hovercraft capable of carrying up to five persons or payload up to 837 pounds. The 28 feet Griffon 995ED is a fully amphibious diesel powered and electric drive hovercraft capable of carrying up to eight persons, or payload up to 2193 lbs (995kg). Griffon Hovercraft benefits from being road trailerable using a purpose designed ‘hover-on / hover-off’ road trailer which can be towed behind most 4x4 vehicles or trucks, allowing rapid deployment in roles such as surveying, search & rescue and flood relief. The 380TD hovercraft is easy to operate due to the ability to control lift and thrust independently.
A growing number of small craft are incorporating hydrofoils to improve efficiency at speed. When the craft is moving the hydrofoils create dynamic lift for early planing and reduced wetted area. The HYSUCAT (Hydrofoil Supported Catamaran) principle uses a hydrofoil system in the tunnel between two asymmetric hulls. The system consists of a main foil located slightly forward of the craft’s center of gravity which carries part of the craft’s weight at speed. Two smaller ‘trim’ foils in the tunnel near the transom act like tail wings on an aircraft to provide longitudinal trim stabilization of the hull.
The Hysucat Extreme is a 28 foot) catamaran RHIB fitted with the hydrofoil system. Malan Conradie, designer and Director of the South African manufacturer, explains, “Less resistance and increased buoyancy enable the Hysucat to carry more weight at speed with less power. The hydrofoil technology can also provide high speed operations in excess of 70 knots. Operational benefits include reduced wake, reduced fuel consumption and increased range.” Conradie adds. “We are building boats for Kuwait and the U.S. We are currently working on a project for a full electric water taxi for Belize, showing a running time of more than 2 hours at 25 knots with a single 180 hp electric engine.”

Smaller Craft, Bigger Potential
Smaller, lighter, easily transported and occasionally man-handled to launch and recover are requirements for some professional users. The UK built C-Fury Patrol is a 13 foot hybrid RHIB designed to deliver high levels of control from low speed to over 40 knots whether empty or fully loaded. The composite FRP hull combines a catamaran for ride quality, an assister hydrofoil for efficiency and ride enhancement plus large air tunnels for stability and shock reduction. The hydrofoil provides up to 30% lift, while the air trapped and being compressed in the tunnel provides up to 5% lift. The result is that the hull planes high in the water and the reduced wetted area of the hull increases efficiency and reduces fuel consumption. The Patrol hull is a flexible platform that can be re-configured for tasks ranging from patrolling with sophisticated electronics suites to disposable unmanned target boats.
Many maritime organizations around the world now use Personal Water Craft (PWC) for patrolling and rapid response. PWC have handlebar steering and utilize waterjet propulsion for high performance with stock craft achieving over 60 knots. The driver sits or stands on PWC, they can carry one or two passengers with the option to tow a sled. The coast guard defines a personal watercraft as a jet drive boat less than 13 feet in length. Characteristics include small footprint, light weight and inversion protection. In recent years the PWC acronym has evolved to define a new breed of applications. Rescue Water Craft (RWC) are used in Hawaii and Australia by lifeguards in high surf conditions.
PWC have gained a solid reputation in the maritime community for specialist roles that other craft simply cannot undertake due to design functions. These craft can be fitted with specialist navigation, mapping and rescue equipment for roles ranging from low speed environmental survey to high speed patrol. Mark Pullinger, Managing Director of UK company Specialist Small Craft, said, ‘PWC can be used as patrol craft to cover roles ranging from managing busy waterways and large public events, to security sweeps at waterside installations.” Specialist military PWC can be used in overt or covert trim for surveillance and other specialist roles.’
Maritime Applied Physics Corporation (MAPC) is offering the Greenough Advanced Rescue Craft (GARC) as a multi-role craft. At 12 feet 8” (3.8 metre) the boat needs only 16” (40cm) of water to operate. The GARC is based on a rescue boat hull designed by George Greenough, an Australian designer best known for his innovative surfboard designs. Ongoing developments have led to a rugged, stable, jet powered vessel which can be launched in breaking surf or dropped from an airplane. The open transom and stern tongue allow rescues without lifting the casualty. Mark Rice, founder and president of MAPC, says, “This design has a proven track record in the surf and the ability to air drop the vessel provides a unique capability to deliver both manned and un-manned versions to a rescue site.”
Unmanned Aerial Vehicles (UAV) now perform numerous roles around the world. Unmanned Surface Vehicles (USV) and robotic systems for marine operations, including launch and recovery, are developing rapidly. However a major obstacle to overcome is re-interpretation of the International Regulations for Preventing Collisions at Sea regarding keeping a lookout. Small craft are likely to be the first viable unmanned platforms in regular use around other vessels. Professional sector boat builders who currently offer propulsion and electronics options will offer craft with the option of ‘manned or un-manned’. Extreme applications that may drive demand for this next generation of small USVs include the 3Ds – tasks that are Dull, Dirty and Dangerous.


(As published in the October 2014 edition of Marine News - http://magazines.marinelink.com/Magazines/MaritimeNews) 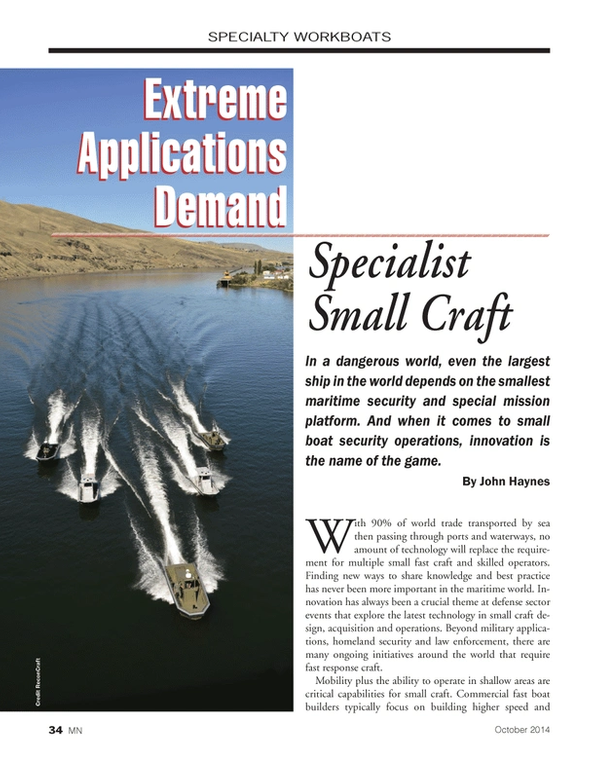