Madrid’s Sener Ingeniería y Sistemas S.A. (Sener) is hoping to regain a foothold via its FORAN CAD/CAM software in the North American market, and to use that opening to crack the Big Six military shipyards, landing at least one lucrative long-term contract. But first, it’s going to have get past its chief competition on these shores, Vancouver-based SSI’s ShipConstructor software, CATIA from Dassault Systèmes of France, and Nupas-Cadmatic, jointly owned by Numeriek Centrum Groningen B.V. of the Netherlands and Cadmatic Oy of Finland.
Part of the attraction is the recent uptick domestically in shipyard projects in multiple market sectors. “There are lots of projects on the commercial side – containers and bulk carriers, articulated tug barges and ferries and offshore supply vessels – there’s a lot going on,” says RADM Joe Carnevale (Ret), a senior defense advisor for Shipbuilders Council of America (SCA), which represents over 120 U.S. shipyard facilities.
“America in the recent past has had so many opportunities,” agreed Verónica Alonso, SENER North America Area Manager, “You need to offer something really good – with added value – to go into this market, and we think we have it.”
Moreover, Sener sees military contracting as a large part of the U.S. market, and feels it has gained the necessary experience to compete from its naval contracts in the UK in particular. “We are powerful in the market,” Alonso said. Still, she acknowledged that in America, it is very difficult [to break into the military market].

Military Maneuvers
“There aren’t that many military contracts out there, and it can take years to get out a bid,” cautioned one veteran naval architect, who asked not to be named. “They’ll have to convince a shipyard or naval architects doing the design, and the naval architect firm won’t do it unless the shipyard agrees.” On the plus side, most military ship classes don’t have the length of run of say the DDG 51 class, says Carnevale, adding that “from class to class, the Navy is willing to look at something new.’
And there are other priorities that could help Sener gain traction with FORAN, an integrated “complete” ship design and construction software platform. Carnevale says 3D CAD has taken a backseat to product lifecycle management (PLM), pointing out that once a ship is built, it’s the data in the PLM that matters. “A lot of what’s in the 3D CAD, no one is ever going to use again,” he explained. In his view, this leaves the market for 3D CAD wide open, giving Sener as good a chance as anyone else. “The test for FORAN is, is it compatible with Team Center, Siemens’ PLM product? It’s very popular with the military builders in the U.S., and will make them a candidate for ship yards using that product.”
Alonso claims Sener is in talks with some interested military shipyards, giving demos, taking meetings. “There is no signed contract, but we are in a process.”
SSI, meanwhile, claims it is used on the “overwhelming majority” of the U.S. Navy and U.S. Coast Guard programs with a few exceptions, such as Newport News, Electric Boat and GD BIW.
There are obstacles to overcome in the commercial market as well. “In the U.S., their biggest competitor is ShipConstructor. It is used at almost all the naval architect firms, most small-to-medium size shipyards and even a few of the big ones,” according to the naval architect. “In the really big yards, they’ll run into CATIA or Aveva.”

Popular Competitor
“ShipConstructor is popular because it is capable and less expensive. All you need is AutoCAD, the ShipConstructor package and a heavy duty PC with lots of memory and processing power,” he added.
The fact that it works on AutoCAD is huge, adds Carnevale. “People swap AutoCAD drawings all the time.”
The issue for shipyards, according to one user who asked to not be identified, is whether they want an application that is a one-stop shop – which is what Sener is pitching - and whether they are willing to pay big for it. Meanwhile, Sener is well aware of SSI’s market share, but thinks it has an alternative to offer.
“ShipConstructor is a good solution and has some advantages; it’s very well known,” conceded Alonso, but, she added, it is “not so complete or so advanced” as FORAN. “We have been in the market for many, many years, enough to give added value for shipyards to change. We offer a solution that is complete – 3D, single layer; you won’t see inconsistencies in production.”
SSI CEO Darren Larkins takes issue with the idea that FORAN is ‘more complete.’ “It’s true FORAN has an initial design capability(naval architecture, analysis) that we do not offer, but we read initial design data from any of these programs.” On the engineering side (basic/detail/production design) “we offer broad options driven by client demand.” Not only does ShipConstructor stack up to or best the competition when comparing apples to apples, says Larkins, but the company’s commitment to integrating with third-party vendors enables clients to be able to choose the vendor who best suits their needs.

Back to the Future
FORAN, the granddaddy of naval architecture applications on the eve of its 50th anniversary, has prior history in the North America. According to the naval architect, FORAN was used “a teeny bit” in the 1990s, at companies like the Philadelphia and the then Alabama shipyards and Canadian Shipbuilding & Engineering Ltd. As those contracts predate her tenure at Sener, Alonso said she can’t speak to why those relationships lapsed, other than to note that over time, most shipbuilding has migrated to Asia.
However, the company is determined to give North America another go. “We think we have something different to offer clients.”  Hence Sener took some initial steps late last year, forming a North American subsidiary (required to compete for naval contracts) and signing two contracts:

SSI, however, was quick to say that STX acquired FORAN for initial or basic design, and “not to replace the detail design work that is being done . . . with ShipConstructor. CEO Larkins added, “Eastern, a client since 2005, is still using ShipConstructor . . . to deliver the majority of their workloads,” which include the fifth in the Bravante PSV series, the fourth of six in the HOSMAX 310 series, an order for 4 Z-Tech tugs and an inland towboat, he added. The shipyard is also one of three companies in the running for the U.S. Coast Guard’s 11-vessel Offshore Patrol Cutter contract, which requires that the designs be done in ShipConstructor.
Technically, Larkins is correct. Eastern is currently using FORAN on just one project – two models of a multipurpose ship - and remains a committed user of ShipConstructor. However, the company is in the process of expanding its design capabilities, and was looking for a more integrated package. After looking at three to four options, it chose FORAN, says Fernando L. Malabet, Naval Architect & Marine Engineer, Vice President Engineering, at Eastern Shipbuilding.
Malabet, who joined Eastern 2011, leads Eastern’s team of designers, naval architects, mechanical and electrical engineers, a group he has so far grown into the equivalent of a medium size engineering firm. “We did not eliminate ShipConstructor. It has a series of advantages here in America, such as the availability of designers and things like that. We are keeping it and working on several projects still with that. For, example, we made a decision recently with a smaller tug boat, where the design was done, that it was easier to proceed in ShipConstructor.
According to Larkins, those advantages include Support for open architecture, which keeps its data accessible, Connection to Autodesk, a greater user base, and potential pool of already trained workers. Beyond this, SSI’s Larkins insists that older shipbuilding technologies, like FORAN, are typically either script-based or a hybrid of scripting and CAD modeling. This works well with typical (tanker) structures, but can be a weakness when dealing with more complex or non-typical shapes.
In terms of SQL Server support, Larkins maintains that Microsoft’s database is at least as capable as FORAN’s Oracle database, and is more commonly found in the shipyard environment. SSI also provides a single, centralized product data model. “Our database contains all the assembly, part and attribute data as well as the geometry model for the entire project.”
Nonetheless, Eastern wanted FORAN “because we wanted software that was fully integrated because soon the naval architects here, me and some others, will be designing vessels,” Malabet explained. By fully integrated, it means that within a single system, FORAN can handle all the initial concept, the design process, in 3D, not 2D, and later on, the production process. “It’s one of the key things that made me decide to use FORAN,” says Malabet. “For example, when I design a vessel, I go in and put all the surfaces, bulkheads etc., and look at in 3D, using modeling software called Rhino. Excellent software – love it – but you cannot use it to develop structural drawings or review CAD, it’s cumbersome, so now you have to jump into AutoCAD. In FORAN I can do all that from a single system.”
Despite the conventional wisdom that it is difficult for shipyards to support more than one design and construction package, given what some say are significant capital and training investments involved in switching CAD platforms, Malabet is unfazed, and unconvinced. “We get all types of clients with all kinds of designs and preferences. We do not dictate to the client how to do what he wants. We accommodate our process to their requirement. We’re here to please and follow specifications,” he said.
Of course, its first FORAN project, the multi-purpose vessels, involved new designs and hence Eastern didn’t migrate. It paired new people with the new designs and new software with some integration help from three Sener personnel on site at Eastern.
“ShipConstructor is very U.S.-based. The reason many yards here use it is because you have a lot of modelers trained in ShipConstructor – and none in FORAN. I was lucky to find some people trained in software similar to FORAN so their change to FORAN was much easier than from ShipConstructor to FORAN,” says Malabet.
The two products are not compatible with each other, but Eastern has had no library issues. It has created parallel parts and pieces in libraries for both software packages. “It’s fully operational on both.”  Malabet says it took a couple of people 30-45 days to create the libraries, something that is done for each specific vessel due to different types of equipment, material, fittings and the end cuts of stiffners.

FORAN Garners High Marks
“We have been assessing FORAN as we go along, and so far, so good, “says Malabet. Among the benefits he ticked off so far attributed to FORAN:

Regardless of how well FORAN continue to prove itself, Malabet expects that Ship Constructor either has or will shortly catch up to FORAN in some of these areas, either in its latest release or a future one. Regardless, he sees a role for both products at Eastern going forward.
At the end of the day, what shipyards look for is cost and capitalization versus ROI, says Carnevale. “If they can be shown that a product is easier to use, is less prone to error and more efficient, so that they will get their ROI for capital investment and training, shipyards will consider going to a new product.” 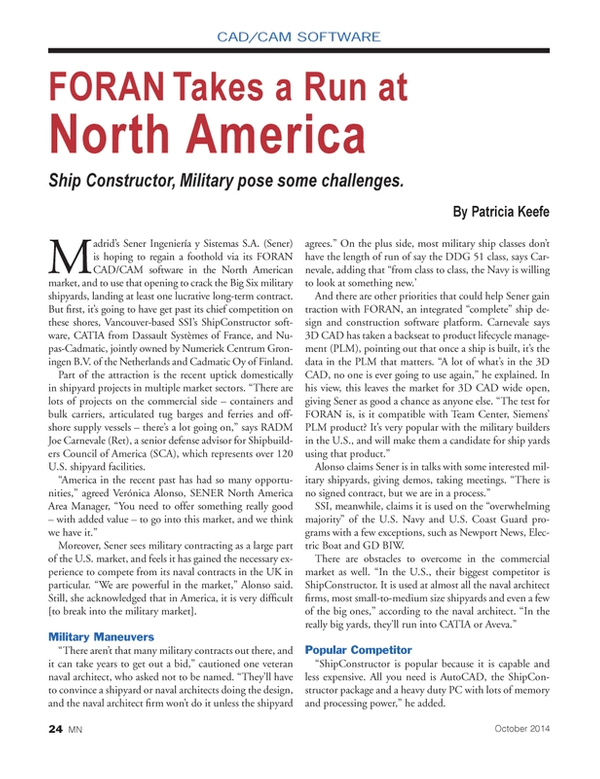