The International Salvage Union Weighs In

There have undoubtedly been great improvements in ship and operational safety in the past decades. SOLAS, the international Convention for the Safety of Life at Sea, has been in force for more than 30 years and has played a large part reducing the incidence of marine casualty. But accidents and incidents cannot be entirely eradicated and the potential for marine casualty – and pollution – remains present in all territories. Indeed, every few years there is an iconic casualty that seems to capture the public imagination and that of politicians.

While there remains the possibility of casualty, there is need for professional, experienced, well-equipped marine salvors. It is a fact that in most jurisdictions it is only the commercial salvors that have the wherewithal to response to maritime emergencies. The marine salvage industry, like all sectors, faces its special challenges and issues, some regulatory, some practical and some commercial.

Salvage: Local & Global
The way in which coastal states handle maritime emergencies varies. But one common theme has emerged in the past two decades. It is a zero-tolerance attitude to any environmental impact from shipping and shipping-related accidents. In many territories today, the loss of a just a few gallons of a potential pollutant is a serious matter. In the United States, the Exxon Valdez disaster in 1989 led to great changes, the final impact of which on the operation of tank and non-tank vessels in the U.S. has only been felt in the last two years. No one connected with shipping can be unaware of the Oil Pollution Act 1990 – OPA 90 – signed into law by President George Bush in the aftermath of the Exxon Valdez spill.

Salvage is governed by the 1989 Salvage Convention and for more than a century, all around the world emergency response to a casualty was conducted most commonly under the provisions of the Lloyd’s Open Form (LOF) salvage contract. A simple contract which enables the owner and insurers of a casualty vessel to engage salvors rapidly to conduct the operation without the need to agree terms “up front” and on the basis that the salvor will only be rewarded if successful. It is the so-called, “no cure, no pay” principle. After the job is successfully concluded, the salvor is paid based on the value of the property saved and taking account of the circumstances. If the salvor and owner cannot agree a fair reward, the contract allows for an arbitration process. 75 percent of LOF contracts are settled without the need for arbitration.

LOF: past, present – and future
LOF is used less often today than in the past but the International Salvage Union (ISU) – the global trade association for marine salvors – firmly believes it is the best contract for emergency response situations.

In the U.S., however, LOF is not used as much as in other places. It is partly because of the requirements of OPA 90 which mean that anyone operating vessels of all classes in US waters must have a pre-prepared Vessel Response Plan. The plan, which must be approved by the US Coast Guard, requires the owners or their agents to nominate a Qualified Individual to coordinate response to an emergency. They must also have in place an agreement with a capable and properly equipped contractor able to provide the required Salvage and Marine Firefighting Services (SMFF) in specific geographic areas if there is a need to respond to an emergency and undertake pollution response should there be an incident.

In some US response arrangements elements of the LOF contract might be used as a component of the contracting structure. But a “time and materials” basis is most common.

ISU suggests that in all locations – even in the OPA-90 environment – LOF is still the most appropriate contract for emergency response. It is well suited to high risk, high value jobs and use of its SCOPIC clause means that it is also suitable for low value cases. SCOPIC is the Special Compensation P&I Club Clause. It was introduced to ensure that salvors were still prepared to intervene in cases where the values might otherwise be too low to tempt them or the chance of a successful outcome is uncertain. SCOPIC does not provide a traditional salvage award but compensates the contractor for their efforts according to a schedule of prices for use of their personnel and equipment which is agreed regularly with the insurance industry.

Across the Pond
Internationally, there is much variance of approach to the command and control of shipping emergencies. Salvors, for their part, want clarity of accountability and decision making with a spirit of cooperation between all parties and no political interference in operational decisions. A model supported by the ISU is that of the U.K. under which the Secretary of State for Transport nominates a representative to make decisions about marine casualty interventions and wreck removal requirements – without political influence. The so-called SOSREP is powerful and in practice the system has worked well in handling numerous high-profile casualties.

In the U.S., the role of the U.S. Coast Guard Captain of the Port, linked to the requirements of OPA 90, also works well. That is not the case in many coastal states. It is a problem exemplified by the very current issue of “Places of Refuge.” A casualty vessel will often need to be brought to a Place of Refuge where its condition can be stabilized by, for example, carrying out emergency repairs or lightening her cargo. However, with all casualties there is the possibility of a spill of a pollutant and many coastal states are unwilling to allow a casualty to come to a Place of Refuge on their coast for fear of environmental damage if the vessel’s condition deteriorates.

It is a narrow view because to keep the vessel at sea will not improve the casualty’s condition and therefore creates the risk of any subsequent pollution spreading over a larger area – possibly along the coast of more than one country. There have been several recent, high profile cases where distressed vessels have struggled to find a Place of Refuge. In 2014, a chemical tanker, the Maritime Maisie, suffered a fire off the Republic of Korea. Japanese salvors attended the vessel to fight the fire and sought a Place of Refuge. Numerous applications to ports in RoK and Japan were turned down and it was only after the damaged vessel had been held at sea in poor conditions for more than three months that she was allowed into a port.

The ISU feels strongly that many coastal states are not meeting their obligations under existing international regulations and guidelines on the matter of Places of Refuge. There has been some recent progress in the European Union but nevertheless it remains a matter of concern and it is a concern shared equally by the ISU, the International Chamber of Shipping and the International Union of Marine Insurance.

Commercial marine salvors stand ready to intervene to save life; protect the environment and save property. They provide valuable services which protect the insurance industry from significant loss and in many cases they are the only ones with the equipment and capability to do so. But they need to be supported by sensible regulatory regimes and operational control arrangements that enable them to do the best they can in what are often difficult and dangerous circumstances.

The Author
Leendert Muller is President of the International Salvage Union and joint managing director of Multraship Towage and Salvage based at Terneuzen on the river Scheldt in the Netherlands. Mr. Muller started his career at sea and became a captain of tugboats rising to be Principal Salvage Master and he has been involved in many well-known salvage and emergency response operations. He is an Executive Committee member of the European Tug Owners’ Association (ETA) and a board member of the Royal Dutch Shipowners’ Association (KVNR). The International Salvage Union is the global trade association for marine salvors.

(As published in the October 2015 edition of Marine News - http://magazines.marinelink.com/Magazines/MaritimeNews) 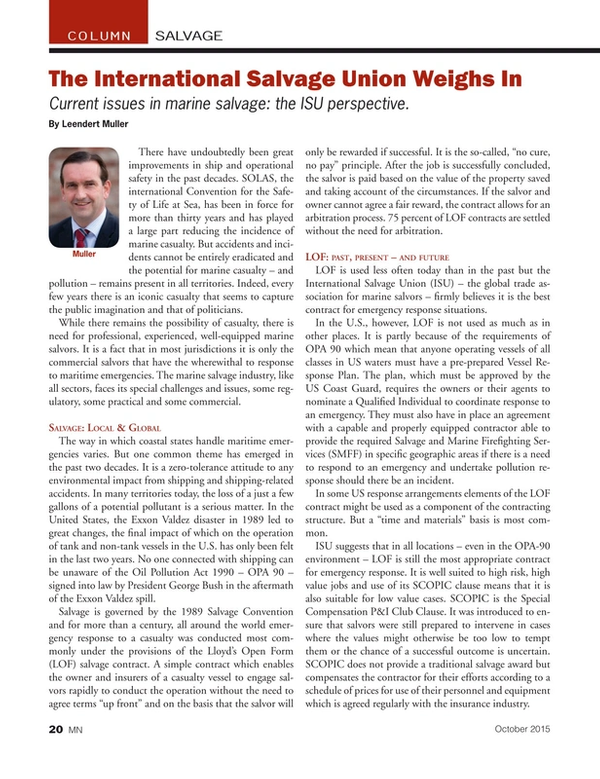