On the U.S. Gulf Coast, two well-regarded maritime education providers are expanding to meet growing local demand, while satisfying local employers with quality graduates. The sense of ‘community’ that they project is both real, and intentional.

Less than 350 miles apart, the ports of Houston and New Orleans handle all manners of marine commerce and cargoes, employ tens of thousands on the waterfront and collectively service an increasingly large percentage of the nation’s domestic and international marine traffic. As both ports deepen their channels and grow their facilities, the need for qualified mariners, dock workers and marine professionals has become more acute. In response, homegrown talent is emerging in both cities, trained locally and delivered directly to customers that need the help.

In both cities, that sense of community emanates, in part, from local community colleges, already providing a wide menu of marine training, but also expanding to meet new demands. Louisiana-based Delgado Community College is one such facility, having broken ground earlier this year on a new Delgado Maritime and Industrial Training Center. The $7 million state-funded project is expected to be completed by February 2016.

Separately, and located in close proximity to the Houston Ship Channel, the San Jacinto College Maritime Technology and Training Center is getting ready for this month’s debut. Construction has been ongoing since last Fall. The facility will serve as the site for certificate and associate degree maritime training delivered through U.S. Coast Guard-required and approved course work.

Both expansion projects will augment already robust maritime programs at the schools and increase enrollment and training capabilities. That they operate under the umbrella of a local community college system gives both local ties, measurable commitments to the cities that they serve, and real value to the brown water and inland commerce that thrives just minutes from their doorsteps.

At Delgado, courses can also be tailored to meet the specific needs of an individual company and the school boasts U.S. Coast Guard-approved training including full mission bridge simulator courses.

The Delgado Training Facility has been a U.S. Coast Guard approved facility since 1978, and is currently certified by such organizations as the International Association of Drilling Contractors and American Red Cross. Training is conducted for more than 8,500 students per year, serving local, regional, national and international companies. More than 90 courses are offered in marine firefighting and radar, industrial safety and emergency preparedness, most of which lead to industry-based certification. Located on 3.3 acres used for classroom, field and simulation training, the fire field contains 10 props used for both marine and industrial firefighting scenarios.

Targeting the inland waterways, Delgado targets training leading to stacked and latticed credentials, from entry-level deckhand positions to top-level captains. Eventually, 300 participants will have trained and obtained one or more industry credential. The program began in May 2014 and continues through 2016.

The soon-to-be-completed (March 2016) Maritime Center of Excellence will include a 23,000 square feet administration/education building and a 1,500 square foot saltwater pool with enclosure for expanded Water Survival, HUET, Able-Bodied Seaman and Lifeboatman training. The state-of-the-art building is intended to create a cutting-edge training facility to meet growing occupational needs of maritime, transportation and safety-related fields, as well as to provide a one-stop shop for licensing and certifications for inland waterways and offshore maritime clients. Delgado regularly reaches out into the local community, providing programs that articulate with secondary schools, four-year universities and industry apprenticeships.

According to Rick Schwab, Senior Director of the Maritime Program at Delgado, the new facility will bring growth. He explains, “Numbers have steadily increased over the years, with even higher enrollments expected to coincide with the new building expansion. The new center will have additional classroom space and increased classroom size. This will afford us the opportunity to take in more students at once and to offer a wider variety of training at any given time. In anticipation of this, there are several new programs in development that will be offered in the new building, such as QMED and Engine Resource Management.”

Delgado’s Regina Radosta told MarineNews in December, “For inland and coastal credentialed personnel / students, I would say that quality sets us apart from the competition. From course development to information delivery, every step is taken with care and attention to detail. The final result reflects every staff member’s most important questions: What is the pertinent information the participant will need? What is the best way to impart this information so that the student will retain it and be able to utilize it in the workplace?

San Jacinto College
In the considerable shadow cast by the San Jacinto Memorial, and overlooking the Houston Ship Channel, the San Jacinto College Maritime Technology and Training Center is in its final phase of construction. The facility will serve as the site for certificate and associate degree maritime training delivered through U.S. Coast Guard-required and approved course work. Maritime staff and faculty have already begun moving to the new Maritime Technology and Training Center based in La Porte, Texas.

The new facility includes three bridge simulators, all donated by the Houston Pilots. These ship control bridges are a part of a 3,748 square-foot simulation suite, complete with instructor stations, debrief classrooms and development stations. A full-mission engine room simulator is planned for the future and will interact and interconnect with the bridge simulators to allow vessel management exercises to accommodate deck and engineering officers and crew at the same time, in the same scenario.

The latest campus expansion, says San Jacinto’s maritime instructor Captain Amy Arrowood, has been the maritime program’s 10 percent annual growth which has outgrown the school’s current facilities located on Highway 225. But the maritime aspect of the school straddles both sides of the education equation – both academic and professional training. Arrowood explains, “Our maritime program has two sides. We have some students that are getting their associates degree and then we have the professional mariners that come in for endorsements, upgrades and renewals for their licenses and Coast Guard training. Right now, there are 42 students in the credit program actually studying to get their associates degree in Maritime Transportation.” And, says Arrowood, this particular degree in Maritime Transportation is geared towards those looking for positions on vessels.

Within the new facility, those programs will benefit from better sized and equipped classrooms, and some of most advanced and latest issue simulators on the market – a Kongsberg full mission bridge simulator, as well as an advanced Transas navigation lab. Here, radar and ECDIS will be taught leveraging the Transas equipment. Three bridge simulators, all capable of being interchanged as tugs, will be available to students. All of those simulators can interact with another within the same exercise.

Even limited to the previous, somewhat cramped spaces, San Jacinto issued a little over a thousand certificates in this past calendar year.

At San Jacinto College, the students in the associates programs are typically new to the industry. And, they serve the full gamut of demographics. Arrowood told MarineNews in December, “I’d say 85 percent know port, starboard, bow, stern, but that might be the extent of it. If they’re not right out of high school, they’re a year or two out. But we do have some with some prior sea time in some capacity – tanker men, or some military. We’ve got three students with prior military from the Navy and the Coast Guard.

Beyond this, San Jacinto’s industry ties are deep, they are meaningful, and they help to shape the very curriculum that the school delivers daily. Arrowood adds, “We work really close with Higman Marine, Buffalo Marine and Harley. We’re also really close with the Houston Pilots and G&H Towing. We have an advisory committee that works with us – we meet a couple times a year and they give us guidance and since they’re either sending their mariners – their employees – for training, as well as looking at new talent already studying at the school.” Those advisory meetings in turn produce course content that translates into real world skills, as well as more frequent offerings for courses and credentialing classes that are in high demand.

Unlike the maritime academies which focus largely on four-year bachelor degrees, augmented by a Marad-supplied training vessel, Arrowood says that San Jacinto depends on its industry partners for ‘internships.’ “It’s not like a maritime academy; we don’t have a training ship. So the students go out on commercial vessels for the summer, and then they come back, do the next fall and spring semester, then they go out and do another, their second internship. And then they would graduate in August of that second year.”

Captain Arrowood is quick to point out that when the students do graduate, they leave with that associates degree, and 12 Coast Guard-approved course completion certificates. “But, they’re not walking out of this program with a license, mostly due to the fact of not having enough sea time. They are typically graduating with about 120 days of sea time.” But, in the same breath, she insists, “What’s really cool about this program is that it’s not cookie cutter like the academies, where everyone’s either a third mate or a third assistant engineer.” San Jacinto students therefore work towards a variety of goals, including 100- or 200- ton master’s licenses, a tanker man position and some even want to work in the blue water industry – in which case, they’ll work towards their AB ticket first.

Arrowood sums up the San Jacinto College philosophy nicely, saying, “The students are our clients. But, the ultimate goal is for them to get a job, so that’s where it comes back to our advisory committee. That’s how it works. We now have 17 members, but we’re always looking for new support and new people to come in and help guide us in our program as it grows and expands.”

Community College Curriculum for Community Customers
Not everyone who wants to find and train for a career on the waterfront has the time, wherewithal and connections to travel far and wide to get the training that they need. On the U.S. Gulf Coast, increasing numbers of prospective marine employees and students no longer have to make that arduous journey. Aptly serving the communities that support them, Louisiana-based Delgado Community College and Houston’s San Jacinto College are both bringing expanded maritime training opportunities to the local waterfront. Leveraging recent, high-tech expansion projects, both schools can now promise that this won’t ever change. At the end of the day, isn’t that what community is all about? 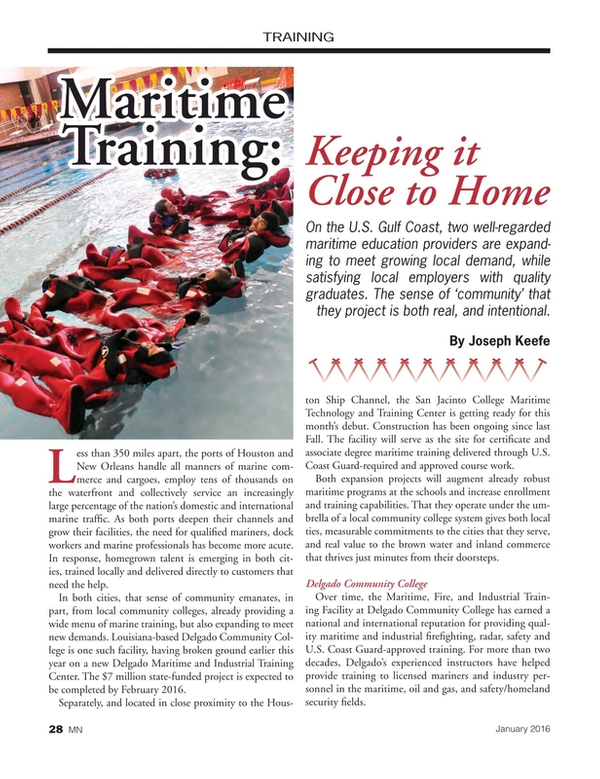