By Brigham A. McCown

Offshore energy presents a golden opportunity for Alaska and the United States.

As we enter the final quarter of the year, one of the last and most pressing pieces of business facing the Interior Department is to finalize its next offshore leasing program, which will specify exactly which parts of the United States’ Outer Continental Shelf will be open to oil and gas development between 2017 and 2022.
Having already cut the Atlantic from its proposed program back in March, the smoke signals coming from Washington suggest that the Administration is now considering doing the same with the two proposed Arctic lease sales, leaving the Gulf of Mexico as the only area of America’s OCS open for offshore energy development.
Such a decision would have wide ranging and significant implications for a number of maritime industries. That’s because of all of the places around the world where the oil and gas industry operates; there are few which will require more equipment and support services than the Arctic.
To take Shell’s previous campaign in the Chukchi Sea as a single example, it included two icebreakers, two drilling units, two ice management vessels, three anchor handlers, three offshore support vessels, two oil spill response tugs, three helicopters and three aircraft - including one solely dedicated to ice reconnaissance, all part of a flotilla which numbered more than 30 boats and aircraft.
The ripple effects of offshore drilling in the Arctic extend far beyond the region however, creating opportunities thousands of miles away, from Seattle to Maine and beyond. Ports in the Puget Sound area, a maritime and industrial hub that has supported resource development in Alaska for more than a hundred years, host many of the support vessels bound for the Arctic. Stevedores, electricians, welders, engineers, hydraulic technicians and equipment operators there, will all play an essential role in preparing the different vessels by providing fuel, specialized equipment and repair and maintenance services. In total, Shell spent $313 million supporting its Alaska program there, between 2006 and 2014.
Importantly, energy development in the Arctic could also play a major role in bolstering Alaska’s offshore infrastructure. In a 2015 Department of Energy commissioned report on the subject; the National Petroleum Council noted the “many synergies between the types of infrastructure that would facilitate Arctic oil and gas exploration and development and the infrastructure needs of local communities, the state of Alaska, and elements of the U.S. Forces such as the Coast Guard and Navy.”
These synergies have played out in real time on at least two occasions in recent years, when the Coast Guard has had to rely on industry to conduct rescue missions for other vessels stranded in the area. As a former Mayor of Dutch Harbor surmised the situation, “Shell’s substantial support vessels are some of the only emergency response assets we have in the Arctic now.” Make that had in the Alaskan Arctic.
This argument is true for all facets of Arctic infrastructure, but is especially worth noting in the case of oil spill response. It’s only through investment by industry that the Arctic will develop a comprehensive international spill prevention and response plan. That may sound counterintuitive, but there is a real need for such an agreement; Russia and other countries continue to develop their own Arctic resources and at present there is very little in the way of an integrated, international response strategy.
Oil spills do not respect international boundaries clearly, so the United States should lead the way in creating a robust set of regulations which lay out exactly how industry must respond in the event of a spill. We can only claim a mandate to develop those if we allow development in our own section of the Arctic.
A first step towards that goal may have come with the Administration’s recent announcement of region specific Arctic offshore drilling regulations. While some of these regulations will likely need to be adjusted as new technologies come on line, they hopefully mark a start in the process of finding the delicate but essential balance between resource development and conservation. As numerous Native groups have argued, the two are not mutually exclusive; if anything they are the twin pillars which will be vital to support local Alaskan communities in the future.
The critical point is that the Administration should be looking for ways to stimulate, not impede, industry from making investments in the Arctic. Given the very long lead in times needed to develop offshore resources – at least a decade according to most industry experts – cutting the leases will have precisely the opposite impact. Not only will it effectively ban any offshore activity in the region for the next 20 years, it will start a domino effect across a host of maritime and support services, derailing Alaska’s economy and symbolically hanging a “Closed for Business” sign on the door.
Conversely including the Arctic in the final plan will help to safeguard the region’s future, facilitating investment by multiple Government departments and providing a justification for the private sector to continue to build out the State’s infrastructure all the way through until the first proposed leasing round in 2020. Doing so will bring a swathe of benefits not just for local people, but for businesses and communities across the entire country. The Interior Department must embrace this golden opportunity.
The Author
Brigham A. McCown has more than 25 years of executive management, legal, and operational experience at the local, national, and international levels of government. He previously served as the first acting administrator and interim CEO of the Pipeline and Hazardous Materials Safety Administration (PHMSA). While in this position, McCown was in charge of the federal government’s oversight of more than one million daily shipments of hazardous materials by all modes of transportation, including pipeline. Mr. McCown graduated from Miami University in 1988 with a degree in diplomacy and foreign affairs and later went on to receive his law degree from Northern Kentucky University in 1997.
(As published in the October 2016 edition of Marine News) 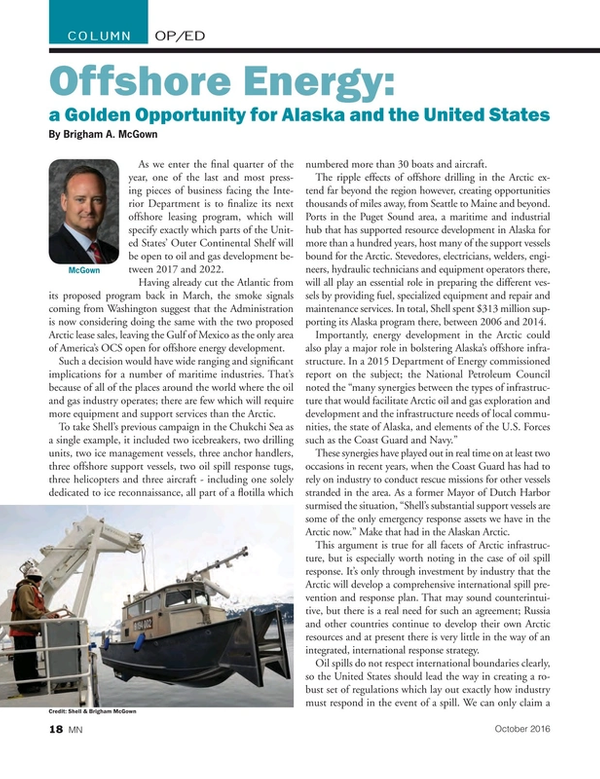