Lately, I have been reading reports regarding the United States Coast Guard’s (USCG) escalating enforcement of ballast water discharge violations. In the first case, the USCG initiated a civil penalty proceeding against a bulk carrier for discharging ballast water in Washington State without using a USCG Type Approved Ballast Water Management System (BWMS) or other approved means. The USCG proposed the maximum penalty of $38,175. In a more recent case, the USCG issued a $5,000 fine for a similar unauthorized ballast water discharge in Oregon. In both situations, the violations were discovered during routine port state control (PSC) BWM examinations.

Beyond the obvious fines or delays in vessel schedules, there are imminent risks to the shipowner associated with the USCG’s current focus on BWMS violations. First, there are many BWMS currently onboard vessels that either do not work at all or are so temperamental that the ship’s crew has not been able to operate them properly. ABS recently issued a report indicating as many as 45 percent of installed BWMS are not operating as intended. Factors such as ballast water salinity, temperature and turbidity can adversely impact the performance of some systems, particularly if the crew is not experienced enough to make the necessary operational adjustments for the system to meet the regulatory requirements.
Perhaps more importantly, there is the risk that the vessel’s crew becomes so frustrated with a BWMS that is difficult to operate that they simply stop using them. In a worse-case scenario, a disgruntled crew member may believe there is the potential for a monetary windfall as a “whistleblower” by reporting a malfunctioning system or the discharge of untreated ballast water to the USCG PSC inspectors. The maritime community is all too familiar with the huge awards some crew members have obtained by reporting oil discharge violations in “magic pipe” cases. In April 2017, a cruise line was ordered to pay more than $40 million for illegally discharging oil and falsification of records. The engineer who reported and turned over evidence to the USCG was awarded $1 million.
Fortunately for vessel owners, the same whistleblower regulations used in “magic pipe” cases do not apply in the ballast water context. More specifically, the Act to Prevent Pollution From Ships (APPS, 33 USC 1905-1915) only applies to MARPOL violations, not ballast water discharges. Interestingly, and although many may not be aware, the specific whistleblower statute, 33 USC 1908 (a), applies to more than oil discharges, including chemicals, garbage and sewage, but clearly not to untreated ballast water.
In light of the above, my advice to shipowners performing research for their BWMS installations or retrofits is to look for systems that both work well and are easy to operate. If the crew is not properly operating the BWMS and keeping up-to-date records of ballast water discharges the USCG will likely hold the vessel for an extended period and also penalize it with a substantial fine. Shipowners should also ensure that their crews are properly trained to operate their BWMS and not just at the first commissioning. Are you choosing a BWMS manufacturer that has training programs or centers that are set up to train future crews at each level of technical ability needed, from crew to chief engineer? Owners don’t want to repeat the difficulties of the past related to oil water separators, which led to crews bypassing systems with magic pipes, resulting in whistleblowers and ultimately large fines.
Thankfully, the whistleblower risk is remote, but the risk of lengthy delays and fines from the USCG, as evidenced by the two recent cases in Washington and Oregon, is becoming more common. Further, the fines or delays at port can be substantial and may not be covered by Protection and Indemnity (P&I) insurance. Vessel owners should understand that P&I cover for fines involving non-compliance with BWM regulations, except for accidental discharges, are discretionary (similar to MARPOL magic pipe violations). In such cases, to obtain coverage for the fine, the shipowner is required to satisfy the P&I Club that all reasonable steps were taken to avoid the BWM violation.
Even with today’s generally poor freight rates, I urge shipowners to start the process of choosing a BWMS now. While the installation of systems on the global level has been delayed due to the ruling at MEPC 71, this delay is not the case for ships sailing in U.S. waters. The USCG regulations specifically require compliance at the first scheduled dry-dock after January 1, 2016 for existing ships, and at delivery for newbuilds. Before any type approved systems were available, the USCG allowed shipowners to apply for an extension on a blanket basis. Now, as of September 2017, there are five USCG approved systems with varying technologies. Fortunately, the USCG has not removed the extension option completely, but obtaining an extension due to the lack of approved systems is no longer an option. Further, the extension process is now more difficult and less straightforward; shipowners must demonstrate that none of the approved BWMS are suitable for their vessel, as per 33 C.F.R. § 151.2036. An extension may only be granted where the shipowner can clearly document that “despite all efforts,” compliance is not possible.
Fortunately, the current regulations do not allow whistleblower windfalls for ballast water violations. However, that benefit does not offset owners’ current time sensitive dilemma. They are going to need all the time available to evaluate and select (including preparing engineering drawings and obtaining class approval), as well as install an easy-to-use, cost effective USCG Type Approved BWMS. Even with the MEPC 71 extended implementation schedule and the USCG’s possible, but amorphous extension program, complying in a timely fashion is no easy task. The best advice for owners struggling with the BWMS issue is simply to act now. There really is no time to wait, it is simply not worth the risks, and particularly considering the USCG’s recent stepped up enforcement.
The Author
Steve Candito is the CEO of Ecochlor, Inc. Prior to joining Ecochlor, Steve was Founder, President and CEO of Foresea Consulting where he provided various advisory services including strategic planning, regulatory compliance and crisis management to the maritime and environmental communities. Before Foresea, he was President and CEO of National Response Corporation (NRC). During his 20+ years at NRC he grew the business from a start-up to a leading global emergency response and environmental services firm. Steve graduated from Hofstra University School of Law and the United States Merchant Marine Academy.
(As published in the October 2017 edition of Marine News) 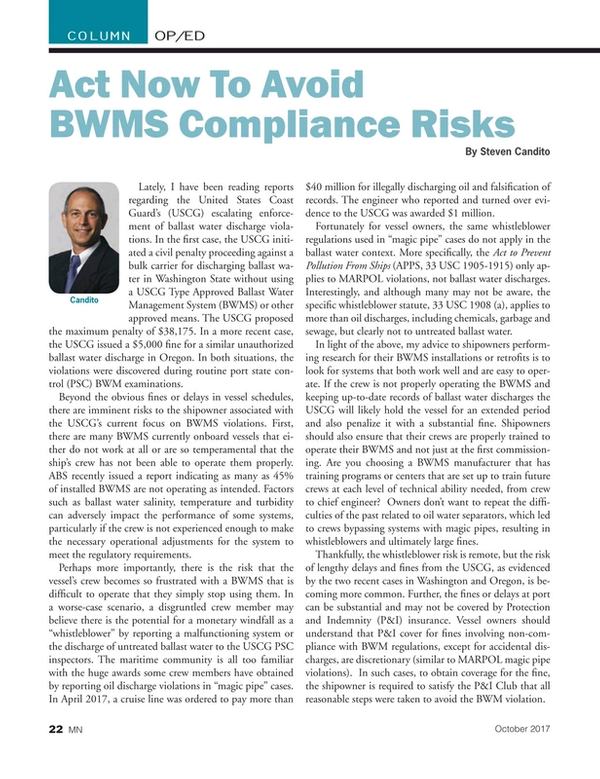