Dynamically Positioned for the Future

In early September, the Offshore Service Vessel Dynamic Positioning Authority (OSVDPA) announced that the Texas A&M Maritime Academy at Texas A&M University at Galveston was now the first maritime academy in the nation accredited to provide OSVDPA courses to its cadets. For any U.S. maritime academy, most if not all of them traditionally focused on sending out graduates ready for blue water, deep water service, this represents a sea change in training. On the other hand, what better place to start than the U.S. academy closest in proximity to the heart of the domestic offshore energy industry, and indeed, the heaviest concentration of DP equipped support vessels?

In announcing the accreditation, OSVDPA Executive Director, Aaron Smith said, “Going into the accreditation process we obviously knew of A&M’s reputation as a great maritime training institution, but they surpassed even those lofty expectations. We were extremely impressed with A&M’s instructors, curriculum and equipment. Giving cadets access to top-notch training early in their career will pay great dividends toward the safety of our industry.

“Our partnership with OSVDPA is the result of years of putting all the pieces into place,” said Captain Augusta Roth, department head of Marine Transportation at the Texas A&M Maritime Academy. “The right equipment, the right facilities and the right people have all come together to make this happen.”

The Texas A&M Maritime Academy is one of seven maritime academies in the United States – six state-run and one federally operated. All of these schools in the past have focused much of their training resources on producing unlimited tonnage, blue water mariners. That’s changing, to a large extent a function of the fact that the U.S. domestic blue water fleet has dwindled to record low numbers. On the other hand, more that 98 percent of the nation’s merchant hulls can be classified as brown water. An increasing number of those also employ dynamic positioning as an important part of their equipment mix.

Defining DP
Dynamic positioning (DP) is a computer-controlled system to automatically maintain a ship’s position and heading.  Information from the ship’s propellers and thrusters and data from sensors for wind and motion are combined with gyrocompass data to give a computer the vessel's position. This information allows the computer to calculate the required steering angle and thruster output to match the ocean’s current conditions. Some, but not all, vessels it is used aboard include: offshore supply vessels, drillships, semi-submersibles, turbine installation vessels, cruise ships, cable layers, dredges, shuttle tankers, military vessels, heavy lift vessels, FPSOs, FLNGs, dive support vessels and wind farm servicing ships.

For cadets to receive an OSVDPA DPO (DP Operator) Certificate they must successfully complete two classroom courses, the first of which covers the theoretical knowledge behind DP operations and the second offers hands on DP experience via the utilization of DP simulators.
Additionally, the OSVDPA requires mariners to pass a series of assessments as they progress through the phases of the OSVDPA DPO Certification.  These assessments range from a multiple-choice style test following Phase 1, to practical assessments following Phases 3, 4 and 5.

To achieve accreditation, the Texas A&M Maritime Academy was required to submit a package of forms describing its operation, curriculum, facilities, simulators and instructors. Once submitted, OSVDPA staff and an independent OSVDPA-Approved Auditor conducted intensive document review and a Site Visit to ensure that the facility and its simulators met OSVDPA standards. They did. Beyond this, OSVDPA conducted assessments of Captain Kate Fossati – one of two Texas A&M DP instructors – to benchmark her knowledge of the DP theory, her practical DP operational abilities, as well has her ability to use a DP simulator as an instructional tool.

Why Texas – Why Now?
As the first U.S. Maritime Academy credentialed to teach accredited DP courses, the DP certification is an important step, especially when considering the U.S. training academies – who are all slowly integrating a workboat curriculum into their offerings – have primarily catered to the blue water side of the equation for so long.

Admiral Michael Rodriguez, Superintendent of Texas A&M Maritime Academy, explained the move, saying, “The geographical location of Texas A&M Maritime Academy in Galveston, Texas, makes it the go to academy for well-trained third mates to work in the brown water, oil patch, and coastal towing industries. Students who are considering a career in the oil industry, especially OSVs and drilling rigs, will look at the DP training offered here and understand the importance relative to getting a job in the industry and being successful.

At a time when the U.S. Maritime Administration has made it clear that they need blue water mariners – indeed, Marad Chief Buzby wants ROI for his training ship program – the U.S. merchant fleet today consists of some 40,000 hulls; 98% of which can be described as brown water and/or workboat-sized vessels. A&M’s Roth acknowledges the many mission needs of industry, but says flatly, “We are training for tomorrow. We are situated in the bull’s-eye of the inland and oil patch industries and feel this puts us in a unique position to fill the future needs of the workboat industry. This sector of the industry is recognizing the part we can play in their future operational success. Accordingly, we are aggressively modifying our curriculum, which includes OSVDPA accreditation, to address industry needs.”

Similarly, the cadets also ‘get it.’ And, while the DP curriculum is an elective course, demand is growing. As MarineNews went to press, there was a waiting list, and it is getting longer. Hence, says Roth, more sections of the course in the future may be considered.

Supporting the nascent program in Galveston, a total of six Class C Simulators with a master station, were purchased from Kongsberg. And, that’s important because Kongsberg has positioned itself as an industry leader in this technology, with countless installations worldwide on working vessels, supported by dozens of training centers employing Kongsberg equipment.

Armed with the new training opportunities, graduating cadets will hit the ground running with not only a third mate unlimited license, but also their OSVDPA Class C Permit, and be sixty sea days and one assessment away from a full DPO certificate.

The OSVDPA training regimen includes four phases: classroom, sea time, classroom, and sea time, with assessments at each step. Students are now taking the first phase of classroom instruction at TAMMA. After completion of first phase, they may go out on a commercial DP vessel for the second phase of sea time. Upon completion of the final two phases, they are eligible to apply for an OSVDPA Class C Permit, which is the OSVDPA term for a Junior DPO.

The new focus on DP comes at a critical time. The seismic downturn in the offshore oil industry beached many mariners, created a vast void in well trained personnel and now presents a problem as the offshore oil industry stirs to life. Knowing that the slow recovery is also creating job opportunities, Texas A&M and OSVDPA wanted to be in position to satisfy industry demands. Captain Kate Fossati told MarineNews, “We recognized this and wanted to be proactive in addressing the needs of companies to fill the personnel void created by the downturn. We were pleased to work with industry to figure out what those needs were, and design programs to meet them. OSVDPA accreditation became the cornerstone of that effort.”

A Logical First Step
Texas A&M could have partnered with other accreditation bodies, but in the end, they turned to the Gulf Coast-based OSVDPA. The mission of the OSVDPA is to improve the safety of dynamic positioning operations by providing a pathway to training and certification for all of those who use dynamic positioning. The availability of OSVDPA to locally and quickly address training issues or concerns relative to that certification was a key component of the school’s decision to move forward with them.

Admiral Rodriguez added, “Their number one concern is improving safe operations in the Gulf of Mexico region through a rigorous DP training program. That matches very well with our mission.”

For her part, Chief Mate Kate Fossati, assistant Marine Transportation professor at the Texas A&M Maritime Academy and the instructor approved to teach the OSVDPA courses, was also excited about the accreditation.  “As an alumna of Texas A&M who sailed as a DPO, I know what having that certificate does to a cadet’s job prospects.  I am very proud that our cadets will be able to start the certification process while they are here, something that they used to have to wait until graduation and pay out-of-pocket to do.”

Rodriguez summed up the path ahead by declaring, “I am so proud of Captain Roth and Professor Fossati. They got the demand signal from our industry partners and made this happen. It’s a win for all … our cadets, the academy, OSVDPA and the entire maritime industry.” 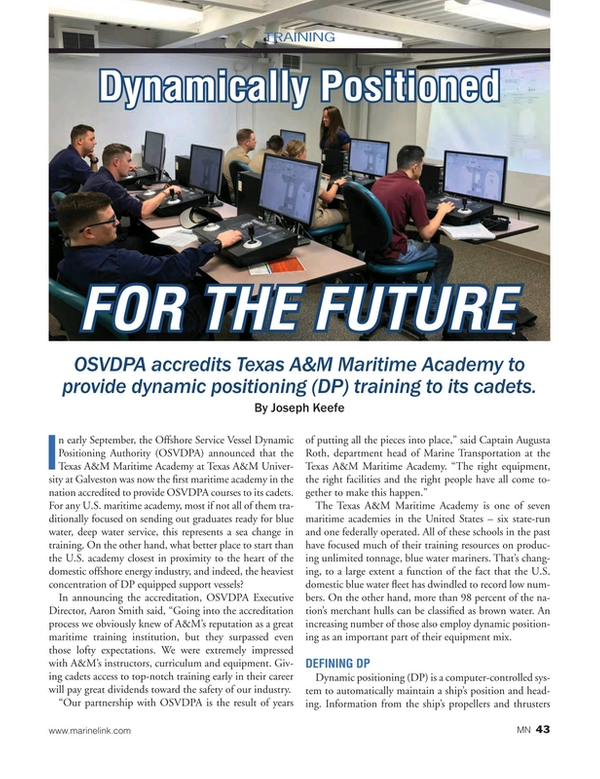 Read Dynamically Positioned for the Future in Pdf, Flash or Html5 edition of October 2018 Marine News