Issued at the National Quality Steering Committee (NQSC) meeting on July 31, 2018, the American Waterway Operators (AWO) and the U.S. Coast Guard (USCG) issued their annual report that benchmarks and further serves as the annual safety report card for the domestic towing industry. This year, it comes at a particularly timely moment, just on the heels of the deadline for the so-called ‘subchapter M’ towboat rules.

The NQSC uses three measures to track overall trends in safety and environmental protection. These useful indicators of towing industry trends include (a.) Crew fatalities per 100,000 towing industry workers, (b.) Gallons of oil spilled from tank barges per million gallons transported, and (c.) The number and severity of towing vessel casualties. Scouring towing industry data and measures for calendar years 1994 to 2017 the report also includes summary statistics on crewmember injuries, which the NQSC began tracking in 2006. With subchapter M codified as a means to bring (better) safety to more than 5,000 previously uninspected vessels, it will be interesting to see what the future brings in that regard. Arguably, the industry has done a pretty good job of policing itself over time.

Crew Fatalities
In 2017, there were six operational towing vessel crew fatalities. While 13 deaths were reported to the Coast Guard aboard freight carrying towing vessels in 2017, only six were related to towing operations. The others were due to existing medical conditions (6) and an accidental overdose (1). Hence, as can be seen in Chart 1, the rate of fatalities aboard U.S. towboats continues to trend downwards. Crew Fatality Rate is calculated using the “Mercer Model”, developed with AWO-funded research. The denominator for this rate is derived from the number of towing vessels in operation, as reported by the U.S. Army Corps of Engineers (USACE). As with some government generated data, USACE numbers lag one calendar year behind USCG data. Therefore, the 2016 USACE data is used with the 2017 crew fatality number to project the 2017 crew fatality rate. Table 1 shows the fatality rates per 100,000 FTE calculated by the Bureau of Labor Statistics (BLS) for all workers from 2012 to 2016. Additionally, Table 1 shows the fatality rates for the transportation sector and towing industry. For 2016, the towing industry fatality rate is 8.6, which is approximately half the transportation sector and double the rate for all fatal work injuries. It’s a dangerous world out there.

On the environmental front, the USCG reported 84,319 gallons of oil were spilled as a result of 49 tank barge pollution incidents in 2017. Chart 5 shows the total gallon quantity of oil spilled from tank barges for calendar years 1994 to 2017. The largest spill was the result of an explosion and fire aboard a barge at an Aransas Pass anchorage. This incident accounted for 95% of the total oil spilled in 2017, and had it not occurred, the continued downward trend of the collective inland towboat sector would have been obvious. Indeed, and while even one barrel spilled is one too many, three spills accounted for 99% of the total volume of oil spilled from tank barges in 2017. To say that the industry, over the past 20 years, has exponentially cleaned up its environmental signature would not give nearly enough credit to those firms providing service in this sector.

In terms of safety itself, a vessel incident is defined as a casualty involving a towing vessel or barge engaged in carrying freight. Incidents where ONLY a crew member death, injury, or operational tank barge spill occurred, without a precipitating or associated towing vessel or barge incident, are not included in this measure since they are included in other sections of the report. Chart 7 shows the number of towing vessel incidents reported and classified by the AWO-USCG Severity Scale. The Severity Scale, was developed by the NQSC to assist in the classification of these incidents. Towing vessel incidents include ALL reportable marine casualties that involve a towing vessel or barge involved in freight movements. Tugs and barges involved in the construction, dredging, and industrial services are not included. Each incident is counted only once, regardless of the number of involved vessels or recorded events.

In 2017, there were 934 towing vessel incidents, of which 82% were classified as low severity incidents. Medium and high severity incidents represented 10% and 8%, respectively. There was a 24% decrease in investigated towing vessel incidents from 2016 to 2017 and, looking at the chart, this continues a trend which has been in a downward pattern since 2011. Will the advent of SubM bring more in the way of improvement? Only time will tell. Other maritime industry segments have experienced a similar decrease in the number of reported incidents as a result of NVIC 01-15. From 2014 through 2017, there has been a 45% reduction in ALL Reportable Marine Casualties reported to the Coast Guard. Over those same years, the towing vessel industry has experienced a 48% reduction in reported incidents, or slightly better than the industry mean.

In 2005, the Coast Guard began documenting injury severity with each incident investigation. From 2006 to 2017, the overall percentage of minor and moderate severity injuries remains at 72%. This category’s good news stories are that no injury in 2017 reached the critical severity level, and that the share of moderate severity injuries has decreased by 1% relative to the share of minor severity injuries. All other severity categories remained at the same percentage level between 2016 and 2017. Accident types most associated with injuries in the ‘most significant’ category in frequency order include a fall onto a surface; Line handling/caught in lines; crushed between objects, and finally, struck by a moving object.

The most significant ‘take-away’ from this annual report is that the towing industry is in a process of continual improvement – with notable and rare caveats – and in terms of safety and environmental performance, it continues to get better. In theory, the advent of the Subchapter M towboat rules should accelerate that pace. That said; it is tough to move the needle from an already enviable record. Time will tell. Stay tuned – we’ll be here to catalog it as it unfolds. 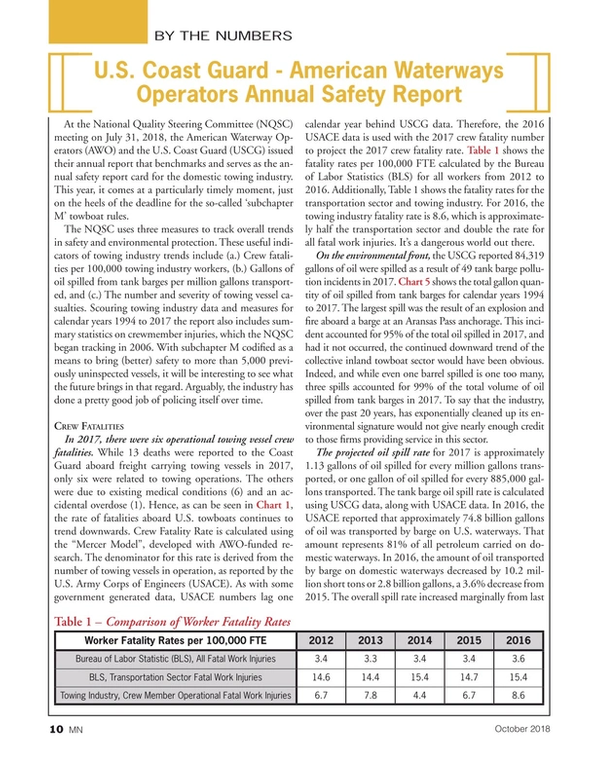