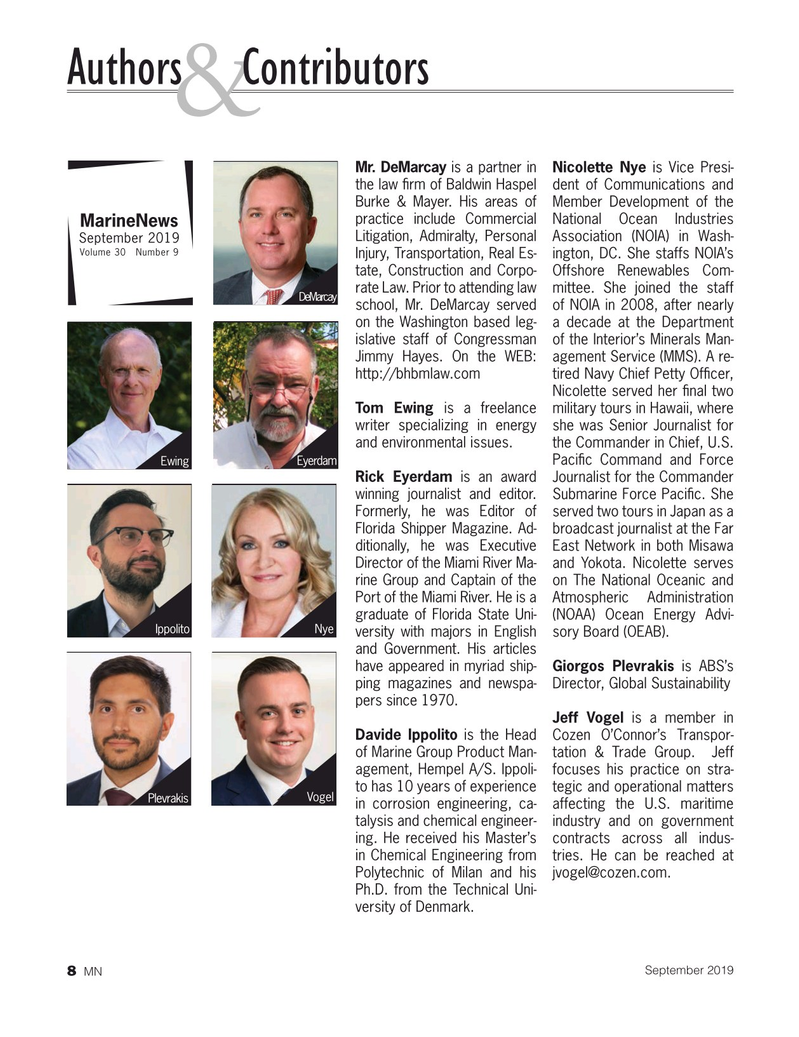 Mr. DeMarcay is a partner in Nicolette Nye is Vice Presi- the law ? rm of Baldwin Haspel dent of Communications and

Burke & Mayer. His areas of Member Development of the practice include Commercial National Ocean Industries

DeMarcay school, Mr. DeMarcay served of NOIA in 2008, after nearly on the Washington based leg- a decade at the Department islative staff of Congressman of the Interior’s Minerals Man-

Tom Ewing is a freelance military tours in Hawaii, where writer specializing in energy she was Senior Journalist for and environmental issues. the Commander in Chief, U.S.

Rick Eyerdam is an award Journalist for the Commander winning journalist and editor. Submarine Force Paci? c. She

Formerly, he was Editor of served two tours in Japan as a

Florida Shipper Magazine. Ad- broadcast journalist at the Far ditionally, he was Executive East Network in both Misawa

Director of the Miami River Ma- and Yokota. Nicolette serves rine Group and Captain of the on The National Oceanic and

Port of the Miami River. He is a Atmospheric Administration graduate of Florida State Uni- (NOAA) Ocean Energy Advi-

Ippolito Nye versity with majors in English sory Board (OEAB).

and Government. His articles have appeared in myriad ship- Giorgos Plevrakis is ABS’s ping magazines and newspa- Director, Global Sustainability pers since 1970.

Jeff Vogel is a member in

Plevrakis in corrosion engineering, ca- affecting the U.S. maritime talysis and chemical engineer- industry and on government ing. He received his Master’s contracts across all indus- in Chemical Engineering from tries. He can be reached at

Polytechnic of Milan and his jvogel@cozen.com.

Ph.D. from the Technical Uni- versity of Denmark.