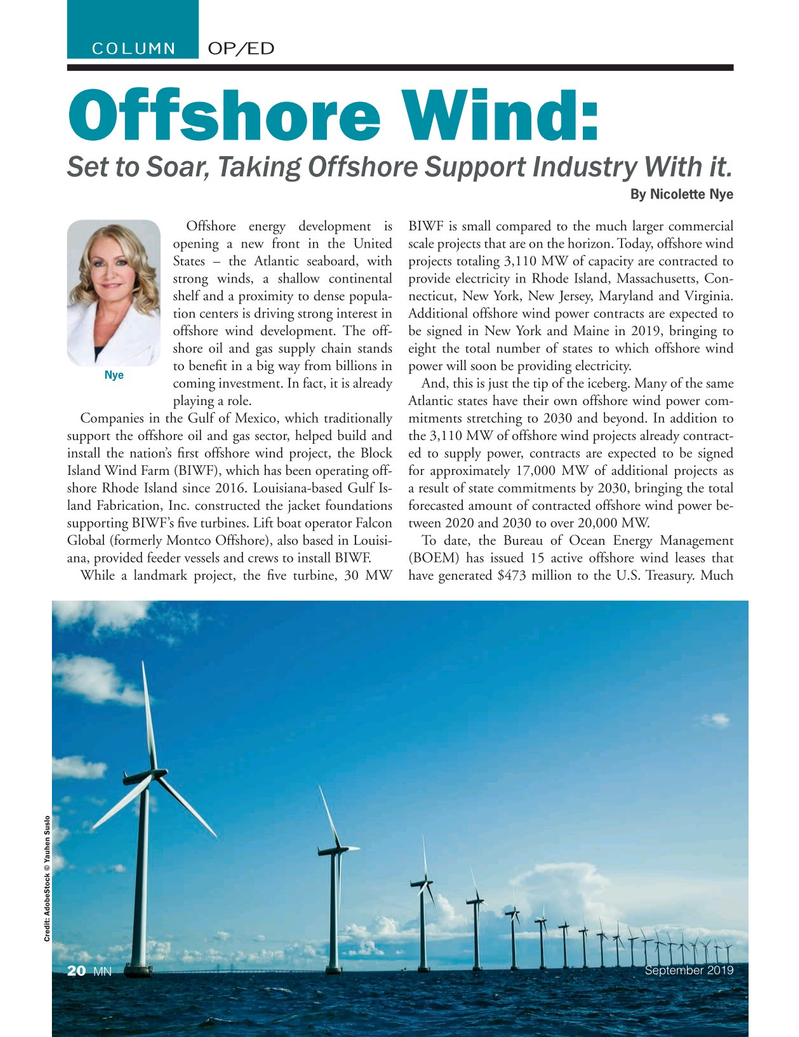 Set to Soar, Taking Offshore Support Industry With it.

Offshore energy development is BIWF is small compared to the much larger commercial opening a new front in the United scale projects that are on the horizon. Today, offshore wind

States – the Atlantic seaboard, with projects totaling 3,110 MW of capacity are contracted to strong winds, a shallow continental provide electricity in Rhode Island, Massachusetts, Con- shelf and a proximity to dense popula- necticut, New York, New Jersey, Maryland and Virginia. tion centers is driving strong interest in Additional offshore wind power contracts are expected to offshore wind development. The off- be signed in New York and Maine in 2019, bringing to shore oil and gas supply chain stands eight the total number of states to which offshore wind to bene? t in a big way from billions in power will soon be providing electricity.

Nye coming investment. In fact, it is already And, this is just the tip of the iceberg. Many of the same playing a role. Atlantic states have their own offshore wind power com-

Companies in the Gulf of Mexico, which traditionally mitments stretching to 2030 and beyond. In addition to support the offshore oil and gas sector, helped build and the 3,110 MW of offshore wind projects already contract- install the nation’s ? rst offshore wind project, the Block ed to supply power, contracts are expected to be signed

Island Wind Farm (BIWF), which has been operating off- for approximately 17,000 MW of additional projects as shore Rhode Island since 2016. Louisiana-based Gulf Is- a result of state commitments by 2030, bringing the total land Fabrication, Inc. constructed the jacket foundations forecasted amount of contracted offshore wind power be- supporting BIWF’s ? ve turbines. Lift boat operator Falcon tween 2020 and 2030 to over 20,000 MW.

While a landmark project, the ? ve turbine, 30 MW have generated $473 million to the U.S. Treasury. Much