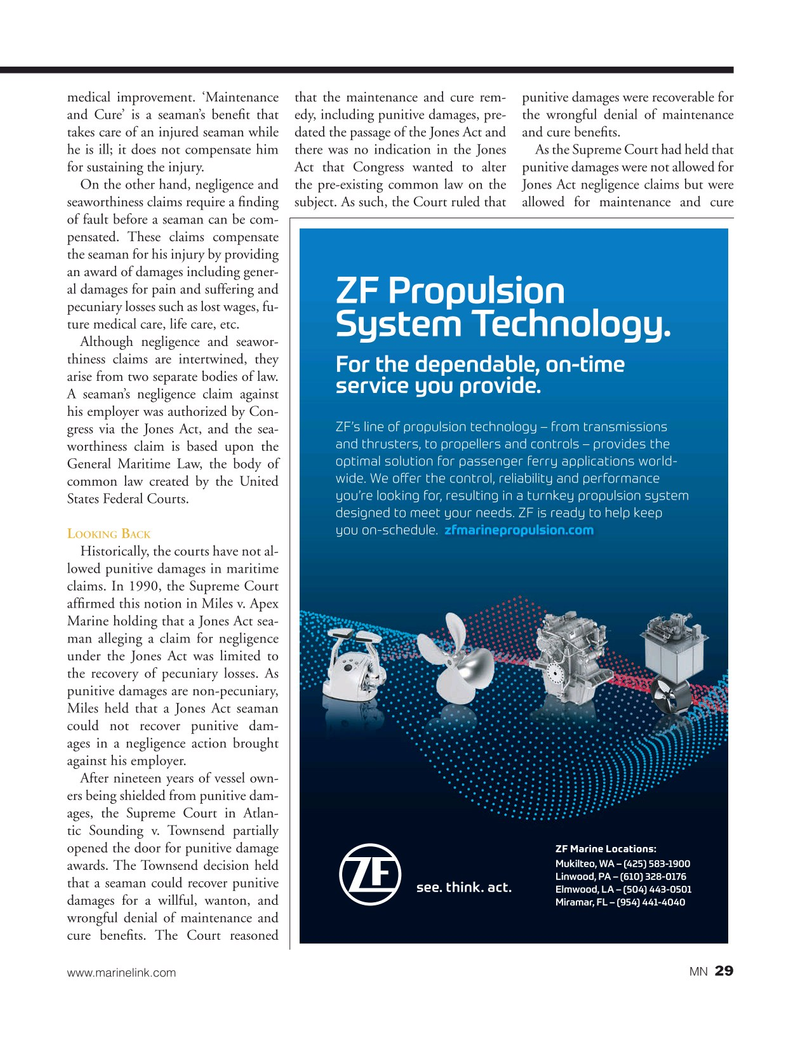 medical improvement. ‘Maintenance that the maintenance and cure rem- punitive damages were recoverable for and Cure’ is a seaman’s bene? t that edy, including punitive damages, pre- the wrongful denial of maintenance takes care of an injured seaman while dated the passage of the Jones Act and and cure bene? ts.

he is ill; it does not compensate him there was no indication in the Jones As the Supreme Court had held that for sustaining the injury. Act that Congress wanted to alter punitive damages were not allowed for

On the other hand, negligence and the pre-existing common law on the Jones Act negligence claims but were seaworthiness claims require a ? nding subject. As such, the Court ruled that allowed for maintenance and cure of fault before a seaman can be com- pensated. These claims compensate the seaman for his injury by providing an award of damages including gener- al damages for pain and suffering and

For the dependable, on-time arise from two separate bodies of law. service you provide.

ZF’s line of propulsion technology – from transmissions gress via the Jones Act, and the sea- and thrusters, to propellers and controls – provides the worthiness claim is based upon the optimal solution for passenger ferry applications world-

General Maritime Law, the body of

ZLGH:HR?HUWKHFRQWUROUHOLDELOLW\DQGSHUIRUPDQFH common law created by the United you’re looking for, resulting in a turnkey propulsion system

Historically, the courts have not al- lowed punitive damages in maritime claims. In 1990, the Supreme Court af? rmed this notion in Miles v. Apex

Marine holding that a Jones Act sea- man alleging a claim for negligence under the Jones Act was limited to the recovery of pecuniary losses. As punitive damages are non-pecuniary,

Miles held that a Jones Act seaman could not recover punitive dam- ages in a negligence action brought against his employer.

After nineteen years of vessel own- ers being shielded from punitive dam- ages, the Supreme Court in Atlan- tic Sounding v. Townsend partially