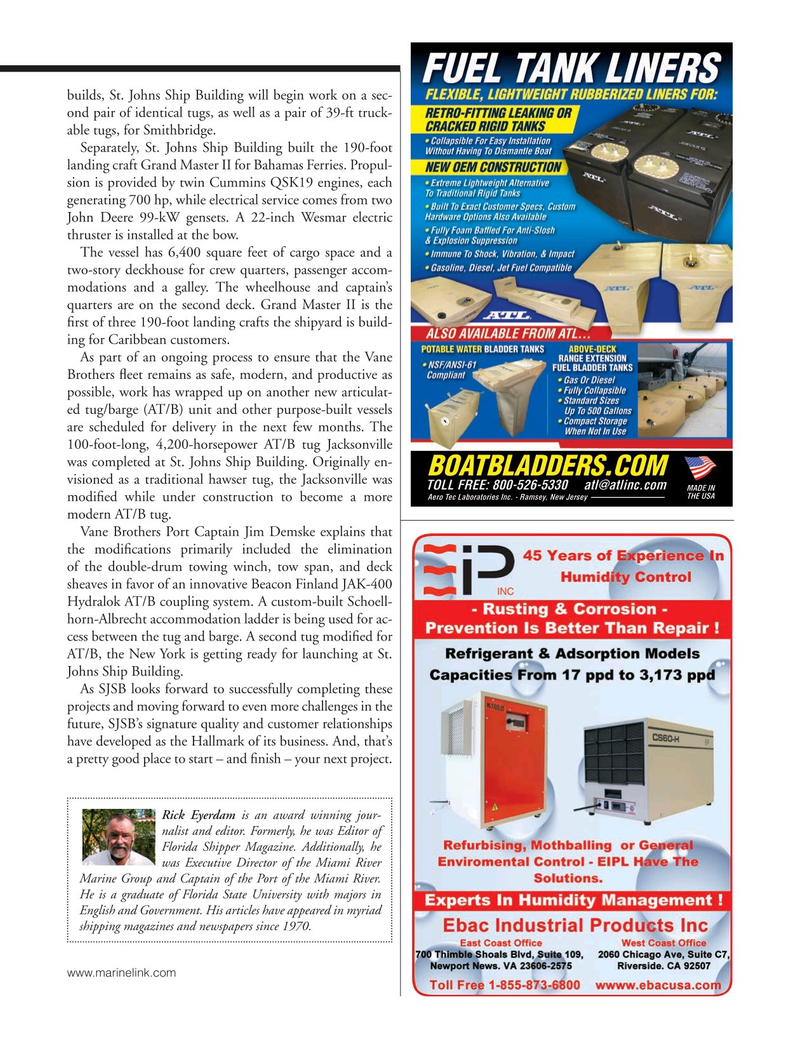 builds, St. Johns Ship Building will begin work on a sec- ond pair of identical tugs, as well as a pair of 39-ft truck- able tugs, for Smithbridge.

The vessel has 6,400 square feet of cargo space and a two-story deckhouse for crew quarters, passenger accom- modations and a galley. The wheelhouse and captain’s quarters are on the second deck. Grand Master II is the ? rst of three 190-foot landing crafts the shipyard is build- ing for Caribbean customers.

As part of an ongoing process to ensure that the Vane

Brothers ? eet remains as safe, modern, and productive as possible, work has wrapped up on another new articulat- ed tug/barge (AT/B) unit and other purpose-built vessels are scheduled for delivery in the next few months. The 100-foot-long, 4,200-horsepower AT/B tug Jacksonville was completed at St. Johns Ship Building. Originally en- visioned as a traditional hawser tug, the Jacksonville was modi? ed while under construction to become a more modern AT/B tug.

Hydralok AT/B coupling system. A custom-built Schoell- horn-Albrecht accommodation ladder is being used for ac- cess between the tug and barge. A second tug modi? ed for

AT/B, the New York is getting ready for launching at St.

As SJSB looks forward to successfully completing these projects and moving forward to even more challenges in the future, SJSB’s signature quality and customer relationships have developed as the Hallmark of its business. And, that’s a pretty good place to start – and ? nish – your next project.

Rick Eyerdam is an award winning jour- nalist and editor. Formerly, he was Editor of

Florida Shipper Magazine. Additionally, he was Executive Director of the Miami River

Marine Group and Captain of the Port of the Miami River.

He is a graduate of Florida State University with majors in

English and Government. His articles have appeared in myriad shipping magazines and newspapers since 1970.