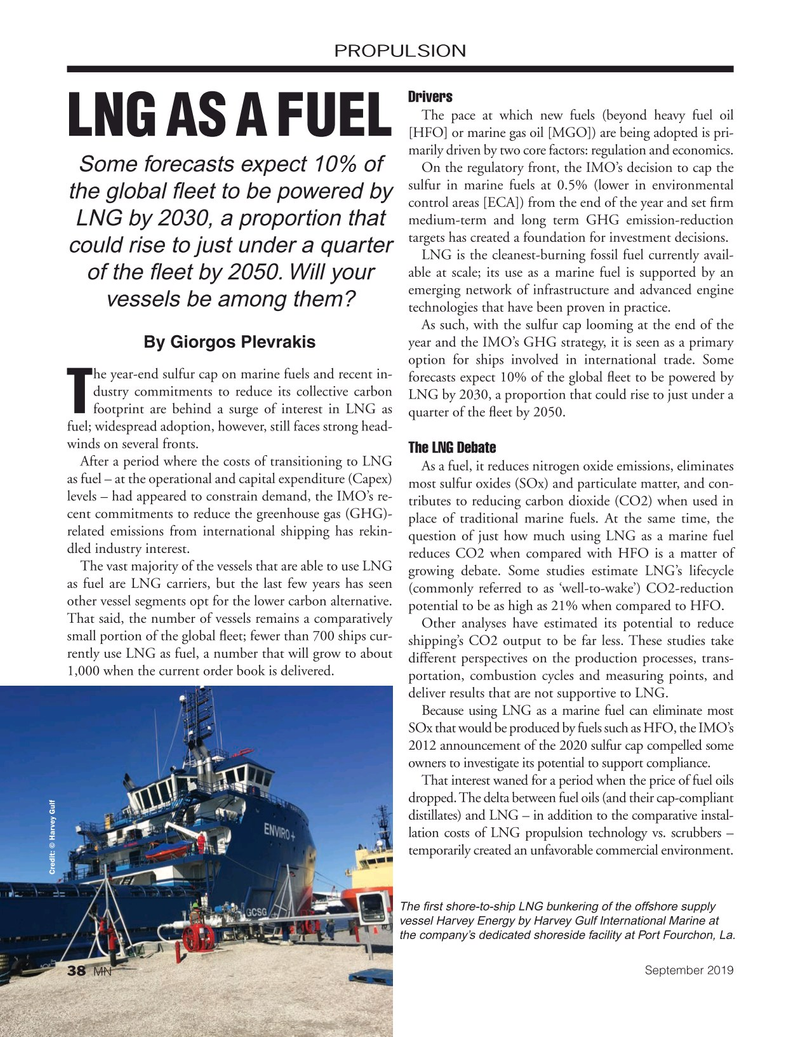 The pace at which new fuels (beyond heavy fuel oil

LNG AS A FUEL [HFO] or marine gas oil [MGO]) are being adopted is pri- marily driven by two core factors: regulation and economics.

Some forecasts expect 10% of

On the regulatory front, the IMO’s decision to cap the sulfur in marine fuels at 0.5% (lower in environmental the global ? eet to be powered by control areas [ECA]) from the end of the year and set ? rm medium-term and long term GHG emission-reduction

LNG by 2030, a proportion that targets has created a foundation for investment decisions.

could rise to just under a quarter

LNG is the cleanest-burning fossil fuel currently avail- able at scale; its use as a marine fuel is supported by an of the ? eet by 2050. Will your emerging network of infrastructure and advanced engine vessels be among them?

technologies that have been proven in practice.

As such, with the sulfur cap looming at the end of the year and the IMO’s GHG strategy, it is seen as a primary

By Giorgos Plevrakis option for ships involved in international trade. Some he year-end sulfur cap on marine fuels and recent in- forecasts expect 10% of the global ? eet to be powered by dustry commitments to reduce its collective carbon LNG by 2030, a proportion that could rise to just under a footprint are behind a surge of interest in LNG as quarter of the ? eet by 2050.

After a period where the costs of transitioning to LNG

As a fuel, it reduces nitrogen oxide emissions, eliminates as fuel – at the operational and capital expenditure (Capex) most sulfur oxides (SOx) and particulate matter, and con- levels – had appeared to constrain demand, the IMO’s re- tributes to reducing carbon dioxide (CO2) when used in cent commitments to reduce the greenhouse gas (GHG)- place of traditional marine fuels. At the same time, the related emissions from international shipping has rekin- question of just how much using LNG as a marine fuel dled industry interest.

reduces CO2 when compared with HFO is a matter of

The vast majority of the vessels that are able to use LNG growing debate. Some studies estimate LNG’s lifecycle as fuel are LNG carriers, but the last few years has seen (commonly referred to as ‘well-to-wake’) CO2-reduction other vessel segments opt for the lower carbon alternative. potential to be as high as 21% when compared to HFO.

That said, the number of vessels remains a comparatively

Other analyses have estimated its potential to reduce small portion of the global ? eet; fewer than 700 ships cur- shipping’s CO2 output to be far less. These studies take rently use LNG as fuel, a number that will grow to about different perspectives on the production processes, trans- 1,000 when the current order book is delivered.

portation, combustion cycles and measuring points, and deliver results that are not supportive to LNG.

Because using LNG as a marine fuel can eliminate most

SOx that would be produced by fuels such as HFO, the IMO’s 2012 announcement of the 2020 sulfur cap compelled some owners to investigate its potential to support compliance.

That interest waned for a period when the price of fuel oils dropped. The delta between fuel oils (and their cap-compliant distillates) and LNG – in addition to the comparative instal- lation costs of LNG propulsion technology vs. scrubbers – temporarily created an unfavorable commercial environment.