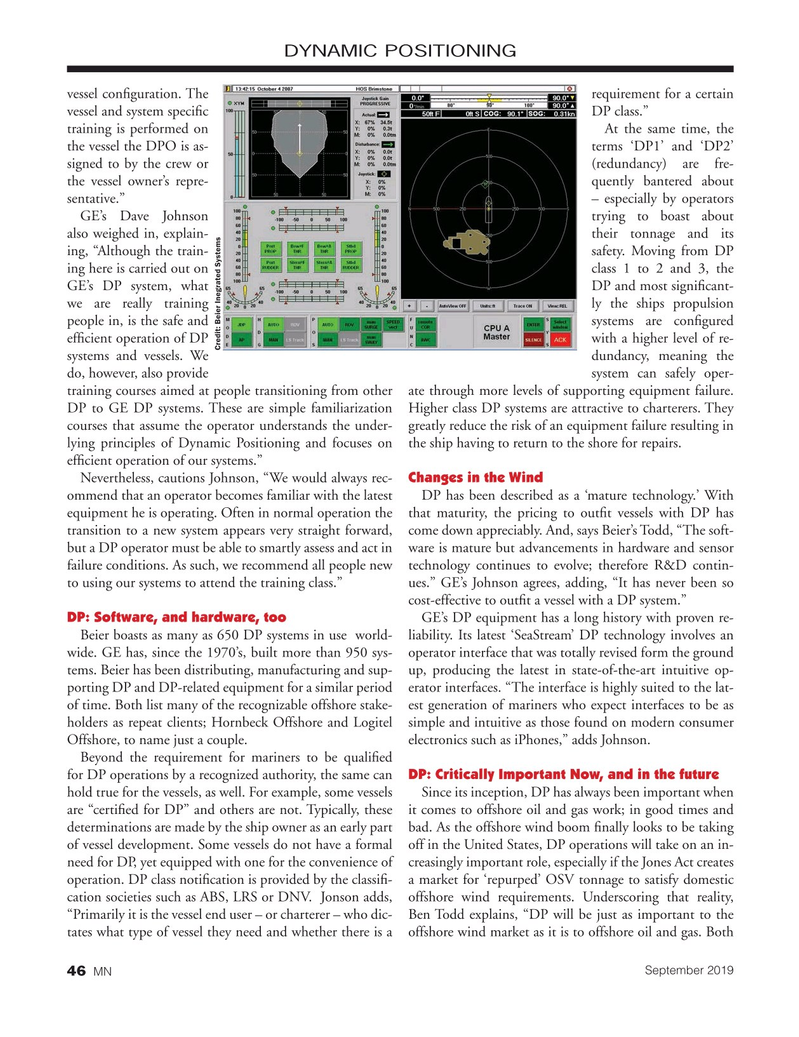 DYNAMIC POSITIONING vessel con? guration. The requirement for a certain vessel and system speci? c DP class.” training is performed on At the same time, the the vessel the DPO is as- terms ‘DP1’ and ‘DP2’ signed to by the crew or (redundancy) are fre- the vessel owner’s repre- quently bantered about sentative.” – especially by operators

GE’s Dave Johnson trying to boast about also weighed in, explain- their tonnage and its ing, “Although the train- safety. Moving from DP ing here is carried out on class 1 to 2 and 3, the

GE’s DP system, what DP and most signi? cant- we are really training ly the ships propulsion people in, is the safe and systems are con? gured ef? cient operation of DP with a higher level of re-

Credit: Beier Inegrated Systems systems and vessels. We dundancy, meaning the do, however, also provide system can safely oper- training courses aimed at people transitioning from other ate through more levels of supporting equipment failure.

DP to GE DP systems. These are simple familiarization Higher class DP systems are attractive to charterers. They courses that assume the operator understands the under- greatly reduce the risk of an equipment failure resulting in lying principles of Dynamic Positioning and focuses on the ship having to return to the shore for repairs. ef? cient operation of our systems.”

Nevertheless, cautions Johnson, “We would always rec- Changes in the Wind ommend that an operator becomes familiar with the latest DP has been described as a ‘mature technology.’ With equipment he is operating. Often in normal operation the that maturity, the pricing to out? t vessels with DP has transition to a new system appears very straight forward, come down appreciably. And, says Beier’s Todd, “The soft- but a DP operator must be able to smartly assess and act in ware is mature but advancements in hardware and sensor failure conditions. As such, we recommend all people new technology continues to evolve; therefore R&D contin- to using our systems to attend the training class.” ues.” GE’s Johnson agrees, adding, “It has never been so cost-effective to out? t a vessel with a DP system.”

DP: Software, and hardware, too GE’s DP equipment has a long history with proven re-

Beier boasts as many as 650 DP systems in use world- liability. Its latest ‘SeaStream’ DP technology involves an wide. GE has, since the 1970’s, built more than 950 sys- operator interface that was totally revised form the ground tems. Beier has been distributing, manufacturing and sup- up, producing the latest in state-of-the-art intuitive op- porting DP and DP-related equipment for a similar period erator interfaces. “The interface is highly suited to the lat- of time. Both list many of the recognizable offshore stake- est generation of mariners who expect interfaces to be as holders as repeat clients; Hornbeck Offshore and Logitel simple and intuitive as those found on modern consumer

Offshore, to name just a couple. electronics such as iPhones,” adds Johnson.

Beyond the requirement for mariners to be quali? ed for DP operations by a recognized authority, the same can DP: Critically Important Now, and in the future hold true for the vessels, as well. For example, some vessels Since its inception, DP has always been important when are “certi? ed for DP” and others are not. Typically, these it comes to offshore oil and gas work; in good times and determinations are made by the ship owner as an early part bad. As the offshore wind boom ? nally looks to be taking of vessel development. Some vessels do not have a formal off in the United States, DP operations will take on an in- need for DP, yet equipped with one for the convenience of creasingly important role, especially if the Jones Act creates operation. DP class noti? cation is provided by the classi? - a market for ‘repurped’ OSV tonnage to satisfy domestic cation societies such as ABS, LRS or DNV. Jonson adds, offshore wind requirements. Underscoring that reality, “Primarily it is the vessel end user – or charterer – who dic- Ben Todd explains, “DP will be just as important to the tates what type of vessel they need and whether there is a offshore wind market as it is to offshore oil and gas. Both