Bridge Heights Are Not Guesswork: Accuracy Is Imperative

“Your true pilot cares nothing about anything on earth but the river, and the pride in his occupation surpasses the pride of kings.” -Mark Twain, Life on the Mississippi (1883).

That statement made by the great chronicler and river pilot over 137 years ago is arguably as true today as it was then. But what has changed dramatically in the almost century and a half since then is the variety and complexity of the daily challenges that river pilots confront on our increasingly busy inland waterways. The sophistication of locks, dams and bridges, the unpredictable fluctuations in water levels and the consequences to those who fail to factor in all of the above when planning their commercial river trips can be costly career killers.

Even in Twain’s day, one key concern of any experienced river pilot was the depth, width and height of not only his vessel, but, as importantly, whatever that vessel was pushing or pulling. While those measurements were a constant for his vessel, the variances of the sizes of that day’s job were unpredictable. And, while water levels change and navigable channels widen and narrow, bridge heights don’t. It’s up to the pilot to make adjustments to his calculations and safety margins according to that day’s river conditions. If that isn’t done, the potential consequence of a bridge allision could be the beginning of a very long and difficult battle to defend his pilot’s license, career on the river and professional reputation.

The case highlighted here is not at all unusual in the set of facts and, sadly, in its outcome as well.

A lapse in judgement
In late fall, our pilot was serving onboard a towboat on a Midwest river and towing astern a 50- by 50-foot flexifloat spud barge. On board the barge was a deckhand and two observers. The workboat pilot had towed several flexifloat barges previously, but it was his first time towing this specific flexifloat spud barge. The trouble truly began when he eye-balled the spud height above the water level to be 35 feet. Unfortunately, he did not directly measure the spud height, inquire about the exact height or go onboard the barge to check the height himself. What made matters worse, was the fact that these particular spuds could be positioned either all the way up or all the way down. Ominously, the spuds were in the full up position.

The captain commenced what was planned to be a four-mile transit route requiring passage under a vertical lift railroad bridge. The bridge, which had a vertical clearance of 35 feet when down and 135 feet when raised, was manned 24/7 and the operator could raise it partially or completely depending on the circumstances and communications received from approaching vessels via marine radio.

Seeing that the bridge was in the down position as he approached, the pilot judged that “he could make it under the bridge without problems.” It was daylight, weather conditions were favorable with an ebb current and 4 nautical miles visibility.

The towboat passed under the railroad bridge, but as the flexifloat spud barge being towed astern was proceeding underneath the bridge, the spuds on the barge came in contact with the lower railroad steel beam of the bridge, resulting in damages to the spuds and, possibly, the bridge.

Following the allision and as the shaken pilot was assessing damage to the barge and attending to other potential onboard safety issues like flooding and pollution, the railroad bridge operator immediately reported the incident to the local Coast Guard station prompting the on-duty USCG safety officer to contact the pilot for confirmation that his tow had indeed struck the bridge. The pilot confirmed the allision with the bridge and reported that the lower two bolts of the forward spud well bent over and the aft spud well’s upper bolts broke, causing the aft spud and well to bend backwards. He further reported no damage to his vessel or, to the best of his knowledge the railroad bridge.

An open and shut case
After his conversation with the Coast Guard officer, the pilot reported the incident to his license insurer and was immediately assigned a local maritime attorney who assisted him in the completion and submission of the Marine Casualty Report (2692) and subsequently accompanied the river pilot to his in-person Coast Guard interview.

The meeting was brief. The pilot was charged with negligence for both failing to check and verifying the height/draft of the barge’s spuds, and failing to request the operator to raise the bridge to facilitate safe passage. He was offered a settlement agreement of an outright three-month license suspension with an additional nine-month probationary period following the completion of his ‘beach’ time.

After debating the merits of contesting the terms of the settlement offer, both he and his attorney agreed that, given the absence of mitigating circumstances, the most prudent, yet painful, decision was to accept the suspension with probation offer.

Because he had opted for income protection when purchasing his license insurance policy, the pilot received his insured wages for the duration of his suspension, but no amount of money could compensate the hit to his professional reputation caused by two egregious lapses in judgement: not verifying the spud’s height and/or not requesting the bridge to be raised.

Because this column opened with an upbeat quote from Mark Twain, it’s only fitting that we end it by going back a few millennia to ancient Greece and the sobering, yet cautionary, words of the tragedian Sophocles who wrote, “Men of ill judgement oft ignore the good that lies within their hands, till they have lost it.” 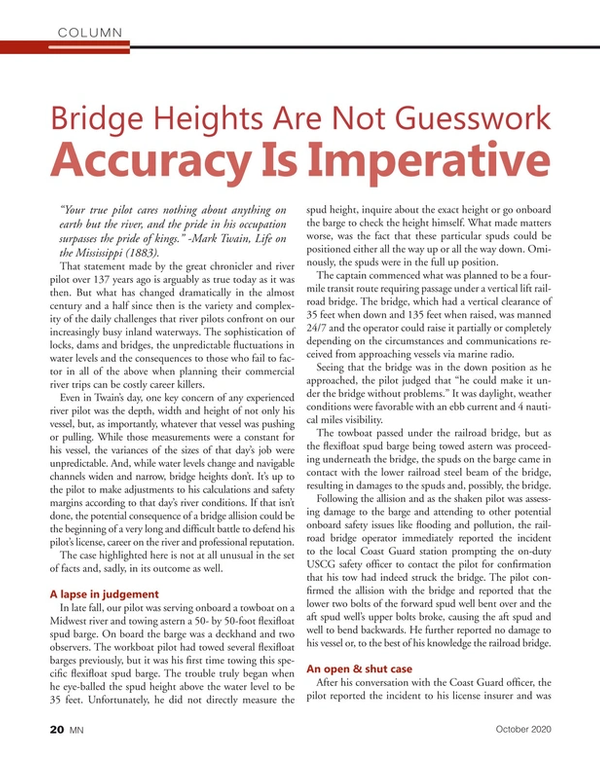 Read Bridge Heights Are Not Guesswork: Accuracy Is Imperative in Pdf, Flash or Html5 edition of October 2020 Marine News