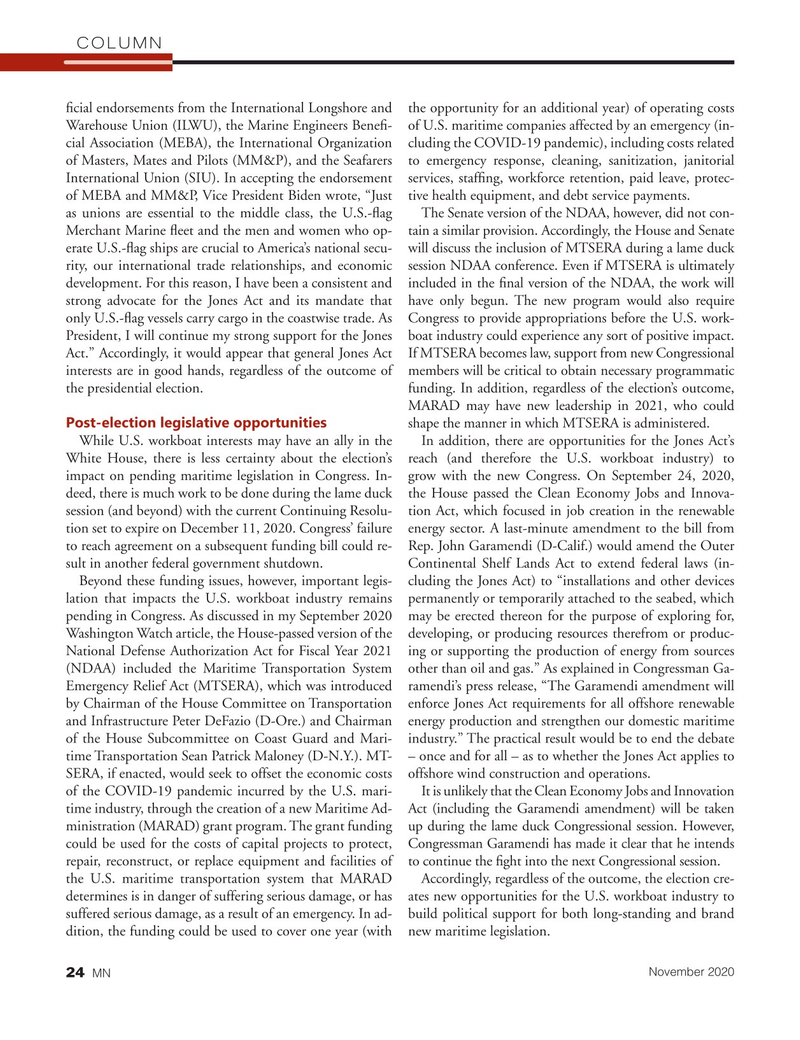 COLUMN ? cial endorsements from the International Longshore and the opportunity for an additional year) of operating costs

as unions are essential to the middle class, the U.S.-? ag The Senate version of the NDAA, however, did not con-

Merchant Marine ? eet and the men and women who op- tain a similar provision. Accordingly, the House and Senate erate U.S.-? ag ships are crucial to America’s national secu- will discuss the inclusion of MTSERA during a lame duck rity, our international trade relationships, and economic session NDAA conference. Even if MTSERA is ultimately development. For this reason, I have been a consistent and included in the ? nal version of the NDAA, the work will strong advocate for the Jones Act and its mandate that have only begun. The new program would also require only U.S.-? ag vessels carry cargo in the coastwise trade. As Congress to provide appropriations before the U.S. work-

President, I will continue my strong support for the Jones boat industry could experience any sort of positive impact.

Act.” Accordingly, it would appear that general Jones Act If MTSERA becomes law, support from new Congressional interests are in good hands, regardless of the outcome of members will be critical to obtain necessary programmatic the presidential election. funding. In addition, regardless of the election’s outcome,

MARAD may have new leadership in 2021, who could

Post-election legislative opportunities shape the manner in which MTSERA is administered.

While U.S. workboat interests may have an ally in the In addition, there are opportunities for the Jones Act’s

White House, there is less certainty about the election’s reach (and therefore the U.S. workboat industry) to impact on pending maritime legislation in Congress. In- grow with the new Congress. On September 24, 2020, deed, there is much work to be done during the lame duck the House passed the Clean Economy Jobs and Innova- session (and beyond) with the current Continuing Resolu- tion Act, which focused in job creation in the renewable tion set to expire on December 11, 2020. Congress’ failure energy sector. A last-minute amendment to the bill from to reach agreement on a subsequent funding bill could re- Rep. John Garamendi (D-Calif.) would amend the Outer sult in another federal government shutdown. Continental Shelf Lands Act to extend federal laws (in-

Beyond these funding issues, however, important legis- cluding the Jones Act) to “installations and other devices lation that impacts the U.S. workboat industry remains permanently or temporarily attached to the seabed, which pending in Congress. As discussed in my September 2020 may be erected thereon for the purpose of exploring for,

Washington Watch article, the House-passed version of the developing, or producing resources therefrom or produc-

National Defense Authorization Act for Fiscal Year 2021 ing or supporting the production of energy from sources (NDAA) included the Maritime Transportation System other than oil and gas.” As explained in Congressman Ga-

Emergency Relief Act (MTSERA), which was introduced ramendi’s press release, “The Garamendi amendment will by Chairman of the House Committee on Transportation enforce Jones Act requirements for all offshore renewable and Infrastructure Peter DeFazio (D-Ore.) and Chairman energy production and strengthen our domestic maritime of the House Subcommittee on Coast Guard and Mari- industry.” The practical result would be to end the debate time Transportation Sean Patrick Maloney (D-N.Y.). MT- – once and for all – as to whether the Jones Act applies to

SERA, if enacted, would seek to offset the economic costs offshore wind construction and operations. of the COVID-19 pandemic incurred by the U.S. mari- It is unlikely that the Clean Economy Jobs and Innovation time industry, through the creation of a new Maritime Ad- Act (including the Garamendi amendment) will be taken ministration (MARAD) grant program. The grant funding up during the lame duck Congressional session. However, could be used for the costs of capital projects to protect, Congressman Garamendi has made it clear that he intends repair, reconstruct, or replace equipment and facilities of to continue the ? ght into the next Congressional session. the U.S. maritime transportation system that MARAD Accordingly, regardless of the outcome, the election cre- determines is in danger of suffering serious damage, or has ates new opportunities for the U.S. workboat industry to suffered serious damage, as a result of an emergency. In ad- build political support for both long-standing and brand dition, the funding could be used to cover one year (with new maritime legislation.