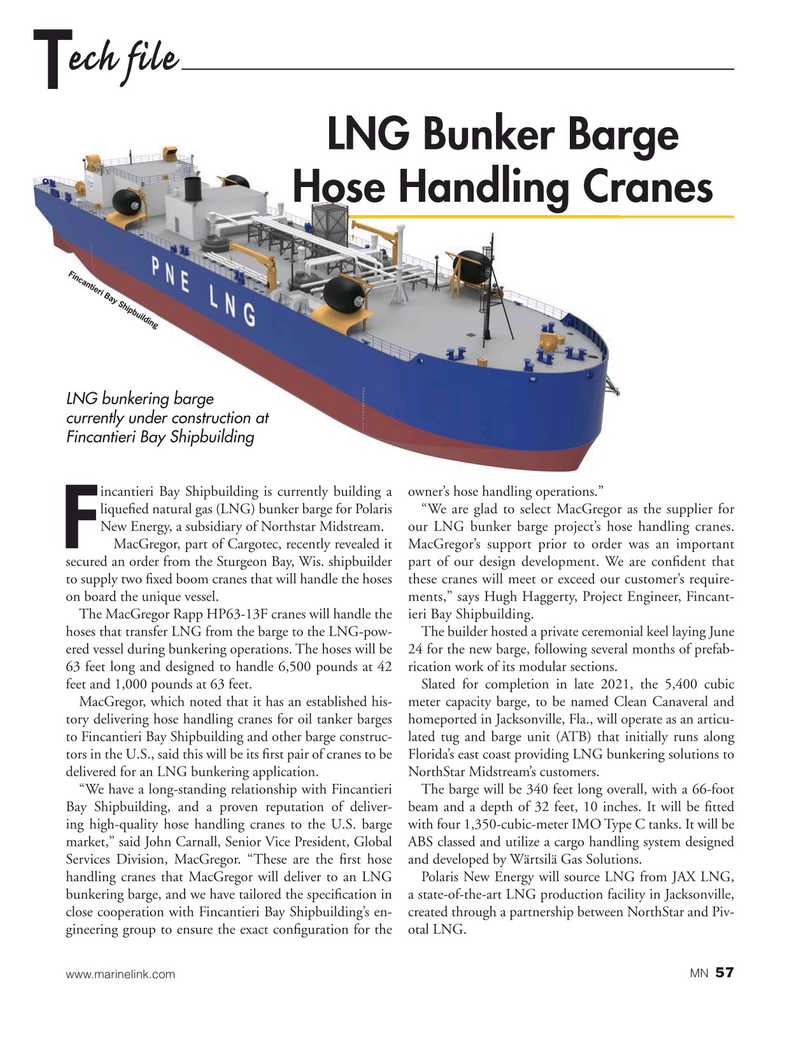 MacGregor, part of Cargotec, recently revealed it MacGregor’s support prior to order was an important

F secured an order from the Sturgeon Bay, Wis. shipbuilder part of our design development. We are con? dent that to supply two ? xed boom cranes that will handle the hoses these cranes will meet or exceed our customer’s require- on board the unique vessel. ments,” says Hugh Haggerty, Project Engineer, Fincant-

hoses that transfer LNG from the barge to the LNG-pow- The builder hosted a private ceremonial keel laying June ered vessel during bunkering operations. The hoses will be 24 for the new barge, following several months of prefab- 63 feet long and designed to handle 6,500 pounds at 42 rication work of its modular sections.

MacGregor, which noted that it has an established his- meter capacity barge, to be named Clean Canaveral and tory delivering hose handling cranes for oil tanker barges homeported in Jacksonville, Fla., will operate as an articu- to Fincantieri Bay Shipbuilding and other barge construc- lated tug and barge unit (ATB) that initially runs along tors in the U.S., said this will be its ? rst pair of cranes to be Florida’s east coast providing LNG bunkering solutions to delivered for an LNG bunkering application. NorthStar Midstream’s customers.

“We have a long-standing relationship with Fincantieri The barge will be 340 feet long overall, with a 66-foot

Bay Shipbuilding, and a proven reputation of deliver- beam and a depth of 32 feet, 10 inches. It will be ? tted ing high-quality hose handling cranes to the U.S. barge with four 1,350-cubic-meter IMO Type C tanks. It will be market,” said John Carnall, Senior Vice President, Global ABS classed and utilize a cargo handling system designed

Services Division, MacGregor. “These are the ? rst hose and developed by Wärtsilä Gas Solutions.

handling cranes that MacGregor will deliver to an LNG Polaris New Energy will source LNG from JAX LNG, bunkering barge, and we have tailored the speci? cation in a state-of-the-art LNG production facility in Jacksonville, close cooperation with Fincantieri Bay Shipbuilding’s en- created through a partnership between NorthStar and Piv- gineering group to ensure the exact con? guration for the otal LNG.