Ocean Aero All About Ocean Observation

Ocean Aero is a small, new San Diego-based unmanned maritime systems company that has big plans to provide both a product and service to solve a very difficult problem – ocean observation.
“Ocean observation is being able to monitor or sense the environment above, on-top and below the surface of the water. Ocean Observation has been, until recently, largely done by manned vessels which have significant endurance and finical limitations. These limitations transfer immediately to the variety of people who are trying to observe the oceans.  We break those people into three groups: scientists; commercial operators and government.”
Patten describes the scientists as being all types who have a need to learn more or understand the ocean environment.  The commercial operators includes anyone who is operates a part of their businesses at sea, such as fisheries, telecom and oil and gas.  Government is a broad area that includes everyone from NOAA (National Oceanographic and Atmospheric Administration), the Environmental Protection Agency (EPA), all the way to the military and intelligence community and quite a few organizations in between.
We are developing a game changing unmanned maritime robot that will be able to operate on and under the surface of the ocean.  Our “Submaran” vessel gives our customers the ability sense and observe the oceans both on the surface and beneath the surface—for months at time.”
On the surface, the Submaran uses wind propulsion with auxiliary electric motors, giving it a speed of up to 6 knots.  Underwater it becomes a buoyancy changing glider with a jet drive. Our small maritime robot will be able to autonomously operate at sea for six to nine months initially, both on the surface and down to 200m.  It can easily be launched by two people from a variety of locations, such as a pier, ship and even an aircraft.  What we are doing is revolutionary,” says Patten.  “It has never been done before.”
Patten says the Submaran’s unique capabilities will allow operators to get into and remain in areas of the oceans that would be extremely difficult —if not impossible— and cost prohibitive for manned vessels.  “In addition there is an aspect of what are doing that we will discover more capabilities for customers that we are unaware yet.”
“Right now we are a developmental company.  We will be transitioning Submaran in about 12 months. We will be offering a Submaran product for sale as well as the associated support services. In addition we will be offering a “system as a service” for those organizations that do not want the capital investment but need to the data that we can gather with the vessel,” he says.

The Teledyne Connection
Teledyne Technologies recently invested in and entered into a strategic partnership with Ocean Aero.
“The investment in Ocean Aero further broadens Teledyne’s portfolio of marine technologies and autonomous systems,” said Robert Mehrabian, chairman, president and chief executive officer of Teledyne. “Ocean Aero’s planned unmanned underwater/surface vehicles, powered by wind and solar, complement Teledyne’s battery-powered Gavia AUVs and market-leading autonomous gliding vehicles using buoyancy-based propulsion.”
“With this investment and partnership comes quite a few tangible advantages but it also comes with great intangible benefits,” Patten says.  “The fact that a global leader, like Teledyne has invested in Ocean Aero, is large vote of confidence for what we are doing and what we are capable of. Teledyne has been great partner that is helping us take our concept and making it a reality.”
Being in San Diego and part of the growing ocean technology sector has distinct advantages, says Patten.  “With what we do we need access to the oceans which obviously San Diego allows you to do.  But more importantly San Diego gives us access to other like-minded complementary companies whom we can partner with.”
“There is also a significant market for what we do,” he says.   “San Diego has a large and diverse Navy presence in addition to the other government entities that have a need or mission on the seas. Moreover, there are other market participants like Scripps Institute of Oceanography, UCSD, USD and SDSU – all of whom have needs in the ocean.”
As an added bonus, Patten says San Diego is also a great place to live.
“We definitely feel we are part of the Blue Tech and Blue Economy here in San Diego,” Patten says.  “What we do is all about the oceans and helping understand to them better.” 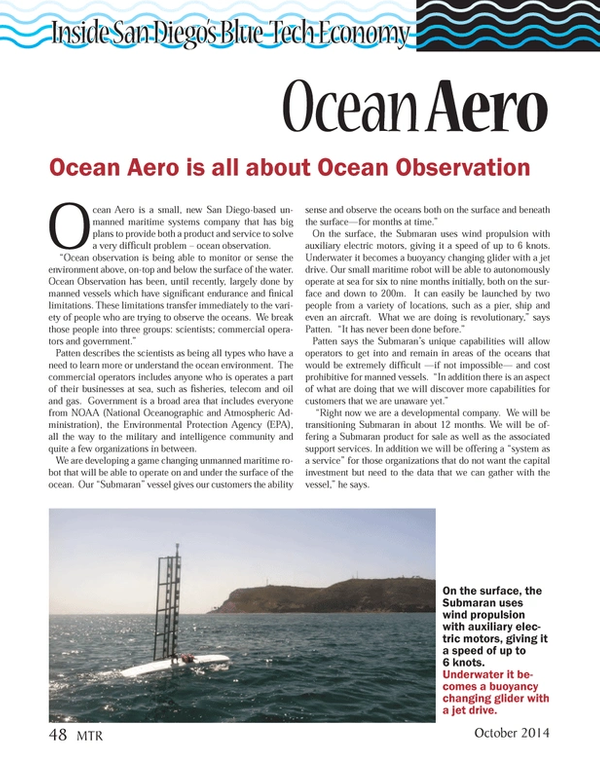