The Road to Standardization

Standardization is a buzzword in the subsea sector, but for many it remains a term shrouded by uncertainty. What exactly does the subsea market stand to gain from standardization, and how can it be applied to achieve optimum benefit? But despite the questions, there are several generally accepted notions: standardization can reduce overall costs and project timeframes across the industry; standardization requires industry-wide collaboration and it is something that must evolve over time. So, where to begin? A good place to start is with documentation.

The New Standards
DNV GL has joined forces with partners from the subsea space in hopes of creating industry standards for subsea documentation, an initiative that it says has been welcomed by the industry with wide participation from operators, EPC(I) contractors and suppliers representing all parts of the supply chain. The Joint Industry Practice (JIP) sets out to establish a DNV GL Recommended Practice (RP) aimed at initiating industry guidelines and recommendations required to document typical subsea products and systems, with an associated minimum set of documentation.
“The aim of this broad industry collaboration initiated by DNV GL and the Norwegian Oil and Gas Association is to develop a standardized set of subsea-system documents for designing, approving, manufacturing, verifying, operating and maintaining equipment,” explained the JIP project manager Jarl S. Magnusson of DNV GL Oil & Gas Advisory.
DNV GL said the initiative’s origins trace back to a project 2010 for which standardized documentation arose as a suggestion from one of several projects developed by the Norwegian Oil and Gas Association to spur standardization within the subsea sector. Now, the drive is ultimately toward simplified, standardized documentation practices for players across the sector, from equipment suppliers to oil majors.

Why address documentation?
As worldwide subsea projects become increasingly complex, so too has the documentation needed to ensure regulatory and operational compliance, meaning preparation and maintenance of relevant documentation has become even more time consuming, complex and costly to deliver. On top of that, requirements differ significantly between the major operators.
DNV GL explained that typical subsea project can involve more than 10,000 documents, with up to 80,000 in a complex project over a lifecycle of 30 years. To develop, maintain and verify the quality, security, accuracy and availability of documentation, operators, contractors and suppliers will often spend millions on document management, technical review and information management systems. Consequently, the lack of standardization can lead to misunderstandings, a reduction in quality and difficulty in handling approvals, distribution and availability. This further leads to increasing project lead-times and costs for both customers and suppliers.
“There are thousands of documents produced with any subsea project. This includes the design documentation, fabrication and assembly procedures, test procedure, installation procedures, material certificates, operating procedures and more,” said Christian Markussen, subsea business development director at DNV GL Oil & Gas. “Each operator has its specific requirements to these documents in terms of naming convention, logos, document structure, numbering systems, etc. These requirements are not only passed down to the contractor, but also their sub-suppliers. Compiling all this documentation is very time consuming when each operator has its specific requirements.”
Frankly, unnecessary complications lead to unnecessary costs; and for an industry that has seen costs skyrocket year after year, any opportunity to reduce expenses while improving efficiency must be welcome.
“The industry is realizing that something has to be done to reduce cost, and standardization is a key to achieving industrialization in the subsea industry,” Markussen said. “So far each project has delivered essentially project specific equipment which requires a lot of engineering and prevents optimization of the design, fabrication and purchasing processes. The standardized documentation will allow a more streamlined work process which will free up engineering resources that can be used more productively.”

Who benefits?
DNV GL believes subsea projects worldwide would benefit from an industry standard for subsea documentation. As well as improving documentation quality and assisting with on-time delivery, a standard should save suppliers, contractors and operators valuable engineering hours by reducing the need to define and review technical documents.
Markussen said operators are in position to gain most from standardized documentation as they will receive systems at a lower cost with typically reduced delivery times, while suppliers benefit in that they can optimize work processes and reduce wasteful work, also freeing up engineering capacity for productivity.
Jan Ragnvald Torsvik, Lead Engineer of Life Cycle Information at Statoil and co-chairman of the JIP, said, “Statoil is participating in this JIP because the RP has the potential to deliver a significant degree of standardization, efficiency and increased quality. This will be implemented in Statoil through updates of our technical requirements.”
And many other companies are on board as well, demonstrating the wide range of support across the sector. JIP partners include: Aker Subsea AS, Centrica Energi, Det Norske Oljeselskap ASA, FMC TI, GDF SUEZ E&P Norge AS, Kongsberg Oil & Gas Technologies AS, Lundin Norway AS, Norwegian Oil and Gas Association, OneSubsea, RWE Dea Norge AS, Statoil Petroleum AS, Subsea7 and Subsea Valley.
Aker Solutions’ Document Manager Julia M. Henriksen, said, “This JIP addresses the contractor’s need for clear understanding of the key drivers of engineering hours when planning, producing and reviewing documentation. Standardization is critical in order to improve engineering ability to reach on-time delivery targets and ensure the controlled planning and execution of documentation delivery in projects while minimizing the amount of hours spent. Aker Subsea sees great potential in applying standard practice to the scope of subsea project documentation and plans to use the JIP recommendations in its own specifications.”
Torsvik added, “All actors in the chain of delivery will gain on spending less time interpreting, understanding and reviewing documents and document requirements when we have a unified way to name equipment, name documents and establish requirement matrix for technical information.”
Torsvik continued, “This will not necessarily reduce number of documents, but it will save a lot of hours on producing documents (because they are standard), understanding requirements (because they are standard) and reviewing documents (because they are as expected).”
Although the joint industry project (JIP) is still in its early stages, industry players have expressed that the documentation effort may be a big step toward reducing costs and timeframes, and driving standardization throughout the entire subsea arena. “The standardization of subsea documentation will be a crucial first step in reducing costs in the supply chain,” said Arild Selvig, Director Sales and Marketing, FMC Technologies Subsea Eastern Region. “Standardization helps us mitigate increasing cost concerns in the industry. There are numerous benefits to standardization, including cost control, quality and timeliness.”
Torger Rød, Statoil’s Senior Vice President, Head of Subsea, Pipeline and Cessation Projects, said DNV GL’s documentation JIP, along with another on JIP forgings, would greatly improve delivery times, reduce cost and improve quality. “For subsea solutions, [standardization] means defining a limited number of configurable standards that will cover the majority of types of subsea developments,” Rød said.
“Standardization is much more than just delivering a standard product. It is about material selection, interfaces, functions, specification, work processes, installation and more,” Markussen said. “Once the effect of standardization is realized, then it will be self-reinforcing.” 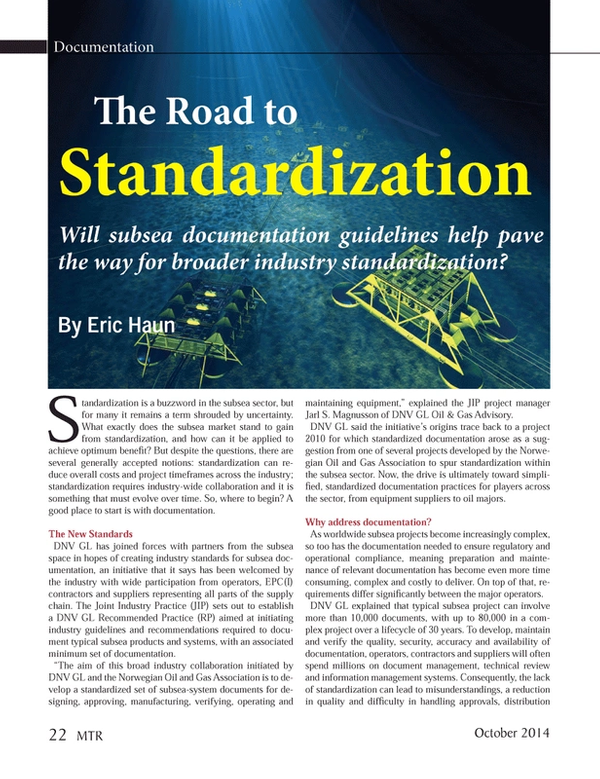 Read The Road to Standardization in Pdf, Flash or Html5 edition of October 2014 Marine Technology