C-CORE
C-CORE, (Center for Cold Ocean Resource Engineering), has developed tools to forecast iceberg movement and prepare mitigation strategies. It’s a simulation-based toolbox, taking into consideration factors like iceberg location and size, number of icebergs, what tow vessels are available in the field, and potential impact on any other facilities in the area. “You can’t deflect until you detect,” said Dr. Charles Randell, C-CORE President and CEO. “With a satellite, you can look at areas well north of the area you’re interested in. You can detect and track an iceberg as it approaches your platform and implement ice management protocols.”
One such innovation, an iceberg net, is used to tow away icebergs that might be on a collision course with an offshore facility. It was developed over a decade ago in collaboration with a local company, Extreme East Rigging – a supplier of ocean rigging and lifting products. Now in common industry use, the iceberg net stands as one of C-CORE’s many success stories. C-CORE is also home to one of the largest centrifuges in the world, able to simulate Arctic phenomena. Models ranging from scales of 1:2 to 1:200 are precisely constructed and placed under centrifuge tests that can simulate years of freezing and thawing, and its effects on ocean equipment such as platforms, vessels, and pipelines.  Having kept its eyes on ice for decades, C-CORE – located on the campus of Memorial University in St. John’s, NL – now also encompasses two centers of excellence: LOOKNorth and CARD. LOOKNorth (Leading Operational Observations and Knowledge for the North) is Canada’s only Center of Excellence for commercialization and research dedicated to remote sensing innovation in support of northern resource development. The center uses remote sensing technology and extremely capable satellite radar technology to monitor northern environments and infrastructure to see where ice is moving and predict where it will move to.  CARD (Center for Arctic Resource Development) is also unique in Canada as it is the only independent, industry-guided research centre focused on addressing challenges that impede safe and sustainable development of Arctic hydrocarbons.

PAL
Flying maritime surveillance aircraft for over 35 years for government, military, and industry, Provincial Aerospace (PAL) also has a long history of tracking ice movements, having provided such services to operators off Canada’s east coast for over twenty years. From its beginnings in visual aerial surveillance, radar technology is now the company’s specialty. It has evolved to be what COO Jake Trainor describes as, “a data-driven company that happens to know something about aircraft.”  PAL provides oil and gas operators with visibility regarding the whereabouts and anticipated movements of sea ice and icebergs that may be a threat to their assets. In addition, PAL creates tailored solutions for clients in sectors as diverse as defense, maritime domain and fisheries enforcement, and search and rescue, putting together the best combination of sensor systems to achieve the desired goal, matching that information with the aircraft that is best suited to the task.

Canatec
Canatec is a relatively new addition to the St. John’s ocean technology cluster, but has deep history and experience in harsh environment surveillance and management. Headquartered in Calgary, Alberta, Canatec has spent 22  years dealing with the challenges of Arctic ice. The St. John’s-based Canatec team – a R&D arm of the core company – has taken on a very specific project in the area of marine search and rescue (SAR) operations. The team is aiming to repurpose technology developed in their extensive ice drift tracking pursuits to instead track individuals.
“We’re taking the ‘search’ out of ‘search and rescue’,” said Dr. Scott Tiffin, Canatec Partner and St. John’s Project Manager. “We know at all times where these people are and, with biometrics, we know what state they’re in.” The project aims to keep workers and SAR personnel safe, and to broaden the operational window for helicopter transportation in offshore oil and gas operations. Another key provider of research and development, based within the Memorial University campus, is a division of Canada’s National Research Council (NRC).  The Ocean, Coastal and River Engineering (OCRE) division is actively engaged in taking ice samples from the Arctic and bringing them back for replication and analysis in its labs. The division has invested in world-class people and facilities, such as the world’s longest ice tank, a tow tank, and an offshore engineering basin, along with complex numerical and model testing systems. A major focus for NRC-OCRE is engineering for Arctic applications.
“The goal in scale modeling – physical or numerical – is to replicate the environment in the most extreme conditions; ice, wave, wind, currents, and then to combine all of this data,” said Jim Millan, Director of Research and Development. “Our tools and expertise in engineering design and performance evaluation enable NRC-OCRE to mitigate risk – be it environmental, financial, or health and safety – in offshore projects.”
NRC-OCRE employs roughly 65 technical staff to provide what General Manager Terry Lindstrom describes as a full toolbox of numerical modeling, physical modeling, and full-scale testing.
“Having that full toolbox allows us to complete the full-scale project and then go back to the early, less expensive approach to validate the data we now have in the field,” said Lindstrom. “There are very few organizations in the world that provide support at all three levels.” 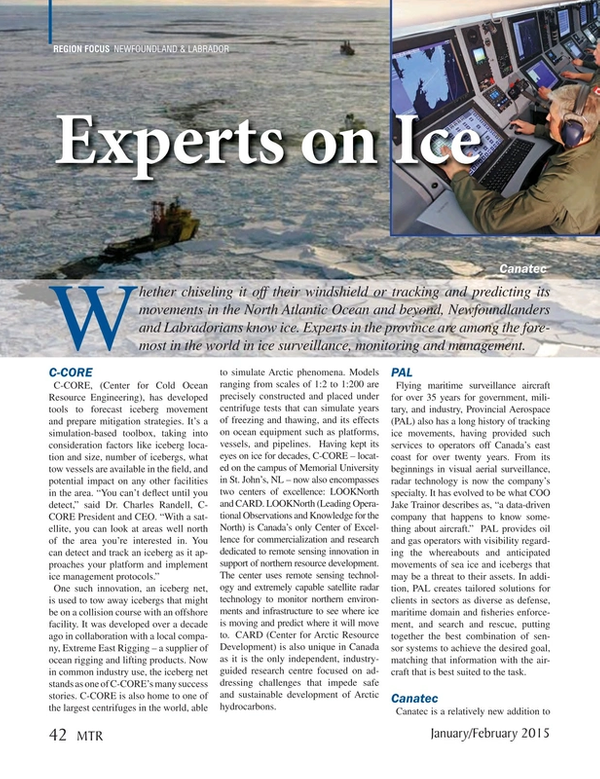