When Marine Technology Reporter visited the Oceans 2014 exhibition in St. Johns in September we learned that Michael J. Stewart, a ubiquitous figure in the subsea sector for more than four decades, will retire from McArtney effective this month. Stewart has been with MacArtney for more than 20 years in a variety of forms, made permanent when MacArtney bought his company MJ Stewart Associates.
“When I first started with the company (MacArtney) we were about $6-7 million (per year) and now we are more than $100 million,” said Stewart. “It has been a great run, they are a great company; they do a really good job of understanding the business that they are in. MacArtney sees what the customer needs, and then they aim to become the preferred solution. They spend money to make money: they make the investments that they need to make and I think that’s a key why we have grown so fast and stayed profitable.”
Stewart began his career in the subsea world after graduating  from the United States Merchant Marine Academy (USMMA) in 1965. After sailing with the U.S. merchant marine during the Vietnam War, Stewart was lured ashore courtesy of a request from his wife, and a job with a company that was making marine radio facsimile for weather charts, which led to involvement with the company’s sonar products.
Stewart’s career has been broad and interesting, including work and personal relationships with some industry luminaries including Bob Ballard, Marty Klein and Charlie Black.
In fact, for some time he ran a company with Bob Ballard, the company Marquest. “I was supplying  equipment, and Ballard needed someone to run his company so we made a perfect pair. I knew how to run operations, and he had the vision and charisma … he was the leader.” Marquest was built to more than 40 people, but as Stewart succinctly summarized: “the Cold War ended,” and so too did Marquest. Following Marquest Stewart opened MJ Stewart Associates, which he ran until MacArtney bought the organization. In reflecting on the breadth of his career, Stewart reckons that while technology has changed mightily in capability and price, one thing remains the same. “The technology has changed. We sold GPS systems for a million dollars that gave you 20m accuracy back in the early 80s; now I have a chart on my iPhone that’s better than that,” said Stewart. “But the people are the same. Bottom line, you have to have people that can go to sea, and make this stuff work at sea, and that’s a whole different ballgame.”
As Stewart sails toward retirement and ponders working his golf game (not that he needs it, with a handicap  of 8) and future courses of cruise on his 33-ft. Grady White, he is proud of the legacy he has left and is particularly proud that his daughter Jennifer remains at the helm of MacArtney Northeast Operations.
“What I’m most proud of is building a business and seeing it grow from one customer in North America to a multi-million dollar business, and being respected by the industry for the product we sell,” said Stewart. Not quite yet in retirement mode, he emphasized that “we try not to sell a product, we sell a solution.” 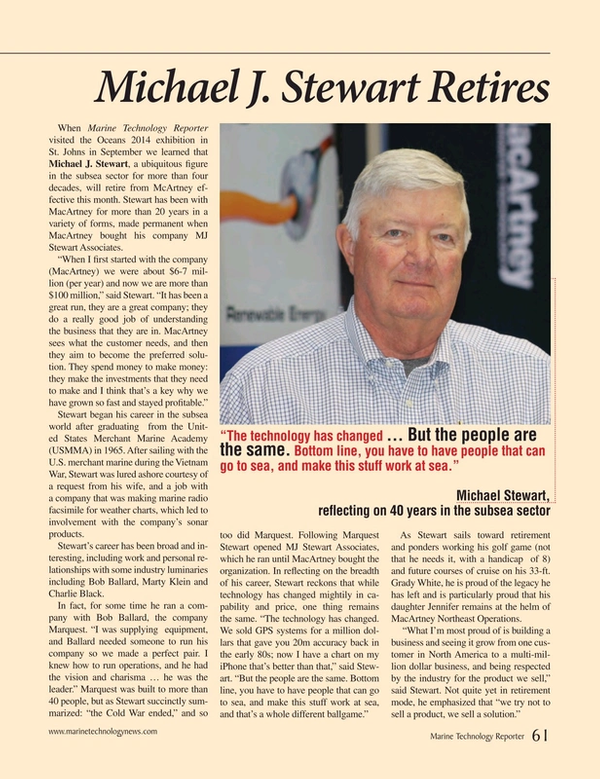