Modern Tech for a Cold Case

In January 1971, a phone rang in the living room of a family in Atlanta, Ga. Lem Nikita, then 19, answered the call which confirmed that his father George Nikita’s plane had crashed somewhere over Lake Champlain during a blizzard shortly after takeoff. The elder Nikita was the pilot of a 10-seat Jet Commander owned by Cousins Properties, Inc. It was enroute from Burlington, Vt., to Providence, R.I., to pick up one of the pilots wives before continuing on to Atlanta. Five men were on board. Shortly after take off from Burlington airport, the Aero Commander disappeared from radar. Due to the severity of the weather all rescue attempts were temporarily put on hold.  Despite several items washing ashore, the plane was never found, the bodies never recovered.
Forty-three years later a team of investigators gathered together equipped with modern underwater technology to reopen this cold case. Using OceanServer’s Autonomous Underwater Vehicle (AUV) with side scan sonar, the team began to search the lake bottom. “We ran transects with the AUVs. Our systems have side scan sonar and are the perfect tool for getting the necessary data in deeper water,” said Jim Kirk, Marketing Director for Ocean Server. “We can get into those areas of the lake that would be difficult with towed side scan.” Once the targets were located, a team from SeaBotix and Greensea Systems then deployed the SeaBotix vLBV ROV with Greensea Systems’ SmartFlight software to identify the targets.
A large part of the search area is in several hundred feet of water making the investigation more challenging. Low visibility made locating the jet difficult. Added to that is the unpredictability of the lake itself. Lake Champlain is 490 square miles and lies in the Lake Champlain Valley between Vermont’s Green Mountains, and the Adirondack Mountains of New York.
The expedition had two phases. During phase one the team used AUV and side scan sonar technology to run transects in areas along the flight path. Once the side scan sonar data was reviewed by the team, a decision was made to inspect targets that looked promising.  Phase two was the dive operations phase. “Our role is to identify targets that have been found during the search phase,” said Ben Kinnaman, CEO of Greensea Systems. “What we do is take our SeaBotix Remotely Operated Vehicle and put it down on the target site. Because there is no visibility on the bottom and it is very dark, we use sonar and our navigation software SmartFlight to find the object. SmartFlight enables us to punch in the coordinates, both latitude and longitude from the AUV data. The ROV then drives to that position. Once we are at those coordinates, we turn on the lights to see what is down there”.
The vLBV300 ROV is rated to 300 meters (984 feet) and has bollard thrust with 18.1-22.5 kgf (40-50 lbf) forward.  Dual vertical thrusters offer greater vertical control and roll stabilization. When using the SmartFlight software, the pilot can engage the forward thrusters and the vehicle will drive to the set coordinates. “We provide a lot of autopilot capabilities, so dynamic positioning, auto altitude, auto depth. We also provide high level mission planning. So you can organize your entire mission before you go out and then you can just persecute the targets efficiently. Being in the field can be costly so anything that can make the operation more efficient will save money in the end,” explained Colin Riggs, Software Developer at Greensea Systems.
Operations on Lake Champlain began late last summer. The family of the lost pilot, George Nikita, waited patiently onshore during field operations. The team located and identified a number of targets, although none of them to date has proven to be the lost aircraft. The search was suspended until next year as the crew regroups over the next several months and looks at plans to bring in other sensors for both the AUV and ROV platforms
Fred Fayette lives on Lake Champlain and was involved in the original side scan search shortly after the plane was lost. All these years later, he is a part of this new crew currently taking up the search. “It is like finding a needle in a haystack. It’s a large area we are looking in. We have all this great technology from SeaBotix, OceanServer, and Greensea Systems. The operations so far have gone well. We have had good weather. The ROV functioned well with the SmartFlight. We were able to get on the sites quickly. The problems we ran into on the second investigation were due to changes in the lake since the last time we were out there. There have been several storms causing a large amount of vegetation to head into deeper water. We have surveyed this lake for years and have found over three hundred ship wrecks. We have found two planes, neither of which is this plane. We have found thousands of anomalies that we just do not know what they are. One of those could be our aircraft. It is not an easy job. I always tell people when they ask me why we have never found this particular plane. I always respond the same…the lake you know… she doesn’t give up her secrets easily.”
Before operations commenced, several vessels gathered on the lake including one with the Nikita’s family onboard. A few words of gratitude for the investigators efforts were expressed over the boats radio by family members, including George Nikita’s daughter who was three years old when the plane went missing.  A wreath was then placed on the surface of Lake Champlain in memory of loved ones lost. Facing a daunting task, the investigative team continues to pour over documents and side scan sonar images hoping that in the near future the lake may finally… give up just one more of her secrets. 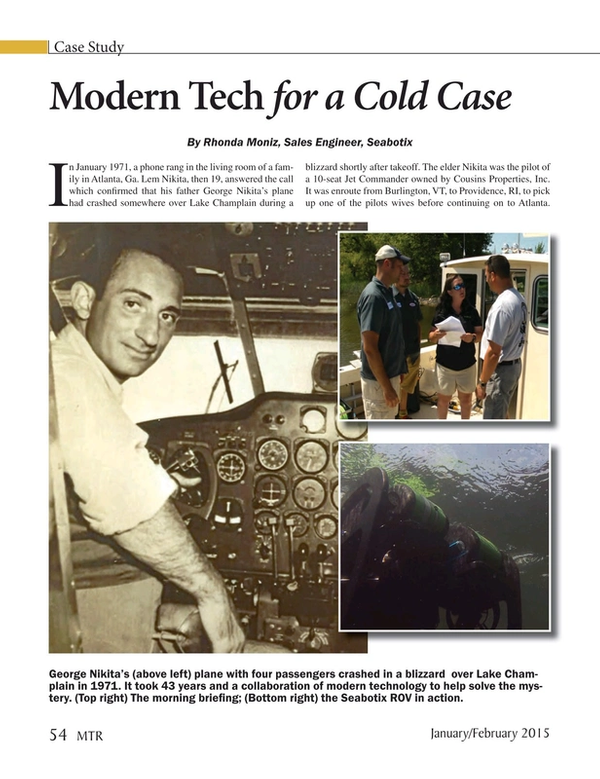