Success in a down market? It is possible, as MarPro found at one of the world’s largest carriers in one of shipping’s most volatile sectors.

When CMA CGM signed a deal selling 49% of its Terminal Link division to China Merchants Holdings (International) for $535 million in January 2013, it sealed a remarkable turnaround for the world’s third largest container carrier. Just three years ago, the Marseilles-based shipping company controlled by the Saade family was almost crippled by debt, struggling with heavy losses in 2009 after the financial crisis. Improvements in 2010 were wiped out by a slump in freight rates in 2011.
Late last year, however, the French line surprised the world when it announced it was on course for a full-year profit. Its results in the nine months up to September showed a profit of $284 million, no small achievement in a highly volatile trading environment. At the time of writing the final 2012 financial results for CMA CGM and its peers were not yet available, but the profit warnings were coming thick and fast.

Bucking the Trend
Across the container shipping industry, carriers are preparing to report significant losses attributable to excess capacity of container vessels, falling demand, rising fuel prices and weak freight rates. Too much supply, too little demand and too high costs – a cycle of diminishing returns.
China’s biggest shipping company, the state-controlled Cosco, warned in late January that it would report “a large net loss” for 2012. The shipping giant did not indicate the size of the loss but analysts were more than happy to provide an estimate: $1 billion. Maersk’s container division expects a “negative” result for the past year after losing $521 million in 2011 and puts the blame on overcapacity and a 25% drop in global freight rates in 2012. On Asia-Europe, the Danish carrier said the drop in prices was almost 60%. Separately, NOL’s liner shipping business APL announced that it expected to post a full year loss for 2012 and German line Hapag Lloyd was down 94% for the first nine months and unlikely to claw its way back into the black.

Family Recipe
Curiously, the French company operates on the same trades and on the same planet as these carriers, so how did the line manage to profit while the competition founded in turbulent financial waters? To find the answer, we need to travel back to the dark days of 2009. By the middle of that year, CMA CGM was in serious trouble. The French line had built up debts of $5.6 billion, and its orderbook in that crippling post financial crisis period was 60% of its fleet. The carrier could simply not continue to operate with such a chronic debt overhang. Retail spending across the world’s major markets had dried up, and as the transporters of 90% of global consumer goods, container shipping companies were being hit hard. CMA CGM needed help, and fast. Going out of business was not an option, and the determination of the founding Saade family to maintain control of the line it has run for more than three decades simply cannot be overstated.
CMA (Compagnie Maritime d’Affretement) was established by Jacques Saade in 1978, a Lebanese who settled in Marseilles and started his line with one 200 TEU ship, initially serving Mediterranean Europe, Lebanon and Syria, where brother Johnny Saade managed the agencies, then expanding to North Africa, a Dynamar report stated.
In 1999, CMA merged with state-owned CGM (Compagnie Generale Maritime), a loss-making entity that the French government finally decided to privatize. Because CGM had withdrawn from several trades before its privatization, the move was a logical one and served the new carrier well.
Jacques Saade proved to be an astute shipping executive, building his liner services even as the container market began to expand across the long-haul trade lanes.
Most of CMA CGM’s growth has been by acquisition, but two large purchases stand out. In 2007, the French line acquired Cheng Lie Navigation of Taiwan, an intra-Asia specialist, and US Lines that served the US West Coast and Australasia trade. US Lines is a subsidiary of CMA CGM-owned ANL Container Line. Those acquisitions opened new markets, but came just a year before the greatest financial meltdown the world had ever seen. The financial crisis hit while container lines were riding a wave of profitability with the newbuilding orderbook reaching far into the distance.

Orderbooks & Overcapacity
At the beginning of 2009, CMA CGM had orders for 73 ships comprising a total of 596,000 TEUs, 60% of its fleet. The financing of these vessels was a huge contributor to the massive debt that had been accumulated by the line. The orderbook was looking more like the plank. That’s because in January 2009, container throughput in Shanghai, then the world’s second-busiest container port, plunged 15%; in Shenzhen the drop was a steeper 17.5%. The declines were the worst year-on-year performance ever for the two ports. And in Hong Kong, container throughput fell 23.2% in January, the worst container throughput since the early 1990s.
The financial impact of China’s falling exports on container lines was devastating. First half industry losses in 2009 reached $6.9 billion, with CMA CGM down more than $700 million. With Saade family control as a non-negotiable position, the line went in search of ways to restructure its mounting debts.  By the middle of 2009, a committee of 77 banks and financial institutions was involved in restructuring the debt and coming up with an interim package. But what CMA CGM also desperately required was an injection of cash, and the line began casting about for potential investors. The white knights eventually arrived in 2010 in the form of Turkish family-owned container terminal and shipping operator Yildirim Group with an investment of around $500 million in return for five-year convertible bonds equal to 20% of the share capital and three seats on the board.
A bond issue in the first half of 2011 raised around $950 million and CMA CGM reached an agreement with creditor banks on its debt restructuring. It also cancelled orders for 12 vessels, postponed the delivery of 30 others, sold 50% of its stake in Malta Freeport to Yildirim for $285 million and implemented a vigorous cost-cutting program.
In 2012, the carrier saw Yildirim adding another $100 million into the French line, giving it the rights to an additional 4% stake in the company, along with additional investment from French sovereign fund Fonds Stratégique d’Investissement (FSI) that injected $150 million in bonds redeemable as shares.
Alphaliner valued CMA CGM equity after the September 2012 deal at $2.5 billion with a net debt of $5 billion, giving CMA CGM a total enterprise value of $7.5 billion. The Terminal Link sale to CMHI in January 2013 capped a remarkable period for the French company.
“The finalization of the debt restructuring combined with new equity injection from FSI and Yildirim Group and the sale of 49% of Terminal Link will allow CMA CGM to operate with the required financial flexibility and constitutes key milestones before contemplating an IPO,” CMA CGM executive officer Rodolphe Saade said in a recent statement. With other CMA CGM executives unavailable for comment in this story, we turned to the shipping analysts to find out how the carrier had managed to turn its bleak position around.
Maritime consultancy Dynamar’s Dirk Visser said CMA CGM was not doing anything “radically different” to the other carriers to finish the year in the black. “But perhaps it has benefitted from the aggregation of marginal gains, teeny improvements here, there and all over that add up to a significant improvement,” Visser said. He added, “As such, we don’t think that CMA CGM’s Q2 and Q3 2012 results are actually the results of what they have done in 2012, more accurately accruing the benefit from a range of measures they undertook before and during 2012.”
Visser said those measures included interim agreements with banks in 2009, the entrance of Yildirim as a shareholder in 2011, reducing and better managing the orderbook (now just 15 ships), selling vessels, cutting costs, controlling charter costs and entering into deeper strategic partnerships with Maersk and MSC.
Lars Jensen of SeaIntel said the Maersk and MSC partnerships made a significant contribution to the line’s turnaround, as “that has indeed allowed them access to the lower unit costs of large vessels on some of the main trades.” Separately, an Alphaliner report said the superior performance of CMA CGM and Maersk were more closely related to their trade mix. “Compared to their competitors, both carriers have a large share of volumes on the Asia-Europe and Latin America trades, which have performed better than other trade lanes during the third quarter,” the report stated.
Drewry’s senior manager of equity research Rahul Kapoor said CMA CGM’s better than market expectations performance in 2012 was primarily driven by a strong recovery in freight rates in its core trade lanes, volume gains and achieved cost efficiencies. “Along with recovery in freight rates, the positive tailwinds from declining fleet wide bunker consumption due to further slow steaming and tighter cost controls including network optimization and reduction in chartering costs paved way for much improved operating performance,” Kapoor said.
Analyzing the last reported third quarter numbers, Kapoor said the French line had already achieved $550 million in cost savings for the first three quarters of 2012, surpassing an initial full year FY12 savings target of $400 million. “Company operating expenses suggest higher cost efficiencies were gained from lower bunker and chartering costs,” he said.
Achieving success in a down market is indeed possible, and the carrier has managed to fight its way out of a tight corner. The series of measures CMA CGM was forced to implement over the last three years may have diluted the Saade family share of the business, but they have left the carrier executives wiser and the line in a better position to capitalize when general rates increases are successfully implemented.

(As published in the 1Q edition of Maritime Professional - www.maritimeprofessional.com) 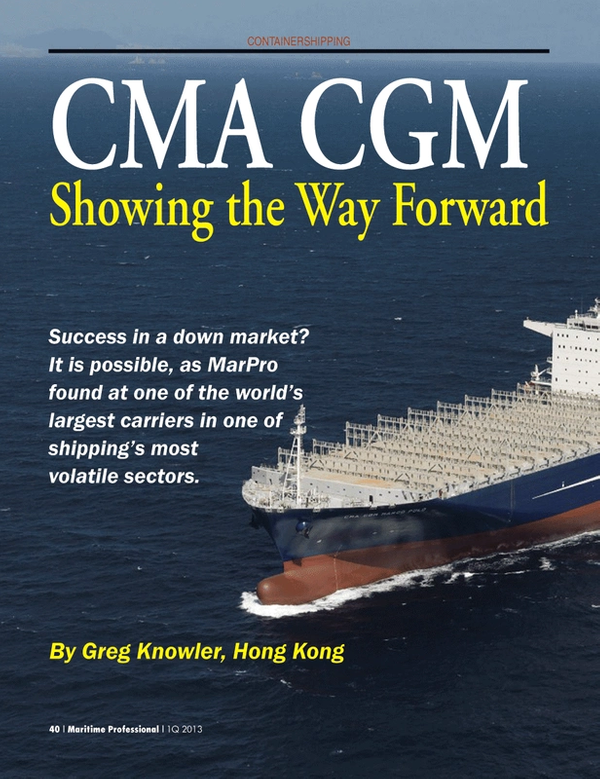