Salvage 101: The Importance of Cooperation

Cooperation between the shipowner, their underwriters, salvors and shore-based authorities is vital for a successful salvage operation and should begin at first notification of a casualty. This cooperation, however, should begin long before there is a casualty with contingency planning, preparation and training. Cooperative efforts, rather than conflict will go a long way towards mitigating the potential for environmental damage and pollution; damage to the vessel or its cargo and, most importantly, may prevent loss of life or injury to the crew.

Not your Father’s Salvage Operation
Today, salvage operations tend to be more expensive and technically complex compared to those in the past. This is, in large measure, due to the increased size of vessels, increased value of their cargo and external influences such as more demanding requirements from coastal state authorities.  Governments look to protect their waters and it is rare when the local regulatory and government officials do not become intimately involved in aspects of the salvage service. The salvor is often at the mercy of these influences which can translate into added expense for the shipowner and underwriters.

Some examples of areas where cooperation can be heightened include contracting terms and conditions, dealing effectively with authorities, attending the vessel and ensuring places of refuge are made available, just to name a few.

Lloyd’s Open Form (LOF) is still the most widely used salvage contract, even after over a century of constant use. At its heart is the requirement for the salvor to use his “best endeavors” to save the property and to prevent or minimize pollution damage while engaged in salvage operations. The Salvage Convention of 1989 imposes a similar requirement. Best endeavors inherently require the salvor to cooperate with others; he cannot operate in isolation. That effort needs to be reciprocated by the others who are also involved. Importantly, it also requires shipowners and insurers to be familiar with LOF and to understand its benefits. Improving the understanding of LOF is an area on which both the International Salvage Union and Lloyd’s intend to campaign.

Understanding LOF
LOF is often misunderstood. It is certainly not skewed in favor of the salvor who bears a high risk because of the “no cure - no pay” nature of the contract. Furthermore, salvors are liable for any misconduct or negligence in line with Article 18 of the 1989 Salvage Convention, which states, “a salvor may be deprived of a whole or part of payment due under the Convention to the extent the salvage operations have become necessary or more difficult because of fault or neglect on his part or if the salvor is guilty of fraud or other dishonest conduct.” This regime is in stark contrast to most of the LOF substitute contracts.

Emergency response now takes place in a world that has adopted a virtual “zero tolerance” attitude to marine spills. Major spills are now a relatively rare occurrence, but they do still occur. One of the salvor’s main roles is to stop this from happening:  keeping pollutants in the ship or safely removing them and thereby preventing an emergency turning into a pollution catastrophe.

In short, we have seen the entire focus of salvage activity change over the last 25 years with pollution defense now taking priority over property salvage. And that, of course, helps to reduce the liability of insurers. The cost of salvage seems very modest when compared to the eye watering costs that a major spill will incur. But a key element in reducing property or liability claims is the timely involvement of salvage assistance.

When a Casualty Occurs
Today, no Master or salvage officer can operate in isolation because modern communications ensure that there is a regular contact between vessel and offices ashore. The result is that when a casualty does occur, the Master can very often obtain guidance and advice from his owners and their advisers.  This may or may not be helpful. It may solve the problem, but it may also provide a false sense of security and introduce delay. Either way, a decision has to be made as to whether assistance, including salvage assistance, is needed.

A plan of action must be developed, and this will need to take into account the nature, circumstances and urgency of the situation; the extent to which the vessel’s systems remain operational; the threat of pollution, manpower and material requirements and finally, what measures will be possible to avoid injury or loss of life if the vessel is in imminent peril.

A competent master will, in most cases, be best placed to assess these considerations and will be able to do so quickly. Considering these questions “second hand” from a warm office many hundreds or thousands of miles away is often not helpful and can lead to delay. In the early stages of a casualty situation, therefore, the best cooperation can be achieved if those actually at the scene are trusted to make decisions without undue influence and pressure from the shore.

Salvors do not achieve their successes in isolation. The outcome of many operations will depend on effective and efficient cooperation with many different parties most of whom have different views and objectives, including the authorities ashore. There are many conventions, guidelines, national response plans, rules and regulations which become relevant in any casualty. And, there are practical issues like equipment being delayed by customs or access to the ship being blocked or impeded. Sometimes, seemingly unreasonable financial demands may be made, all of which can prevent or hamper a successful outcome.

In most cases, the aim is to help the coastal state and all other parties to swiftly identify the best environmental option. The threat or reality of pollution will almost certainly generate acute political problems and sensitivities – at regional, national and, sometimes, international levels. There will be tension between central and local government and these pressures are felt most in the coastal communities which bear the brunt if pollution occurs or threatens.

Before the Casualty
Response effectiveness is increased by detailed contingency planning and joint training. Best practice calls for joint training and exercises involving response agencies and commercial salvors. Salvors need freedom of action if they are to use their best endeavors. They need to be confident that their plan, personnel and equipment will be supported by the authorities and the ship’s interests. Most importantly, operational decisions must rest with the salvor, who has the experience and expertise to make time-critical safety and environmental judgements.

The International Salvage Union (ISU), the global trade association for the marine salvors, regards the UK model as an example of best practice in terms of command, control and cooperation. In the UK, a senior civil servant is appointed as the Secretary of State for Transport’s Representative for maritime salvage and intervention (SoSREP), who combines an understanding of salvage with the appropriate amount of delegated political authority. In fact, under the UK system, politicians may not intervene while a salvage operation is still in progress. All the key decision-making is focused on just two individuals: SoSREP and the salvage master. This model is further enhanced when the ship’s interests are aligned and supportive. In the United States, the Oil Pollution Act of 1990 (OPA-90) attempts to put into place a number of the cooperation issues discussed previously. While still a “work in progress,” OPA-90 in its most basic form requires salvors, owners and insurers to “pre-contract” and otherwise attempt to develop some level of understanding before a casualty.

Anyone who has been involved in marine casualty response knows that the potential for disagreement, delay and confrontation is all too apparent. Circumstances are usually challenging, the environment is difficult, time is tight, the authorities are demanding and the sums of money at stake are enormous.

But it is essential that salvors and ship interests are aligned and work cooperatively together to prevent loss of life, injury and damage to the marine environment. Speed of response is the key and delay brought on by interference from those who are not at the scene and who do not have the full picture is to be discouraged. It is testament to the willingness of all parties to work like this that in the majority of cases there is real cooperation and, as a direct result, a successful outcome. 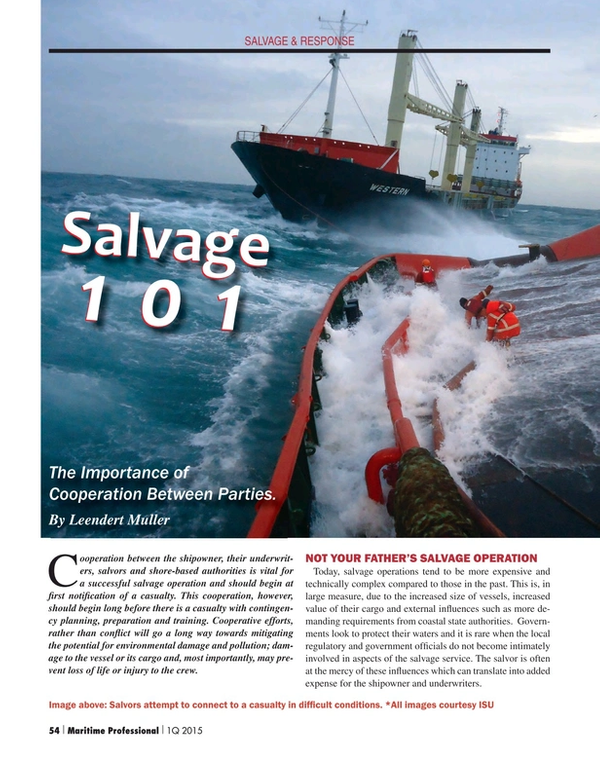