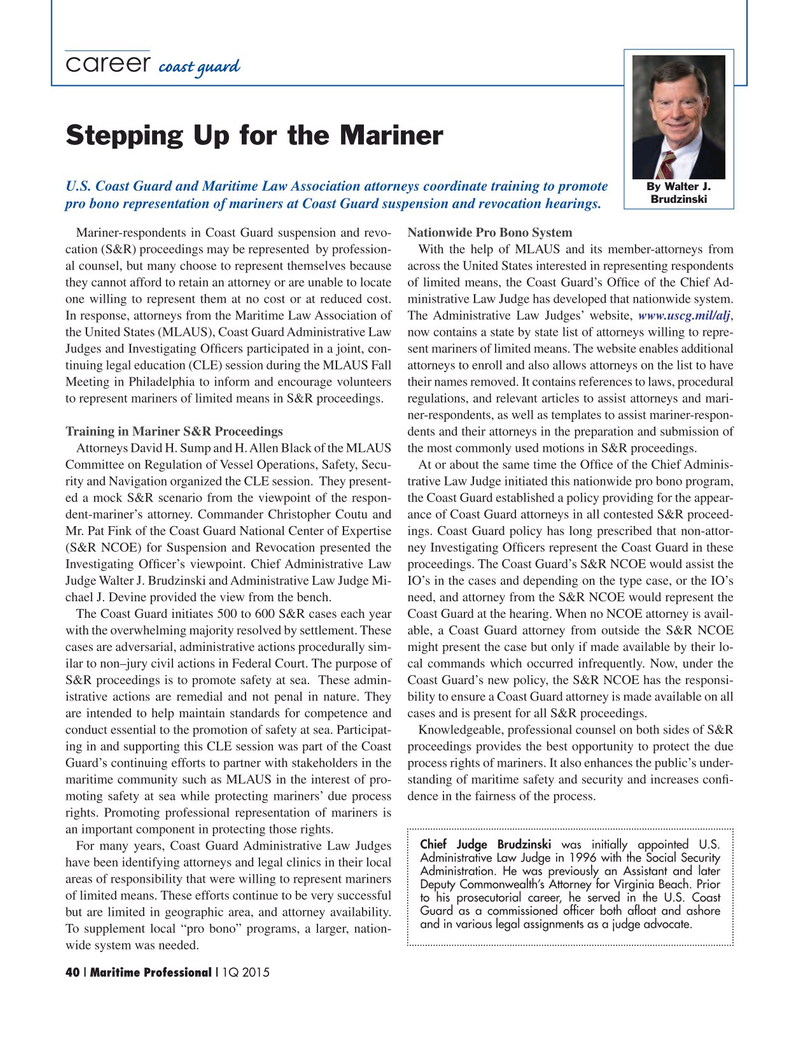 Stepping Up for the Mariner

Mariner-respondents in Coast Guard suspension and revo- Nationwide Pro Bono System cation (S&R) proceedings may be represented by profession- With the help of MLAUS and its member-attorneys from al counsel, but many choose to represent themselves because across the United States interested in representing respondents they cannot afford to retain an attorney or are unable to locate of limited means, the Coast Guard’s Of? ce of the Chief Ad- one willing to represent them at no cost or at reduced cost. ministrative Law Judge has developed that nationwide system.

Judges and Investigating Of? cers participated in a joint, con- sent mariners of limited means. The website enables additional tinuing legal education (CLE) session during the MLAUS Fall attorneys to enroll and also allows attorneys on the list to have

Meeting in Philadelphia to inform and encourage volunteers their names removed. It contains references to laws, procedural to represent mariners of limited means in S&R proceedings. regulations, and relevant articles to assist attorneys and mari- ner-respondents, as well as templates to assist mariner-respon-

Attorneys David H. Sump and H. Allen Black of the MLAUS the most commonly used motions in S&R proceedings.

Committee on Regulation of Vessel Operations, Safety, Secu- At or about the same time the Of? ce of the Chief Adminis- rity and Navigation organized the CLE session. They present- trative Law Judge initiated this nationwide pro bono program, ed a mock S&R scenario from the viewpoint of the respon- the Coast Guard established a policy providing for the appear- dent-mariner’s attorney. Commander Christopher Coutu and ance of Coast Guard attorneys in all contested S&R proceed-

Mr. Pat Fink of the Coast Guard National Center of Expertise ings. Coast Guard policy has long prescribed that non-attor- (S&R NCOE) for Suspension and Revocation presented the ney Investigating Of? cers represent the Coast Guard in these

Judge Walter J. Brudzinski and Administrative Law Judge Mi- IO’s in the cases and depending on the type case, or the IO’s chael J. Devine provided the view from the bench. need, and attorney from the S&R NCOE would represent the

The Coast Guard initiates 500 to 600 S&R cases each year Coast Guard at the hearing. When no NCOE attorney is avail- with the overwhelming majority resolved by settlement. These able, a Coast Guard attorney from outside the S&R NCOE cases are adversarial, administrative actions procedurally sim- might present the case but only if made available by their lo- ilar to non–jury civil actions in Federal Court. The purpose of cal commands which occurred infrequently. Now, under the

S&R proceedings is to promote safety at sea. These admin- Coast Guard’s new policy, the S&R NCOE has the responsi- istrative actions are remedial and not penal in nature. They bility to ensure a Coast Guard attorney is made available on all are intended to help maintain standards for competence and cases and is present for all S&R proceedings. conduct essential to the promotion of safety at sea. Participat- Knowledgeable, professional counsel on both sides of S&R ing in and supporting this CLE session was part of the Coast proceedings provides the best opportunity to protect the due

Guard’s continuing efforts to partner with stakeholders in the process rights of mariners. It also enhances the public’s under- maritime community such as MLAUS in the interest of pro- standing of maritime safety and security and increases con? - moting safety at sea while protecting mariners’ due process dence in the fairness of the process. rights. Promoting professional representation of mariners is an important component in protecting those rights.

Administration. He was previously an Assistant and later areas of responsibility that were willing to represent mariners

Deputy Commonwealth’s Attorney for Virginia Beach. Prior of limited means. These efforts continue to be very successful to his prosecutorial career, he served in the U.S. Coast

Guard as a commissioned of