Read this page in Pdf, Flash or Html5 edition of May 1977 Maritime Reporter Magazine 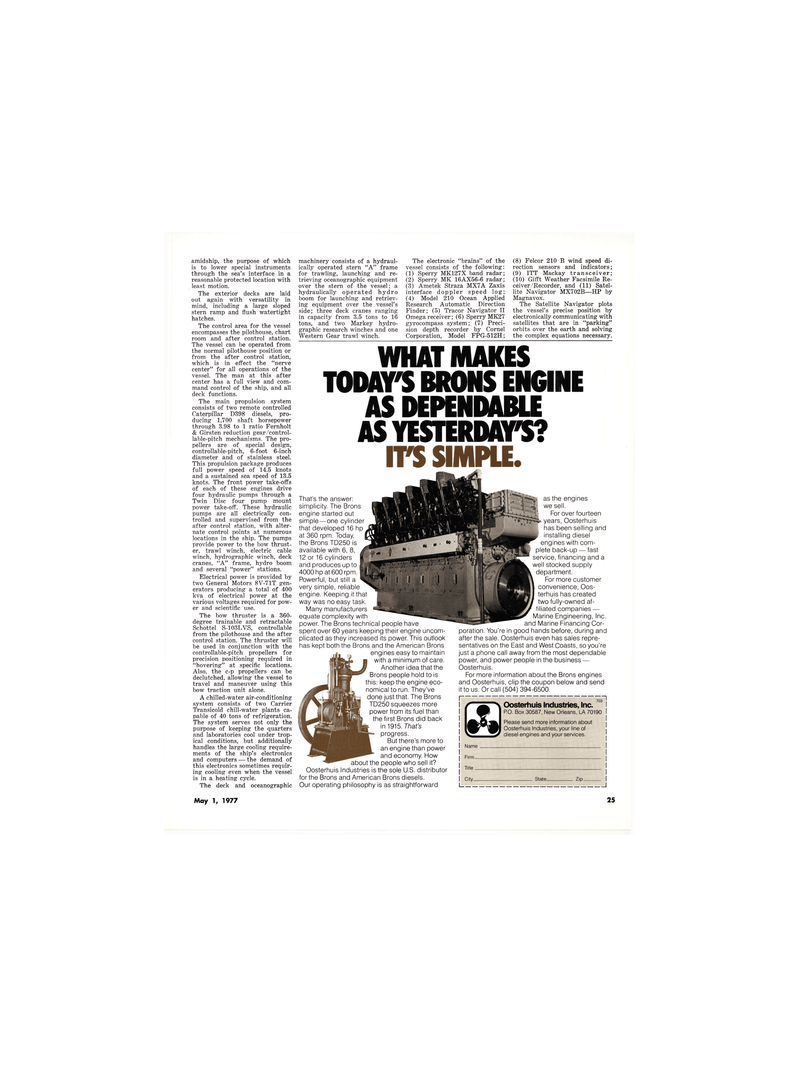 amidship, the purpose of which is to lower special instruments through the sea's interface in a reasonable protected location with least motion.

The exterior decks are laid out again with versatility in mind, including a large sloped stern ramp and flush watertight hatches.

The control area for the vessel encompasses the pilothouse, chart room and after control station.

The vessel can be operated from the normal pilothouse position or from the after control station, which is in effect the "nerve center" for all operations of the vessel. The man at this after center has a full view and com- mand control of the ship, and all deck functions.

This propulsion package produces full power speed of 14.5 knots and a sustained sea speed of 13.5 knots. The front power take-offs of each of these engines drive four hydraulic pumps through a

Electrical power is provided by two General Motors 8V-71T gen- erators producing a total of 400 kva of electrical power at the various voltages required for pow- er and scientific use.

The bow thruster is a 360- degree trainable and retractable

Schottel S-103LVS, controllable from the pilothouse and the after control station. The thruster will be used in conjunction with the controllable-pitch propellers for precision positioning required in "hovering" at specific locations.

Also, the c-p propellers can be declutched, allowing the vessel to travel and maneuver using this bow traction unit alone.

The system serves not only the purpose of keeping the quarters and laboratories cool under trop- ical conditions, but additionally handles the large cooling require- ments of the ship's electronics and computers — the demand of this electronics sometimes requir- ing cooling even when the vessel is in a heating cycle.

The deck and oceanographic machinery consists of a hydraul- ically operated stern "A" frame for trawling, launching and re- trieving oceanographic equipment over the stern of the vessel; a hydraulically operated hydro boom for launching and retriev- ing equipment over the vessel's side; three deck cranes ranging in capacity from 3.5 tons to 16 tons, and two Markey hydro- graphic research winches and one

The Satellite Navigator plots the vessel's precise position by electronically communicating with satellites that are in "parking" orbits over the earth and solving the complex equations necessary. as the engines we sell.

For over fourteen years, Oosterhuis has been selling and installing diesel engines with com- plete back-up — fast service, financing and a well stocked supply department.

Marine Engineering, Inc. and Marine Financing Cor- poration. You're in good hands before, during and after the sale. Oosterhuis even has sales repre- sentatives on the East and West Coasts, so you're just a phone call away from the most dependable power, and power people in the business —

For more information about the Brons engines and Oosterhuis, clip the coupon below and send it to us. Or call (504) 394-6500. 703 Oostertiuis Industries, Inc.

Oosterhuis Industries, your line of diesel engines and your services.

Powerful, but still a very simple, reliable engine. Keeping it that way was no easy task.

Many manufacturers equate complexity with power. The Brons technical people have spent over 60 years keeping their engine uncom- plicated as they increased its power. This outlook has kept both the Brons and the American Brons engines easy to maintain with a minimum of care.

Another idea that the

Brons people hold to is this: keep the engine eco- nomical to run. They've done just that. The Brons

TD250 squeezes more power from its fuel than the first Brons did back in 1915. That's progress.

But there's more to an engine than power and economy. How about the people who sell it?

Oosterhuis Industries is the sole U.S. distributor for the Brons and American Brons diesels.

Our operating philosophy is as straightforward