The Maritime Administration has released a group of 15 technical reports evaluating the feasibility of heavy-duty gas turbines as a competitive and acceptable form of marine propulsion generation.

The reports were prepared under a contract awarded in 1970 to the General Electric Company, Gas Turbine Products Division, Schenectady, N.Y.

The total technical effort was completed in a period of five years and at a total cost of $8,025,000, which was shared equally by General Electric and MarAd. The project encompassed a wide range of research and development activities, including: research on fuel additives, turbine blade coating and cladding materials, turbine cleaning techniques and fuel oil washing; and design, development and testing of an RF Plasma Fuel Oil Analyzer, internally reversing gas turbine and regenerators having improved materials and cyclic life.

The objective of the project was to pursue those design and development efforts that would permit the "marinization" of the heavy-duty gas turbine. Basically, this implied that the "marine" heavy-duty gas turbine must be capable of burning typical marine residual fuels having high sulfur, vandium and sodium levels; capable of developing the required astern power for maneuvering; competitive with other forms of power generation (primarily steam turbine) from both a fuel consumption and maintenance point of view.

The reports are available from the National Technical Information Service, 5285 Port Royal Road, Springfield, Va. 22161. The following is a list of the reports, including price and order numbers: Task 1/6 — Operational Performance and Maintenance Improvement. 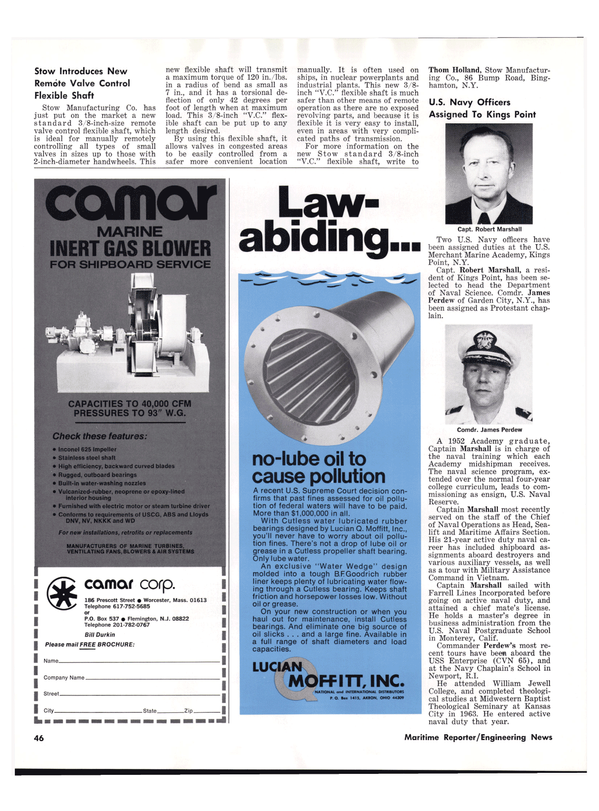