The 23,000-ton submarine tender Frank Cable, second of three of the 644-foot auxiliary ships Lockheed Shipbuilding is constructing for the U.S. Navy, was launched on January 14 at the Seattle, Wash., shipyard.

Frederick H. Michaelis, Chief of Naval Material, christened the ship before it slid down Lockheed's Shipway 3 on Harbor Island into the West Waterway of the Duwamish.

Admiral Michaelis was the principal speaker in the launch ceremonies that preceded the christening of the Frank Cable.

Flower girl for the ceremony was Miss Jodi Kartes, daughter of Robert D. Kartes, AS-39 production manager, and his wife, Verna.

G. Graham Whipple, president of Lockheed Shipbuilding and Construction Company, served as master of ceremonies, while Roy A.

Anderson, chairman of the board of directors, Lockheed Corporation, introduced the principal speaker.

C.R. Bryan, Commander, Naval Sea Systems Command, also addressed the crowd of employees, Navy people, and others that gathered for the ceremonies.

Tugs immediately moved in to make lines fast to tow the ship to Lockheed's Yard 2 in West Seattle for outfitting. The Frank Cable, expected to be delivered to the U.S. Navy in late 1979, joined a sistership, Emory S. Land (AS-39), which was launched May 4, 1977.

Frank Cable, for whom the AS-40 is named, was a pioneer submarine engineer whose first introduction to submarines was the Holland.

Before the turn of the century, John P. Holland built the Holland in Elizabethtown, N.J.

Mr. Cable, an electrical engineer, was sent by his firm to assist with electrical work after the Holland accidentally sank at its dock. Shortly thereafter, Mr. Cable found himself as engineer in charge and trial captain for the Holland. Many of his ideas were incorporated into the Holland prior to her acceptance as the Navy's first successful submarine. Among his other accomplishments, Mr. Cable helped train the Navy's first submarine crews. He organized the New London Ship and Engine Company that built the first marine diesel engine in the U.S., a development that led to safer submarines.

His company was incorporated into the Electric Boat Company, now a subsidiary of General Dynamics. Keel for the AS-40 Frank Cable was laid March 2, 1976.

Keel-laying ceremonies on Shipway 1 for the third of the ships being built in the yard, McKee (AS-41) followed the launch of the Frank Cable.

Rear Adm. Andrew Irwin McKee, for whom the AS-41 is named, pioneered modern submarine design and development. Beginning in 1926 as Officer in Charge of Submarine Design, he later rendered service in building and repairing the highly successful World War II submarines. By retirement in 1947, he had been awarded the Legion of Merit, Bronze Star, and Gold Star in lieu of Second Legion of Merit. His civilian work in design and engineering at Electric Boat-General Dynamics saw introduction of Trident-class submarines before his death in 1976 at the age of 80.

The three submarine tenders rank as among the largest Naval ships to be built in the Northwest. The Frank Cable and the Emory S. Land are being built under a contract awarded to Lockheed by the Naval Sea Systems Command, November 20, 1974. The McKee is being funded under an incremental contract announced during the Land launching on May 4, 1977. Together, the three ships represent nearly a half billion dollars in ship- building contracts. Some 3,000 persons presently work at the Lockheed yards. While the company carries on active ship repair and commercial steel businesses, the submarine tender work represents the bulk of the company's activities.

The submarine tender Frank Cable (AS-40) and its sisterships of the AS-39 class—Emory S. Land (AS-39) and McKee (AS-41) —will provide mobile support bases for nuclearpowered SSN-688 Los Angeles-class highspeed attack submarines. They are auxiliary ships that will provide submarines and their crews repairs, spare parts, provisions, and medical, dental, mail, legal, and other services.

Among the some 50 technical shops aboard will be those that deal with such things as storage batteries, antennas, electronics, electrical systems, gyrocompass, machining, welding, optical, pipe, typewriters, watches, sheet metal, projectors, carpentry, and more. The ships will provide living quarters for better than 1,000 men manning the shops and operating the ship, in addition to temporary quarters for submarine crews.

Submarines moored alongside for servicing, maintenance, repair, and reprovisioning can be provided with compressed gases, steam, diesel fuel, water, electricity, and various other services.

Lockheed Shipbuilding and Construction Company operates the largest privately owned shipyard in the Pacific Northwest, and currently employs approximately 3,000 people. Lockheed Corporation acquired the Seattle shipyard in 1959 and operates it as a wholly-owned subsidiary. There are actually two shipyards in Seattle—one on Harbor Island devoted largely to constructing hulls which are launched into the Duwamish River, and one across the waterway largely devoted to outfitting and ship repair. The firm's principal product lines include shipbuilding, ship repair, and commercial steel fabrication and processing. Among the 40 ships and other marine structures Lockheed has delivered have been ferries, light cruisers, drilling vessels, destroyer escorts, frigates, assault transports, destroyers, a hydrofoil, a bulk carrier, and icebreakers. 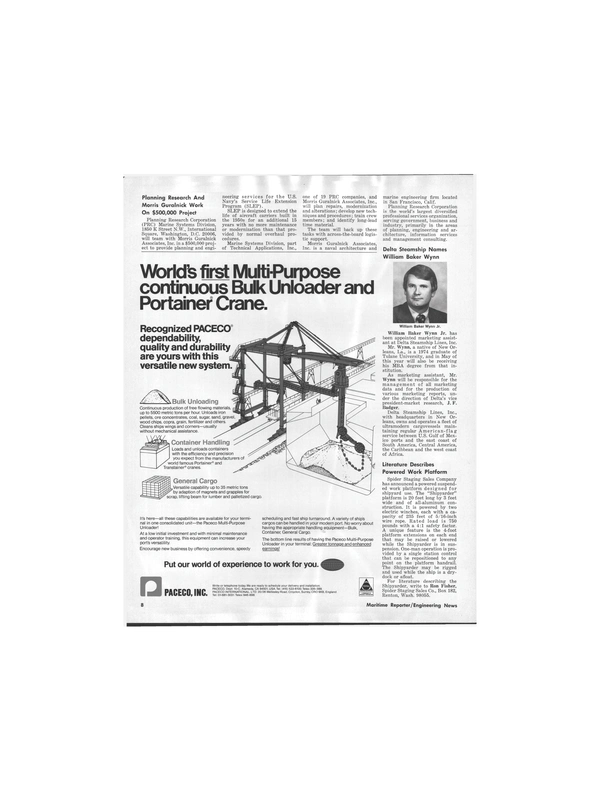 Other stories from March 1978 issue