Acadian Will Build Up To Four Clipper-Class Container Feeder Ships

The Acadian Marine group of companies based in New Orleans, La., has announced the signing of contracts valued at $18 million and its construction plans f o r several 350-foot "Clipper-Class" feeder containerships.

The Acadian Group recently inked contracts for the charter of 10 of its ships. The charters are long-term contracts for its ships in different parts of the world, including Mexico, Nigeria, Bermuda, and the Caribbean area.

The charters are with major oil companies, governments, and national oil companies for offshore oil service, seismograph, and container service.

Prieur J. Leary Jr., president, stated that the year-end record backlog for the group is the result result of the worldwide demand for energy and the recognition of the need for small and medium-sized c o n t a i n e r vessels. Mr. Leary stated that at the present time, the value of The Acadian Group's fleet, including four 230-foot Mariner- Class, SCR Diesel Electric vessels under construction, has swelled to 42 million dollars.

Acadian owns and o p e r a t es ships in the offshore oil industry, the container trade, and the seismograph and research trades off the coast of 20 different countries.

In addition, it has a container division which utilizes containers, trucks, and cranes, to load and unload its vessels.

Mr. Leary also announced the group's plans to build up to four C l i p p e r - C l a s s feeder container vessels; proposals are presently in the hands of U.S. shipyards. The 350-foot, high-speed coastal traders will offer major shipping companies the use of smaller vessels to economically feed the larger trans-Atlantic containerships, the same way smaller airplanes feed jumbo aircraft. The Clipper-Class vessels will measure 350 feet by 62 feet by 26 feet and will make 18 knots. These vessels will be able to carry 200 forty-foot containers and will also have roll-on/ roll-off capability. They will be U.S.-flag, built in U.S. shipyards and will trade in and around the North Sea, the East Coast of the United States, and the U.S. Gulf Coast. 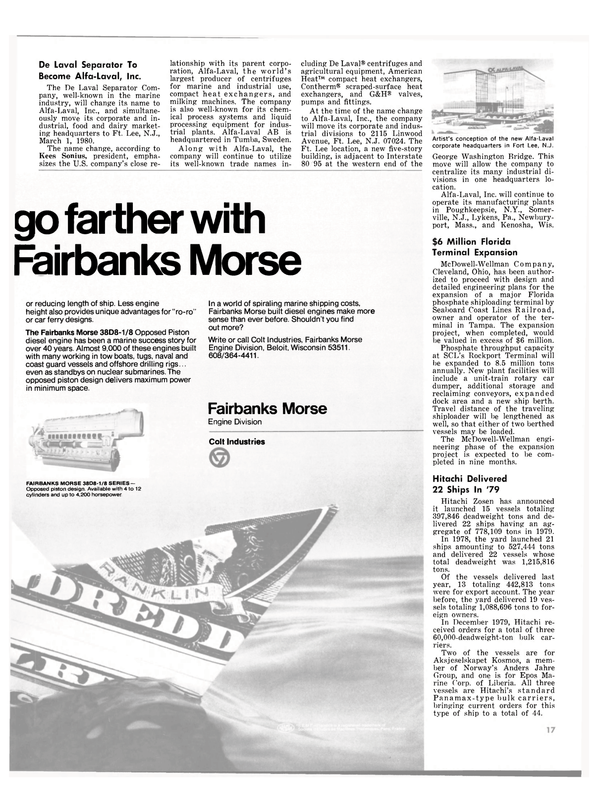