McAllister Brothers, Inc., the towing and transportation company headquartered in New York, is the parent company of the Bridgeport & Port Jefferson Steamboat Company. Brian A.

McAllister is president of the Steamboat company.

The company prospered and became one of New York's foremost excursion boat operators with a 24 fleet in excess of 20 vessels. The queen of the fleet was the majestic steamboat, the Grand Republic, which flew the McAllister colors.

For years, McAllister was one of the principal owners of the Bridgeport & Port Jefferson Steamboat Company and subsequently purchased all remaining stock bringing the steamboat company 1009c into the growing McAllister organization.

There is little physical similarity between the old and the new Grand Republic except the name.

The original vessel was a coalfired steamboat with a walking beam engine driving side wheels.

Although her hull was iron, all of her superstructure was wood.

The new Grand Republic, on the other hand, is built to the latest requirements of the American Bureau of Shipping and United States Coast Guard. Wood or other flammable material is not used in the construction of the vessel. The ves- sel is fitted with all the latest (Halon) automatic fire fighting and sprinkler systems from Wormald for maximum safety.

Built by Offshore Shipbuilding of Palatka, Fla., the 16-knot, 280- foot Grand Republic is the largest addition to McAllister Brothers' fleet.

Donald C. Hankin, Mc- Allister's vice president of engineering, designed the vessel, and working drawings were provided by Bold Craft Engineering of Jacksonville, Fla. In addition to carrying 1,000 passengers, eightyfive automobiles and/or a combination of trucks and recreational vehicles, the Grand Republic is fitted out with a large cocktail area and bar as well as full restaurant facilities.

The main engines for the twin screw vessel are the newest model 3516 T.A. Caterpillar diesels, fitted with 5:1 Reintjes reduction gears, delivering 1,500 h.p. per shaft. Propellers are Columbian Bronze 82-inch diameter four-blade stainless steel. Ships service generators and the emergency generator are also powered by Caterpillar diesels. The Grand Republic is equipped with a Schottel bow thruster with a 48-inch diameter propeller. This is powered by a 400 h.p. Caterpillar diesel through a Twin Disc reduction gear. All of the above Caterpillar equipment plus the Tug Mate machinery monitoring system, and the air controls with Reintjes and WABCO components were supplied by the H.O. Penn Machinery Company of Armonk, N.Y. Steering equipment consists of an S.S.I. 4-station electric-hydraulic system. The SKF O.K. shaft couplings were supplied by Bird Johnson. The shaft bearings were manufactured by Johnson Rubber and by Cooper Bearing. Radars and VHF aboard the Grand Republic are by Raytheon. The fathometer is from Datamarine.

One hundred years ago P.T.

Barnum, of Ringling Brothers Barnum & Bailey fame, started the Bridgeport & Port Jefferson Steamboat Company by building the first steamboat to operate across Long Island Sound between Bridgeport, Connecticut and Port Jefferson. He would be surprised at the success of his small ferry line and at the size and grandure of its newest ferry. 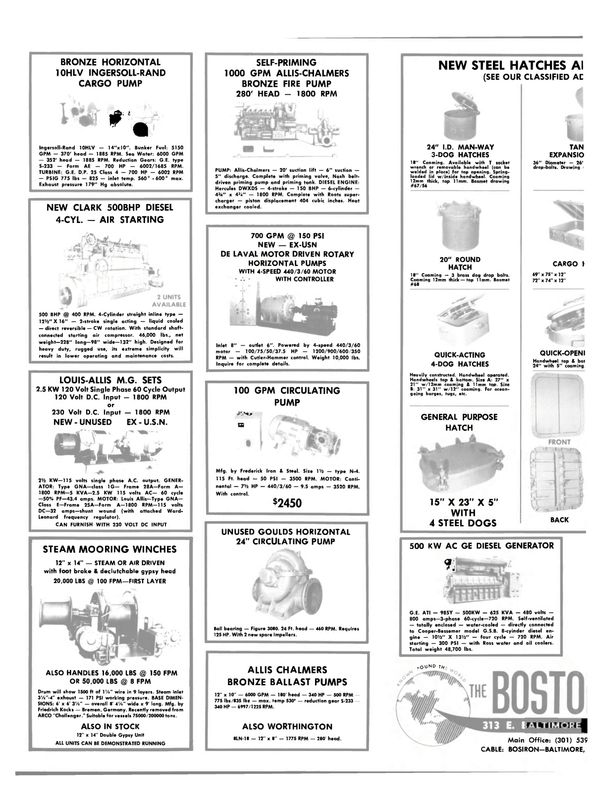