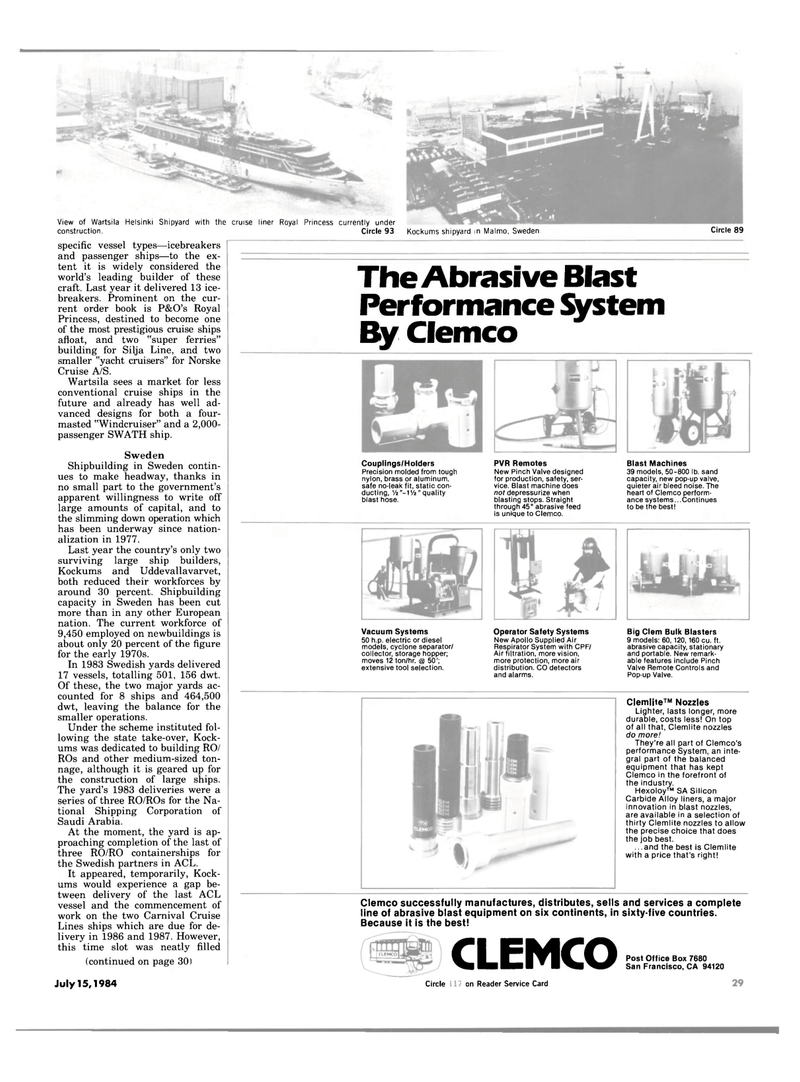 Princess, destined to become one of the most prestigious cruise ships afloat, and two "super ferries" building for Silja Line, and two smaller "yacht cruisers" for Norske

Wartsila sees a market for less conventional cruise ships in the future and already has well ad- vanced designs for both a four- masted "Windcruiser" and a 2,000- passenger SWATH ship.

Shipbuilding in Sweden contin- ues to make headway, thanks in no small part to the government's apparent willingness to write off large amounts of capital, and to the slimming down operation which has been underway since nation- alization in 1977.

Kockums and Uddevallavarvet, both reduced their workforces by around 30 percent. Shipbuilding capacity in Sweden has been cut more than in any other European nation. The current workforce of 9,450 employed on newbuildings is about only 20 percent of the figure for the early 1970s.

Of these, the two major yards ac- counted for 8 ships and 464,500 dwt, leaving the balance for the smaller operations.

Under the scheme instituted fol- lowing the state take-over, Kock- ums was dedicated to building RO/

ROs and other medium-sized ton- nage, although it is geared up for the construction of large ships.

At the moment, the yard is ap- proaching completion of the last of three RO/RO containerships for the Swedish partners in ACL.

It appeared, temporarily, Kock- ums would experience a gap be- tween delivery of the last ACL vessel and the commencement of work on the two Carnival Cruise

Lighter, lasts longer, more durable, costs less! On top of all that, Clemlite nozzles do more!

They're all part of Clemco's performance System, an inte- gral part of the balanced equipment that has kept

Clemco in the forefront of the industry.

Carbide Alloy liners, a major innovation in blast nozzles, are available in a selection of thirty Clemlite nozzles to allow the precise choice that does the job best. ...and the best is Clemlite with a price that's right!

Because it is the best!