MARCO Seattle recently delivered its second vessel to the Hawaiian Islands, this one a 64-foot steel work boat named Nene (shown above). Built for Uaukewai Diving, Salvage and Fishing Co. of Honolulu, the new vessel is named for the now-rare wild goose that is the state bird of Hawaii.

Uaukewai president Jimmy Smith points out that the Nene is not a tug, but rather a specialized workboat with a specific mission.

She is designed for use in the petroleum industry as a mooring assist, diving, and emergency standby vessel to be stationed at an offshore oil terminal at Barbers Point, five miles off the island of Oahu.

The Nene is 64 feet 3 inches long with a beam of 21 feet and a depth of 8 feet. She is powered by a pair of GM 12V71 diesels with a combined 800 horsepower, driving Coolidge 42-inch four-blade bronze propellers through Twin Disc marine gears. Auxiliary power is provided by two Nissan diesels coupled to 20- kw Lima generators. Hydraulic power comes from a MARCO Hydraulic Pump Drive connected to the starboard main engine. The switchboard and electrical system were provided by Harris Electric, and the engine controls by Mathers.

Deck machinery aboard the Nene consists of a 22-ton hydraulic winch built by Lentec of Canada.

Below her raised pilothouse, the Nene boasts some very comfortable and thoughtfully laid-out accommodations, including a complete galley, dinette area, and berthing for a crew of three. In keeping with her working environment, the new boat's interior is fully air-conditioned.

Electronics and navigational aids aboard include radar and two VHF radios by Raytheon, a Northern SSB radio, a Ross depth sounder, a Furuno satellite navigation system, a Wagner Mk 4 autopilot and compass, and a Raytheon three-station intercom system.

Uaukewai Diving, Salvage and Fishing Co.'s new vessel was delivered in July, after which Mr. Smith and his crew took her to San Francisco before making the eight-day voyage to Honolulu.

For more information on workboat construction at MARCO, Circle 10 on Reader Service Card 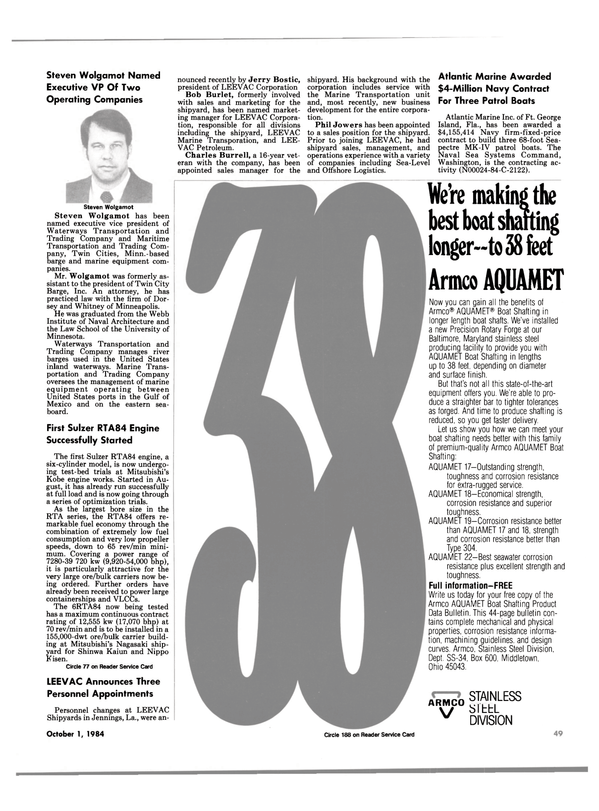