Richard L. Fox, general chairman of the Marine Section of the National Safety Council, recently announced that the annual conference and convention of the maritime industry group—the 67th since it was formed as part of NSC in 1917—will be held at the Palmer House Hotel in Chicago on October 15-17, 1984.

He said that more than 20 specialists in shoreside and vessel safety will address the meeting and include key spokesmen for stevedoring industry management who will deal with the issue of safety in waterfront contract collective bargaining between labor and management.

Details of the program, the speakers and topics are as follows.

Speaking on "Shipboard Drug Abuse—What to Look for!" will be Harold C. Patin, president of Drug Education Associates, Inc. of Metairie, La. The session on the Great Lakes will be headed by Edward Stadnicar, safety supervisor of the Columbia Transportation Division of the Oglebay Norton Company of Cleveland. The speaker, Thomas O. Murphy, a partner in the Cleveland law firm of Thompson, Hine and Flory, will discuss "Casualty Investigation—Coast Guard and Mariner." Monday, October 15 (Dry Cargo and Tank Division—.Joint Session).

Pickup, Chief in the Office of Merchant Marine Safety of the U.S.

Following opening comments by Rear Adm. A.M. Denielson, Commander of the Ninth Coast Guard District in Cleveland, the segment will have four speakers. They are Donald Kerlin of the Marine Technical & Hazardous Materials Division of the Coast Guard, who will speak on the "Intergovernmental Maritime Organization—What it is, How it Works, Latest Developments"; Comdr. James R. Townley of the Planning Staff of the U.S.

McPolin in the office of the Commander of the 11th Coast Guard District in Long Beach, Calif., who will speak on "Marine Firefighting." Tuesday, October 16 (Vidmar Presentation)—The final program session on audiovisual material will be headed by Elizabeth V.

In announcing the Marine Section Program, general chairman Fox noted that the group is holding its convention in conjunction with the NSC's Safety Congress and Exposition, which has taken place in Chicago annually since 1912.

The Marine Section is the largest group in the United States maritime industry devoted to safety. As one of 28 industrial segments of the National Safety Council, it coordinates and helps disseminate information in the marine industry field through meetings, publications, training programs, films and other means. 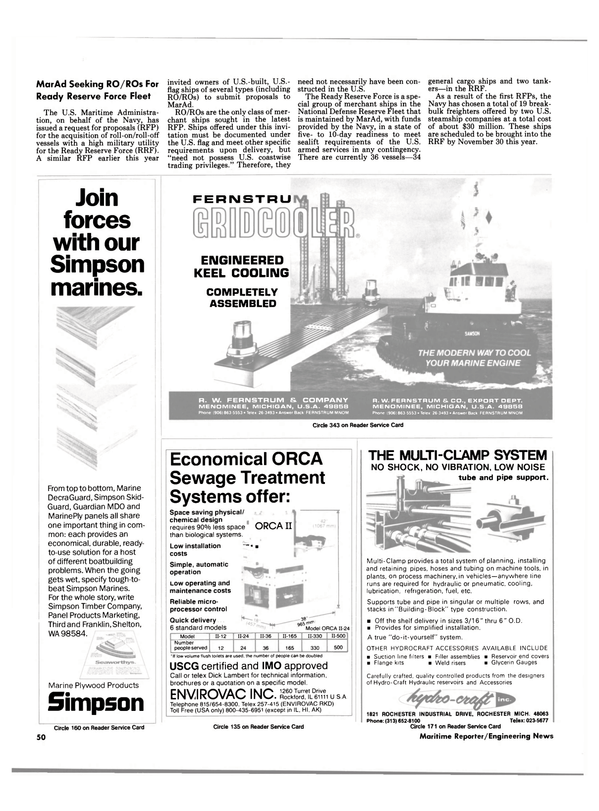