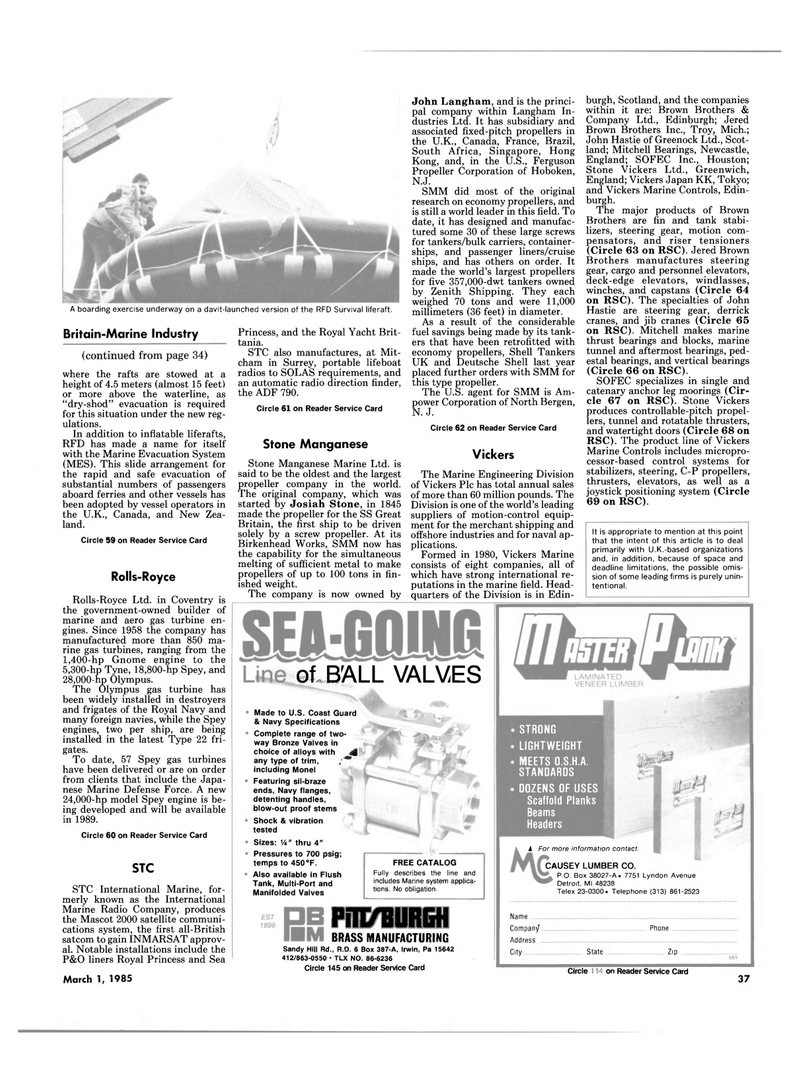 A boarding exercise underway on a davit-launched version of the RFD Survival liferaft.

Britain-Marine Industry (continued from page 34) where the rafts are stowed at a height of 4.5 meters (almost 15 feet) or more above the waterline, as "dry-shod" evacuation is required for this situation under the new reg- ulations.

In addition to inflatable liferafts,

RFD has made a name for itself with the Marine Evacuation System (MES). This slide arrangement for the rapid and safe evacuation of substantial numbers of passengers aboard ferries and other vessels has been adopted by vessel operators in the U.K., Canada, and New Zea- land.

The Olympus gas turbine has been widely installed in destroyers and frigates of the Royal Navy and many foreign navies, while the Spey engines, two per ship, are being installed in the latest Type 22 fri- gates.

To date, 57 Spey gas turbines have been delivered or are on order from clients that include the Japa- nese Marine Defense Force. A new 24,000-hp model Spey engine is be- ing developed and will be available in 1989.

Stone Manganese Marine Ltd. is said to be the oldest and the largest propeller company in the world.

The original company, which was started by Josiah Stone, in 1845 made the propeller for the SS Great

Britain, the first ship to be driven solely by a screw propeller. At its

Birkenhead Works, SMM now has the capability for the simultaneous melting of sufficient metal to make propellers of up to 100 tons in fin- ished weight.

The company is now owned by

John Langham, and is the princi- pal company within Langham In- dustries Ltd. It has subsidiary and associated fixed-pitch propellers in the U.K., Canada, France, Brazil,

SMM did most of the original research on economy propellers, and is still a world leader in this field. To date, it has designed and manufac- tured some 30 of these large screws for tankers/bulk carriers, container- ships, and passenger liners/cruise ships, and has others on order. It made the world's largest propellers for five 357,000-dwt tankers owned by Zenith Shipping. They each weighed 70 tons and were 11,000 millimeters (36 feet) in diameter.

As a result of the considerable fuel savings being made by its tank- ers that have been retrofitted with economy propellers, Shell Tankers

The U.S. agent for SMM is Am- power Corporation of North Bergen,

The Marine Engineering Division of Vickers Pic has total annual sales of more than 60 million pounds. The

Division is one of the world's leading suppliers of motion-control equip- ment for the merchant shipping and offshore industries and for naval ap- plications.

Formed in 1980, Vickers Marine consists of eight companies, all of which have strong international re- putations in the marine field. Head- quarters of the Division is in Edin- burgh, Scotland, and the companies within it are: Brown Brothers &

The major products of Brown

RSC). The product line of Vickers

It is appropriate to mention at this point that the intent of this article is to deal primarily with U.K.-based organizations and, in addition, because of space and deadline limitations, the possible omis- sion of some leading firms is purely unin- tentional. of BALL VALVES