Whether the shipowners' interest is deepsea, coastal, or inland waterways, Europort is both a shop window and meeting place for equipment and people. Many shipping executives have said that a day at Europort is equivalent to many months of visiting manufacturers, shipbuilders, engine builders, and suppliers of the latest items of marine equipment.

Despite the continuing recession in the world shipping industry, business goes on and for many survival is a question of the ability to own and operate efficient tonnage. Older vessels are being replaced by the hybrid ship capable of fulfilling several roles and manned by smaller but better-qualified crews.

These vessels require the latest and best equipment, from satellite navigation and computerized cargo operations to new designs of diesel engines and cargo-handling gear, all of which are to be seen, examined, and discussed at the Europort Exhibition.

The Europort in Amsterdam in November 1983 was the first to be held on a biennial basis and the first since the exhibition and congress was taken over by the RAI Exhibition and Congress Centre management.

That meeting was a great success and this year the demand for exhibition space is again at a high level, the demand coming not only from the many regular exhibitors but from many new exhibitors.

A survey taken at the 1983 exhibition showed that more than 80 percent of the visitors attending were more than satisfied with what they saw and the manner in which it was presented. This year's Europort is bigger than ever and will contain the most comprehensive display of marine equipment ever to be assembled at one time in the same place.

All sectors of the maritime world will be on display, from shipbuilding and ship repair to inland waterways and main and auxiliary machinery.

More than 60,000 visitors are expected from some 75 countries; over 50 percent of the people attending will have the responsibility for decision- making within their own companies.

The importance of the Europort Exhibition within the world maritime industry is recognized by the presence of different national stands, with groups of companies from Western and Eastern Europe as well as the Far East participating in joint ventures. In the case of the United Kingdom, the British Marine Equipment Council has arranged for a joint display by more than 12 leading companies in the marine field.

Now that Europort is a biennial event rather than an annual one, there is a larger concentration of new equipment on display, and there is no overlap with any other major maritime exhibition. New designs and systems are features of the main and auxiliary engine displays, as well as the fuel oil handling and treatment equipment that is the heart of the engine room operations.

Safe and easy access to harbors, jetties, piers, and rivers is of great importance to the ship operator.

The dredging section of the Europort Exhibition is a show on its own, with some of the largest single units of dredging equipment on display.

Maritime Congress What kind of ships will be required to serve the world markets in the 1990s? There can be very few shipowners who have not given considerable thought to the problem of identifying the probable size of ships for a possible future market.

To help in providing a realistic solution to this important problem, the theme chosen for the 1985 Europort International Maritime Congress to be held on November 12 and 13 is "Ships for the 1990s." By dividing this two-day congress into four sections it is hoped that all major aspects of the problem will be covered.

Sir Adrian Swire, chairman of the International Chamber of Shipping, will officially open the congress and will deliver the keynote speech in which he will give an analysis of the shipping market, show the structural changes in patterns of ownership during the past decade, and demonstrate how there has been a transfer of influence to the Far East.

This opening address will set the scene for the entire congress, which starts with a session on trade patterns and shipping economics, followed by the second session dealing with application of new marketing strategies by both shipowners and shipbuilders. Having considered the markets, their size and location, the third session is on the design of ships for the 1990s in terms of main and auxiliary machinery and equipment.

In the final fourth session the congress will look ahead to the fully integrated ship and the use of satellite communications for more efficient and profitable operations.

Members of the Committee of Honour, which is under the patronage of HRH Prince Bernhard of the Netherlands, will take part in the congress as chairmen of the sessions. The first session will be chaired by Brian Griffiths, dean of the City University Business School. In this session J. Jens, immediate past senior deputy director, Maritime Safety Division of IMO, will talk on the application of new safety requirements, and another senior executive will discuss the planning of ports to handle ships for the 1990s.

The second session of the first day, under the chairmanship of Dr.

N. Nordenstrdm, president of the International Association of Classification Societies, will be concerned with markets and money. Marketing strategies and shipping economics is the subject for Prof. Victor Norman of the Norwegian School of Economics and Business. He will be followed by Otto Norland, a familiar figure at international ship finance meetings, who is now with the Deutsche Schiffahrtsbank AG in Bremen. He will speak on the matter of finance for ships.

The first session on the second day, chaired by Mr. Jens, will look at the marketing problems facing both the shipowners and shipbuilders in the next decade. At this important session Dr. John Parker, chairman and chief executive officer of Harland & Wolff Ltd., will speak for the shipbuilder, while W.A. Mulock Houwer, a member of the board of Koninklijke Nedlloyds Groep nv, will present a shipowner's projection of the shipping scene in the 1990s and how the challenge of changing trade patterns may best be met.

The second half of the third session will be of a technical nature, with J. Neumann, managing director of YARD Ltd., and Dr. Bob King, a director of YARD, presenting a paper that considers some of the ship types likely to be required in the 1990s, and which suggests the corresponding machinery installations designed to give the required flexibility and reliability while offering low first cost and low operation costs.

Representatives from Howaldtswerke- Deutsche Werft, the shipyard involved in the study of the "Ship of the Future" for West German shipowners, will present a technical paper entitled "The Equipment Package for the Ships of the Future—A Challenge to a New Equipment Generation." Much of the equipment at present in use aboard ship is outdated and must be completely redesigned.

The congress will take a realistic look ahead as the fourth and final session under the chairmanship of George Thebaud, president of the Association Technique Maritime et Aeronautique, investigates the fully integrated ship and the use of satellite communications for more efficient operations. Three speakers will deal with various aspects of this important subject— R.F. Hansford of Racal Marine Systems; J. Christopher Bell, development officer of INMARSAT; and Thomas A. Stansell Jr., director of Marine and Survey Systems Ltd.

The Europort Congress Coordinating Committee, under the chairmanship of J. Stuart Robinson, director and secretary of the Institute of Marine Engineers, believes that the congress theme, Ships for the 1990s, is of vital interest to the maritime industry, from shipowners and shipbuilders to engine manufacturers and the designers and suppliers of all the auxiliary equipment.

"A Shipowner's View of Shipping Policy and the Effect of Future Legislation in General upon World Trading Patterns," by a speaker to be announced.

"Marketing Strategies and Shipping Economics for the 1990s," by Prof.

"The Bank's Attitude and Philosophy to Finance for the Ships of the 1990s," by Otto R. Norland, Deutsche Schiffahrtsband AG.

Wednesday, November 13 Session 3: The Design of Ships Required in the 1990s.

"A Shipowner's Projection of the Shipping Scene into the 1990s and Ways of Meeting the Challenge of Changing Trade Patterns," by W.A.

Mulock Houwer, member of the board, Koninkijke Nedlloyd Groep nv.

"The Shipbuilder's Philosophy for Marketing His Products and How an Owner's Needs Are Met," by John Parker, chairman and chief executive, Harland & Wolff Ltd.

"Selection of Main and Auxiliary Machinery for the Ships of the 1990s," by J. Neumann, managing director, and Dr. R.H. King, director, YARD Ltd.

Session 4: Fully Integrated Ships and the Use of Satellite Communications for More Efficient Operation. 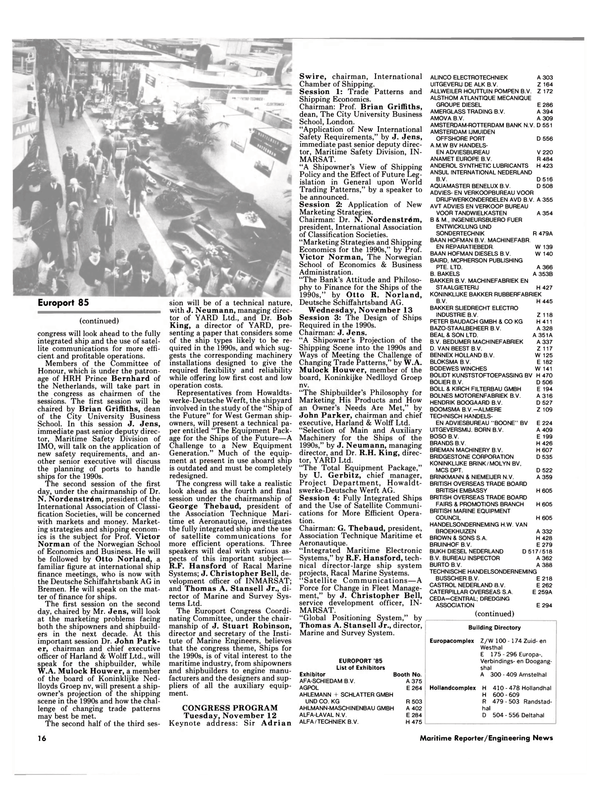