—Free Literature Available The Port of London Authority has awarded a contract to the Norcontrol Division of Kongsberg Ltd., for a new radar display system in the operations room of the Thames Navigation Service at Gravesend.

Included in the contract are facilities for recording information about vessel movements and transferring it to the vessel movement data processor which has been recently installed.

The project, known as POLARIS (Port of London River Information System) is a major step towards improving safety for shipping using the river Thames. In 1984, 24,898 seagoing vessels and 13,500 movements within the port area handled approximately 48 million tons of cargo. This makes the Port of London and the river Thames the busiest waterway in the United Kingdom.

The new radar display system using Norcontrol V0C86 consoles, will cover the port approaches, the oil terminals at Shellhaven and Canvey Island, the Tilbury Dock complex and upriver as far as Erith. The V0C86, based on the VOC8OA, enables unlimited off-centering of the displayed area. Conventional radar displays will continue to be used from Erith to Greenwich in the Thames Barrier Navigation Centre.

At Gravesend, in the Thames Navigation Service building, the top floor is being renovated to provide an operations room which will house the new displays and computer terminals linked to the vessel movement data processor. Five Norcontrol consoles will display radar information from the four remote radars at Crayfordness, Broadness, Cliffe and Warden Point and from the local Gravesend radar. Normally, one console will display combined radar data from both the Crayfordness and Broadness radars.

One console will display information from the local Gravesend radar.

Two consoles will display information from the Cliffe radar showing two different areas. The fifth display will show radar data from the Warden Point radar which covers the main approaches to the port of London.

However, each display console is switchable between the five radar sources and therefore the input from any of the five radars can be displayed on any or all of the V0C86 consoles or in combination with the other radars.

Vessels entering the port approaches will be tracked by the system.

The integrated tracking facility allows for automatic handover from one radar to the next of vessels inbound or outbound. Vessels at anchor or alongside berths are monitored.

Radar information passes through digital scan converters in each console which convert analogue radar signals into digital format for display on high-resolution TV screens together with synthetically produced chart information displayed in color. The TV presentation allows daylight viewing and an instantaneous visual presentation of the traffic situation in the port and its approaches. A standard feature is the ability to zoom in for a close view of any area of special interest.

With London, Norcontrol will have nine VTM systems operating in the UK. Teesport was the first in 1979 and this was followed by an offshore vessel traffic monitoring system for the Magnus platform operated by BP. The Forth Ports Authority, Portsmouth and Plymouth are other ports with Norcontrol vessel traffic management systems already in operation. Two MOD army ranges have Norcontrol radar surveillance systems. In September the Port of Sullom Voe will be fitted with a Norcontrol system.

Norcontrol, headquartered in Horten, Norway, is represented in the U.S. by Nav-Control, Inc. of Halesite, N.Y. 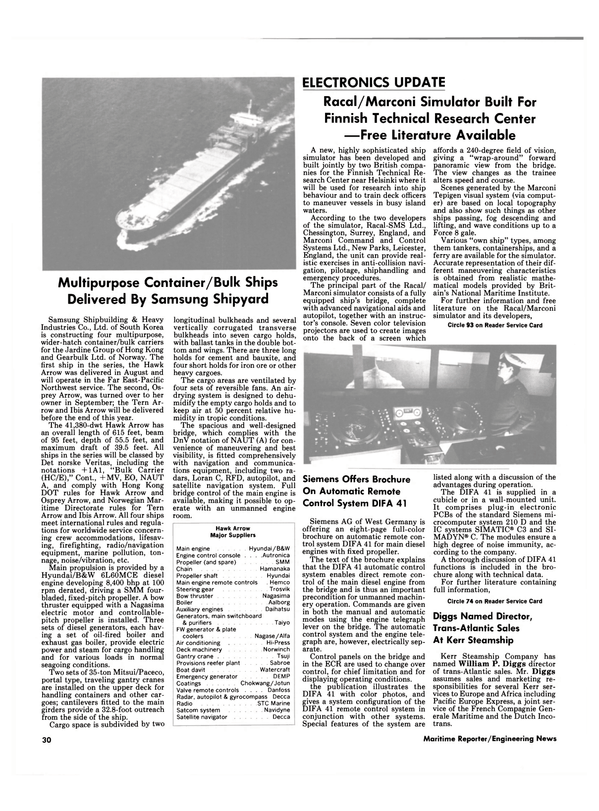