Crowley Maritime's Red & White Fleet recently took delivery of a new 86-foot catamaran intended for passenger service between San Francisco and San Pablo Bay. The 400-passenger commuter vessel Dolphin was christened at the fitting-out yard of Nichols Brothers Boat Builders, Inc. in Langley, Wash. It will provide the first ferry service between San Francisco and Vallejo in 49 years, according to David Pence, general manager of the Red & White Fleet.

The new catamaran is a virtual sister vessel of the Catamarin, which the Red & White Fleet now operates between San Francisco and Marin County.

Monday through Friday the Dolphin will carry commuters on morning and evening runs between the Ferry Building in San Francisco and Vallejo. It takes a commuter some IV2 hours to drive from Vallejo to San Francisco across the Oakland Bay Bridge. The catamaran will make the same trip by water in about 50 minutes. At mid-day and on weekends, the vessel will carry passengers to Marine World/Africa U.S.A., a new theme park being built on San Pablo Bay.

Like other Nichols-built catamarans, the Dolphin was designed by International Catamarans, Pty, Ltd.

Three other International Catamarans- designed vessels are under construction in U.S. yards. Nichols will deliver a 100-foot, MWM-powered cat to Robert and Lori Giersdorf for use by Glacier Bay Yacht Tours this fall. A 78-foot vessel powered by Rolls Royce engines for use as a diving party boat in the Bahamas is nearing completion in Florida, and Gladding-Hearn Shipyard in Somerset, Mass., will build a 79-foot catamaran for an eastern buyer.

Other vessels under contract at the Nichols yard on Whidbey Island in Freland, Wash., include a 150- foot topsail schooner that will be used as a medical ship in Micronesia, and a sternwheel excursion vessel for use in Fairbanks, Alaska.

In another development, the Washington State Department of Transportation has announced it will purchase the 86-foot catamaran Glacier Express from the Giersdorfs and use it to initiate passenger- only ferry service between Seattle and Bremerton, Wash., in October this year. The vessel will be reconditioned and renamed; Nichols delivered the Glacier Express in 1985. 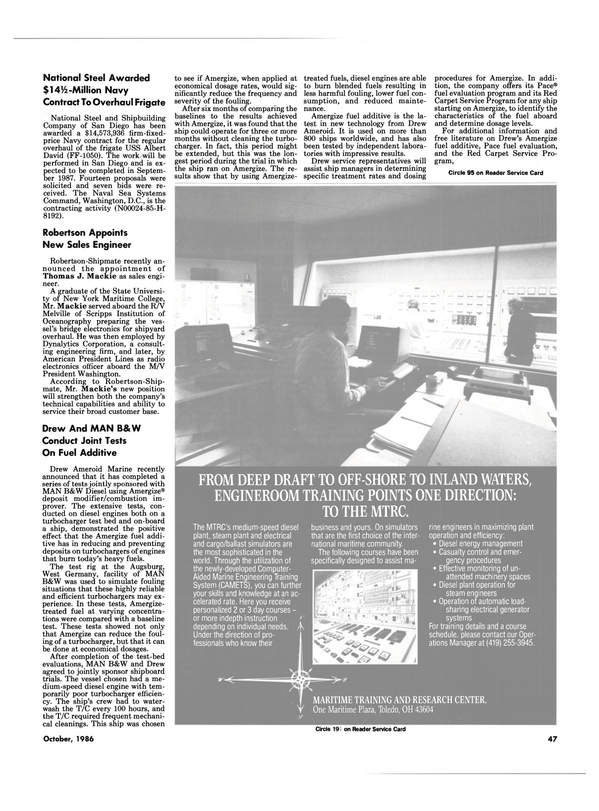