—Literature Available— The latest addition to MAN B&W Diesel's low-speed engine program, the mini-bore S26MC, extends the superior economic and technical merits of the two-stroke crosshead design to a ship's propulsion segment that, traditionally, has not been dominated by the twostroke engines.

During the design stage, special attention was paid to all details, dimensions, and weight. This has resulted in an extremely compact installation offering a highly attractive, easy to maintain alternative to traditional four-stroke engine propulsion plants.

Like other models in the MC pro- gram, the S26MC will be available in power-optimized MC or fueloptimized MCE versions with exactly the same dimensions. The S26MC will deliver an output per cylinder up to 495 bhp at 250 rpm on a mean effective pressure of 16.8 bar. The S26MCE has a rating of up to 395 bhp per cylinder at the same speed, but on a mep of 13.4 bar.

The large layout area offers flexibility with ratings down to 237 bhp per cylinder at 188 rpm. Specific fuel consumption at maximum continuous rating ranges from 124 to 126 grams per bhp hour for the MCE versions and 126 to 130 g/ bhph for the MC version, with minimum part-load returns of 123-125 g/ bhph and 125-129 g/bhph, respectively.

The S26MC is introduced as a logical development of MAN B&W Diesel's successful L35MC Series, until now the smallest-bore model of its kind in the low-speed, uniflowscavenged, two-stroke engine sector.

The 350-mm bore design made a swift and enduring impact from its introduction in 1981, winning numerous references within the propulsion market traditionally confined to geared medium, four-stroke engines and Japanese low-speed, trunk piston machinery.

The S26MC aims to strengthen MAN B&W Diesel's hold on this important sector of the international market and allow operators of medium and small ship types— oceangoing, coastal, and inland—to exploit the commercial and technical benefits of the low-speed crosshead engine.

Full support from design engineers with vast experience in designing engine room layouts and complete propulsion systems is available to operators and shipyards from the MAN B&W Diesel organization, and may assist in layouts, specifying and/or supplying related equipment packages, and smoothing installation procedures. The package can be tailored to the individual project and embrace pumping, cooling, and fuel treatment modules, propellers, shafting stern tubes, alarm systems, and instrumentation.

Electrical power may be supplied via a power takeoff for a standard engine-driven generator.

As an example of compactness, the 4-cylinder model will have an overall length of just over 3 meters, a height from the crankshaft center line of 4 meters, a minimum overhaul height requirement of only 4.4 meters, and a dry weight of 27 tons.

Said to be the smallest two-stroke uniflow diesel engine of its kind, the S26MC is based on more than 50 years of experience in uniflow design, and is backed by a worldwide service organization. 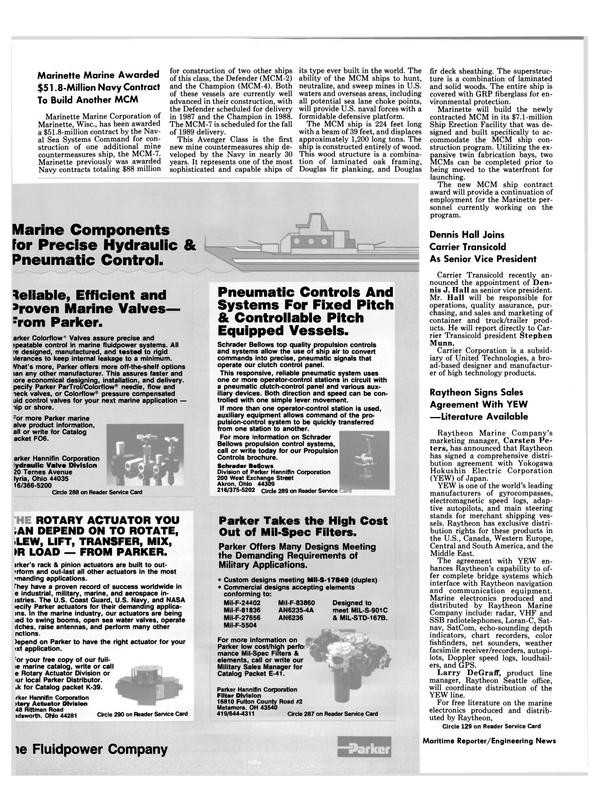