—Literature Available Campbell Shipyard, San Diego, Calif., has been awarded contracts to construct three more 1,500-toncapacity "Super Pacific" Class tuna purse seiners in addition to two already on order. The 257- by 45- by 26-foot vessels have been ordered by a foreign fishing company which operates a large fleet of diversified fishing vessels in the Western Pacific.

The hydrodynamically advanced hull enables the vessel to attain greater speeds purely by virtue of dramatically reduced resistance and substantially improved propulsive efficiently attained by the utilization of new principles of after-body and propeller interaction. When operating at normal speeds, the vessels can save as much as 30 percent in annual fuel costs, according to the company.

The time required to freeze the catch has been reduced to as little as one-third by increased refrigeration and a new circulation system. Seakeeping properties have been enhanced by means of a larger, freesurface- type passive tank anti-roll system. The upper deck area is substantially larger, giving the vessel an increase in both net platform and working deck areas. General crew comfort has been upgraded by locating all personnel in one- and twoman staterooms, all with private or semiprivate heads.

The vessels will be powered by a General Motors EMD 20-cylinder main engine developing 4,000 bhp with a single fixed-blade propeller.

One of the first of the new tuna super seiners, the M/V Sajo Victoria, was recently delivered by Campbell to Sajo Industrial Co., Ltd. of Seoul, Korea.

For additional information on Campbell tuna vessels, and for free literature describing the facilities and capabilities of Campbell Shipyard, Circle 87 on Reader Service Card 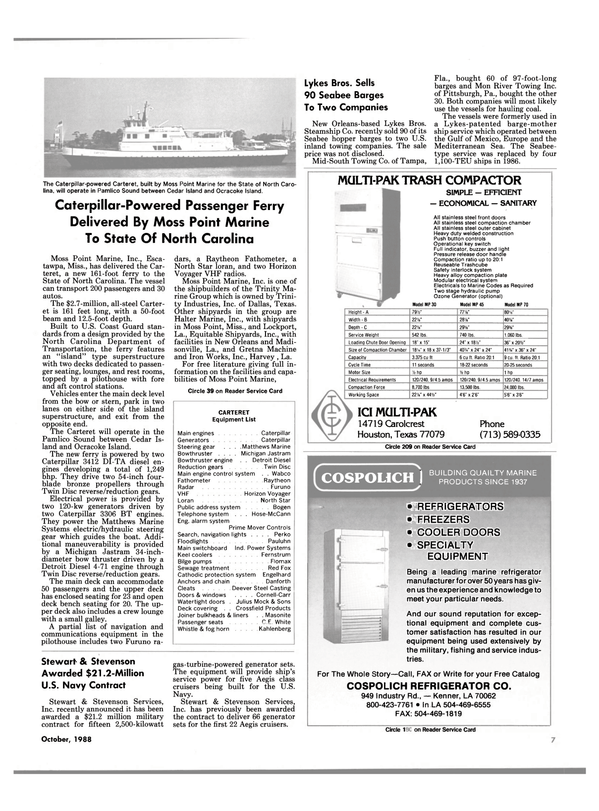