Moss Point Marine, Inc., Escatawpa, Miss., has delivered the Carteret, a new 161-foot ferry to the State of North Carolina. The vessel can transport 200 passengers and 30 autos.

Built to U.S. Coast Guard standards from a design provided by the North Carolina Department of Transportation, the ferry features an "island" type superstructure with two decks dedicated to passenger seating, lounges, and rest rooms, topped by a pilothouse with fore and aft control stations.

Vehicles enter the main deck level from the bow or stern, park in two lanes on either side of the island superstructure, and exit from the opposite end.

The Carteret will operate in the Pamlico Sound between Cedar Island and Ocracoke Island.

Moss Point Marine, Inc. is one of the shipbuilders of the Trinity Marine Group which is owned by Trinity Industries, Inc. of Dallas, Texas.

Other shipyards in the group are Halter Marine, Inc., with shipyards in Moss Point, Miss., and Lockport, La., Equitable Shipyards, Inc., with facilities in New Orleans and Madison ville, La., and Gretna Machine and Iron Works, Inc., Harvey , La.

For free literature giving full information on the facilities and capabilities of Moss Point Marine, Circle 39 on Reader Service Card 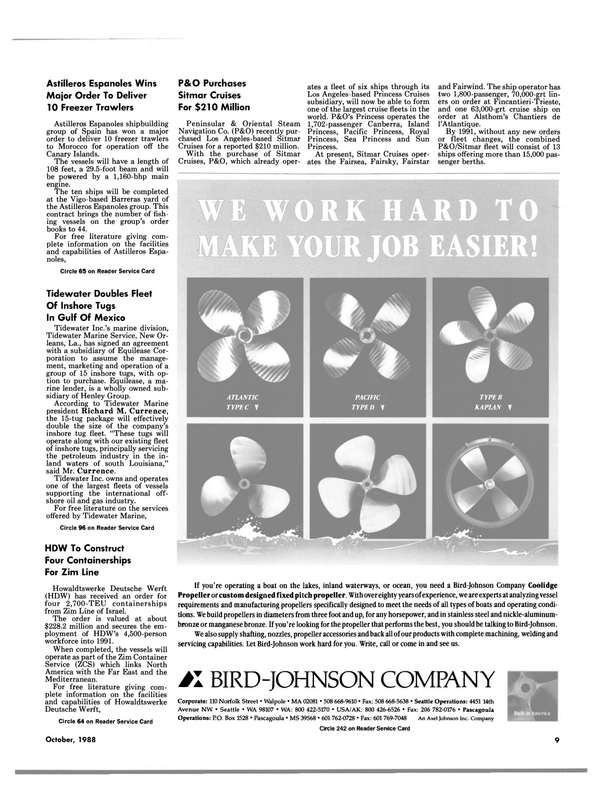