'Consolidation And Expansion' Will Be Theme Of Seatrade's Cruise Shipping '89

*Editor's Note: Mr. Hayman is the publisher of Seatrade Week, which is published weekly by Seatrade North America Inc.

The 500 registered delegates at Seatrade's Cruise Shipping Conference and Exhibition, held in Miami in February of this year, were asked to give their opinions on how they expected the cruise industry to develop over the next 12-month period.

The opinion sample, which was taken by Market Scope, asked a series of questions about passenger volumes and demand, profitability and the prospects for mergers and consolidation in the industry. To the question "Do you expect there to be more mergers between cruise lines?" The survey respondees, more than 30 percent of whom were cruise line executives, gave an overwhelming "yes" answer.

Despite this near unanimity, few observers would have expected this prediction to have been fulfilled as quickly as turned out to be the case.

In the month of August, two major deals were announced which will make a significant realignment of the industry. In a $210-million deal, Princess Cruises, the Los Angelesbased subsidiary of the Los Angeles P & O Group, acquired Sitmar Cruises, its four-ship fleet and three large newbuildings now under construction in France and Italy. Top cruise industry analysts such as Country NatWest's Dan White, who forecasts further consolidation, believes that price makes this a good deal for Princess. The newbuildings, the 1,470-berth Fair Majesty due for delivery next year from Chantiers de l'Atlantique, and two 1,600-berth ships building for delivery in 1990 and 1991 from Fincantiere in Trieste, were contracted at favorable prices and exchange rates.

Princess, which plans to hold on to as many Sitmar employees as possible, says that the Sitmar deal does not affect plans to build a Royal Princess II which is now in discussion with several yards.

The second major consolidation move in August emerged in stages, starting with the news that Gotaas- Larsen had sold its cruise interests, consisting of a 30.72 percent stake in Royal Caribbean Cruise Lines and a 51 percent stake in Admiral Cruises for $260 million to Carnival Cruise Lines. Before the industry had had a chance to digest this information, it became known that Carnival had also mopped up the 30 percent holding of I.M. Skaugen in RCCL and the 7 percent of Admiral owned by Johnson Line and EFFOA. This leaves one of the original partners in RCCL, Norwegian owner Anders Wilhelmsen, out on its own. At press time there was some indication that the company was seeking to form a consortium to buy out the Carnival interest, but it remains to be seen how this situation will ultimately be resolved, Whatever the outcome, there is no doubting the strength of Carnival, or the determination of the company to move beyond the "contemporary" concept. President Mickey Arison has made it clear that the RCCL and Admiral deals do not preempt the company's plans for its "Tiffany" project, which will take it into the luxury end of the market and could involve the construction of three 45,000-grt newbuildings in Sweden.

This move towards further expansion of capacity is not confined to Princess and Carnival by any means. Holland America, which already expanded its fleet once this year through acquisition of existing capacity, is widely expected to confirm orders for newbuildings in the near future. Kloster Cruise takes delivery of two newbuildings this year, the Seaward for NCL and the Royal Viking Sun for RVL in December.

Other notable additions to the fleet this year include the Spirit for Windstar. Royal Cruise Line expanded its fleet earlier in the year with the Crown Odyssey, American Star Lines added the Betsy Ross, and Clipper Cruise took delivery of the Yorktown Clipper. The delivery attracting the most attention this year was the Sovereign of the Seas for RCCL.

With an estimated 11 more ships to come in 1990 and 1991, is this rate of increase in capacity excessive?

Certainly not, if demand keeps increasing at its present rate. Kirk Lanterman, president of Holland America and the current chairman of Cruise Lines International Association, was in no doubt about this when speaking at the Seatrade conference this year. "While capacity will grow by an average of 7.2 percent per year, passenger growth is exceeding 10 percent per year." he said. "If anything, the cruise industry today is scrambling to stay ahead of the game. Our biggest problem in the 1990s may be an UNDERsupply of quality and costefficient capacity," he told delegates.

Along with this expansion of capacity and optimism about demand, there are some entrepreneurs who believe that the time is right for the mega-cruise vessel. For some years, Knut Kloster has been the principal advocate of this type of vessel in his attempt to find finance for the Phoenix project. This year he was joined by the Indian-born tanker magnate Ravi Tikkoo. His concept of the "Ultimate Dream" may not be as big as the Phoenix in terms of capacity but there are some similarities in the concept. It remains to be seen whether the viability of the mega-ship idea will be tested in practice.

The issues of consolidation and the expansion of demand, the role of the mega-vessel, etc., will be on the agenda for the next Seatrade Cruise Shipping Conference and Exhibition, which is scheduled to take place at the Miami Intercontinental from February 28 to March 4, 1989.

A panel of experts, including Pricess president Tim Harris, Holland America's Kirk Lanterman, Carnival's Bob Dickinson and Royal Cruise Line chairman Pericles Panagopoulos for the cruise lines, and major travel agents like Bob Seckman, managing director of travel agency services of the American Automobile Association, will give their views on these issues and the future direction of the cruise industry.

Even though the forecasts suggest an optimistic picture so far as demand is concerned, if the ships are to continue sailing full, then more imagination needs to be put into the range of onboard facilities available for cruise passengers and in the itineraries and destinations on offer.

There is no doubt that lines both big and small are spending much more time on identifying new and attractive ports of call, both in the traditional cruise areas and further afield. Thus, while there is still a great deal of opportunity for the well-established products such as the Caribbean from Miami, Mexico, Alaska and the Mediterranean, new areas such as the Pacific and the Far East are attracting considerable attention.

Regency Cruises chairman William Schanz and Exploration Cruise Lines president Bob Giersdorf are two of the speakers looking at this subject in the conference.

The 1989 Seatrade cruise conference will be expanded by an extra day to include two seminar sessions running in parallel for the benefit of delegates. One of these, comprising cruise line operations executives and technical experts, will look at cruise ship technology and vessel operations. The other, including travel agents, marketing experts and tour operators, will look at the distribution systems for the cruise product. Other new conference topics will include U.S.-flag cruise operations by James Kurtz and John Broughan of Aloa Pacific, the concept of cargo-carrying cruise vessels by James De Chant from Ivaran Lines, the pioneers of this new concept, and the views of a major European ferry operator,Thomas Lepisto, president of Sally Lines, Finland, on what the cruise and ferry operators should be learning from one another. Keynote luncheon speakers will be Miami port director Carmen Lunetta and Adm. Joel Sipes of the U.S. Coast Guard.

Each year, the Seatrade conference is accompanied by an exhibition of products and services, destinations and onboard facilities, available to the cruise industry. Although the space has been doubled for 1989, the show is already 80 percent sold out.

The tremendous growth in the cruise industry over the past five years shows no sign of having been affected by the stock market collapse of last October. Most experts agree that the industry has moved into a maturing phase that will mean more consolidation of lines, more sophistication in marketing and product definition, and, perhaps, an influx of participation from nontraditional areas such as the airlines and the hotel industry. Above all, this increasing sophistication creates a tremendous challenge to the shipbuilders, designers and naval architects, marine engineers and other technical suppliers, to increase comfort and convenience for passengers while maintaining operational efficiency. That challenge is being met. The latest generation of cruise vessels represents one of the most exciting areas of marine technical development today. 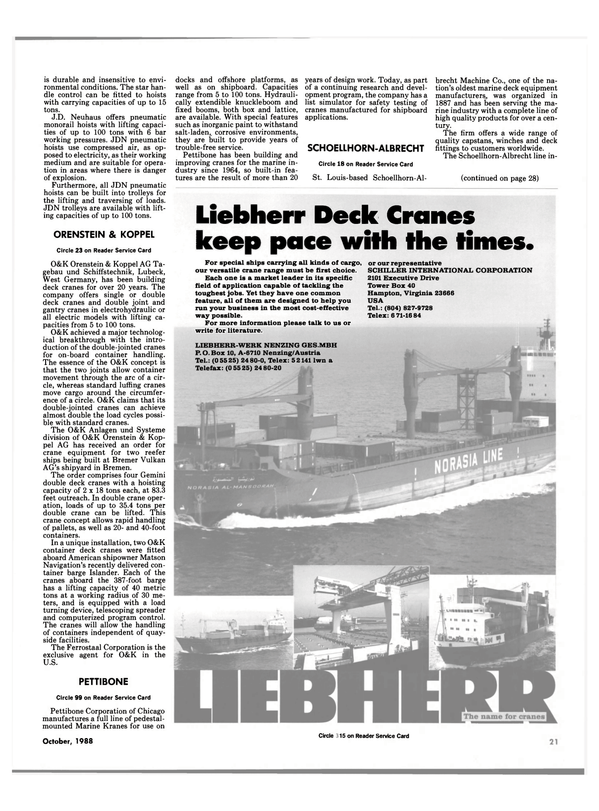 Read 'Consolidation And Expansion' Will Be Theme Of Seatrade's Cruise Shipping '89 in Pdf, Flash or Html5 edition of October 1988 Maritime Reporter