American President Lines, Oakland, Calif., recently took delivery of the second and third of its new C-10 Class containerships from two West German shipyards for use in its Pacific Basin service.

The ships, the President Kennedy and the President Polk, have an overall length of 902 feet, beam of 129 feet, maximum draft of 41 feet, displacement of 75,862 long tonsand a deadweight of 53,648 long tons. The vessels have been classed by the American Bureau of Shipping,' 1 E, Container Carrier'MS + ACCU. The vessels are propelled to speeds of up to 24 knots by some of the most powerful diesel engines ever built. Each C-10 is propelled by a 57,000-hp, 12-cylinder Sulzer diesel engine.

The fuel-efficient C-10 Class ships, which are each capable of carrying 4,300 TEU containers, are the first container-carrying vessels to have a "post-Panamax" beam, meaning their width exceeds the limitations of the Panama Canal. As with the development of the widebodied aircraft, the increased capacity and efficiency requirements for these vessels led to the new design concept.

"These are the first ships to be designed specifically for trans-Pacific service," said Timothy J.

Rhein, APL president. "By removing the limitation on the ships' beam, we were able to significantly increase their capacity, while optimizing their speed, fuel efficiency and stability." "This is traditionally a period of high demand for our eastbound services from Asia to North America," said Mr. Rhein, "and there is continued strong growth in demand for vessel space to carry U.S. exports to Asia. With their fast service speeds and large capacity, these ships will help us meet customer demand for fast, reliable transits," he said.

All five ships are scheduled to be in service by November of this year. 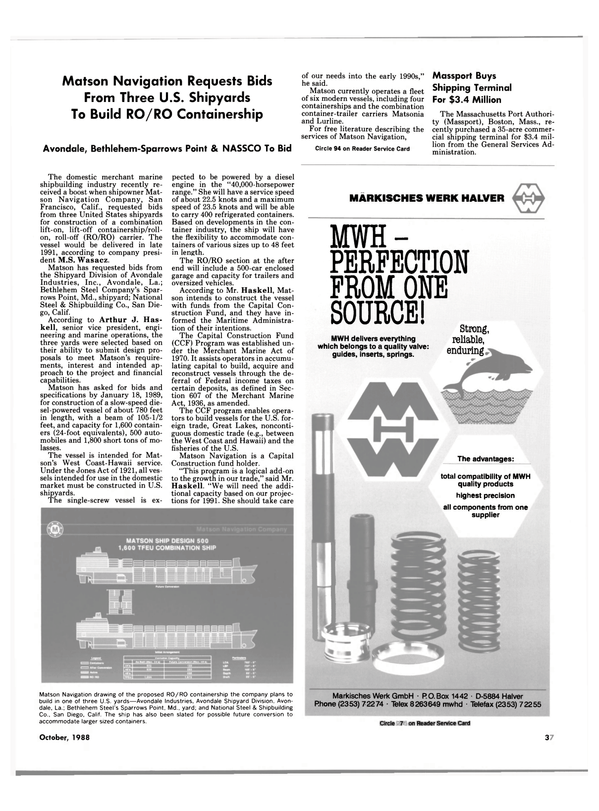