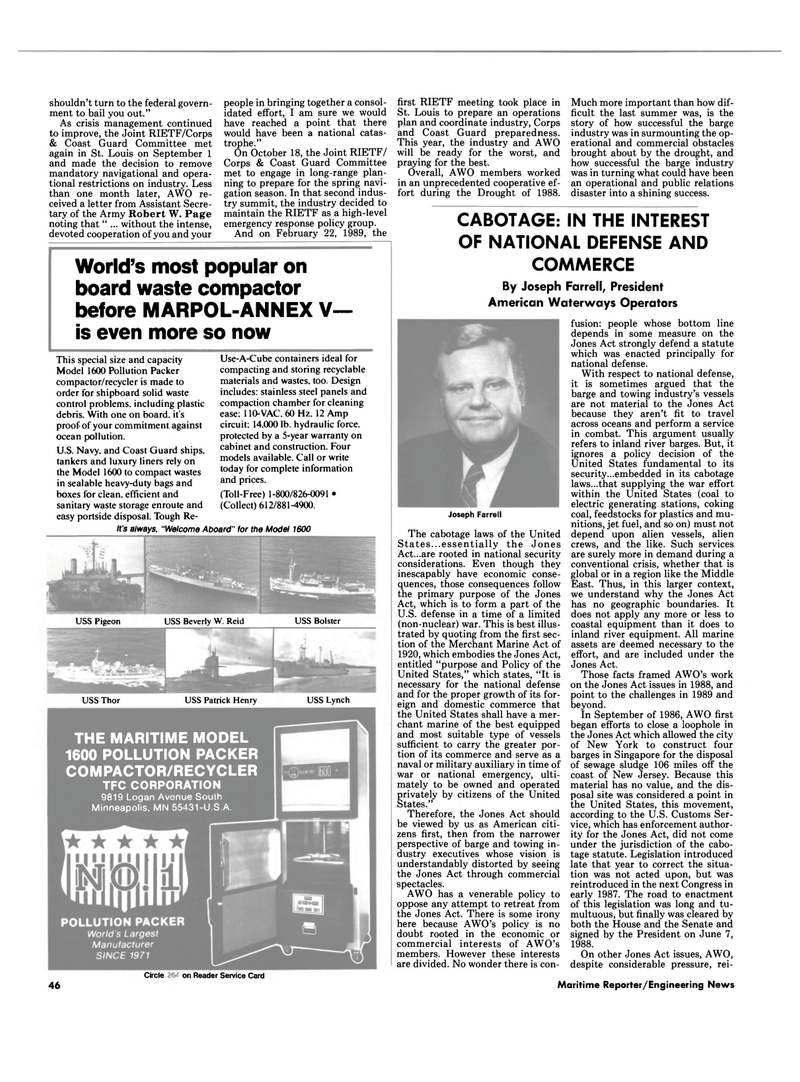 shouldn't turn to the federal govern- ment to bail you out."

As crisis management continued to improve, the Joint RIETF/Corps & Coast Guard Committee met again in St. Louis on September 1 and made the decision to remove mandatory navigational and opera- tional restrictions on industry. Less than one month later, AWO re- ceived a letter from Assistant Secre- tary of the Army Robert W. Page noting that " ... without the intense, devoted cooperation of you and your people in bringing together a consol- idated effort, I am sure we would have reached a point that there would have been a national catas- trophe."

On October 18, the Joint RIETF/

Corps & Coast Guard Committee met to engage in long-range plan- ning to prepare for the spring navi- gation season. In that second indus- try summit, the industry decided to maintain the RIETF as a high-level emergency response policy group.

This special size and capacity

Model 1600 Pollution Packer compactor/recycler is made to order for shipboard solid waste control problems, including plastic debris. With one on board, it's proof of your commitment against ocean pollution.

U.S. Navy, and Coast Guard ships, tankers and luxury liners rely on the Model 1600 to compact wastes in sealable heavy-duty bags and boxes for clean, efficient and sanitary waste storage enroute and

This year, the industry and AWO will be ready for the worst, and praying for the best.

Overall, AWO members worked in an unprecedented cooperative ef- fort during the Drought of 1988.

CABOTAGE: IN THE INTEREST

OF NATIONAL DEFENSE AND

American Waterways Operators fusion: people whose bottom line depends in some measure on the

Jones Act strongly defend a statute which was enacted principally for national defense.

With respect to national defense, it is sometimes argued that the barge and towing industry's vessels are not material to the Jones Act because they aren't fit to travel across oceans and perform a service in combat. This argument usually refers to inland river barges. But, it ignores a policy decision of the

United States fundamental to its security...embedded in its cabotage laws...that supplying the war effort within the United States (coal to electric generating stations, coking coal, feedstocks for plastics and mu- nitions, jet fuel, and so on) must not depend upon alien vessels, alien crews, and the like. Such services are surely more in demand during a conventional crisis, whether that is global or in a region like the Middle

East. Thus, in this larger context, we understand why the Jones Act has no geographic boundaries. It does not apply any more or less to coastal equipment than it does to inland river equipment. All marine assets are deemed necessary to the effort, and are included under the

Those facts framed AWO's work on the Jones Act issues in 1988, and point to the challenges in 1989 and beyond.

In September of 1986, AWO first began efforts to close a loophole in the Jones Act which allowed the city of New York to construct four barges in Singapore for the disposal of sewage sludge 106 miles off the coast of New Jersey. Because this material has no value, and the dis- posal site was considered a point in the United States, this movement, according to the U.S. Customs Ser- vice, which has enforcement author- ity for the Jones Act, did not come under the jurisdiction of the cabo- tage statute. Legislation introduced late that year to correct the situa- tion was not acted upon, but was reintroduced in the next Congress in early 1987. The road to enactment of this legislation was long and tu- multuous, but finally was cleared by both the House and the Senate and signed by the President on June 7, 1988.

On other Jones Act issues, AWO, despite considerable pressure, rei-

The cabotage laws of the United

Act...are rooted in national security considerations. Even though they inescapably have economic conse- quences, those consequences follow the primary purpose of the Jones

Act, which is to form a part of the

U.S. defense in a time of a limited (non-nuclear) war. This is best illus- trated by quoting from the first sec- tion of the Merchant Marine Act of 1920, which embodies the Jones Act, entitled "purpose and Policy of the

United States," which states, "It is necessary for the national defense and for the proper growth of its for- eign and domestic commerce that the United States shall have a mer- chant marine of the best equipped and most suitable type of vessels sufficient to carry the greater por- tion of its commerce and serve as a naval or military auxiliary in time of war or national emergency, ulti- mately to be owned and operated privately by citizens of the United

Therefore, the Jones Act should be viewed by us as American citi- zens first, then from the narrower perspective of barge and towing in- dustry executives whose vision is understandably distorted by seeing the Jones Act through commercial spectacles.

AWO has a venerable policy to oppose any attempt to retreat from the Jones Act. There is some irony here because AWO's policy is no doubt rooted in the economic or commercial interests of AWO's members. However these interests are divided. No wonder there is con-