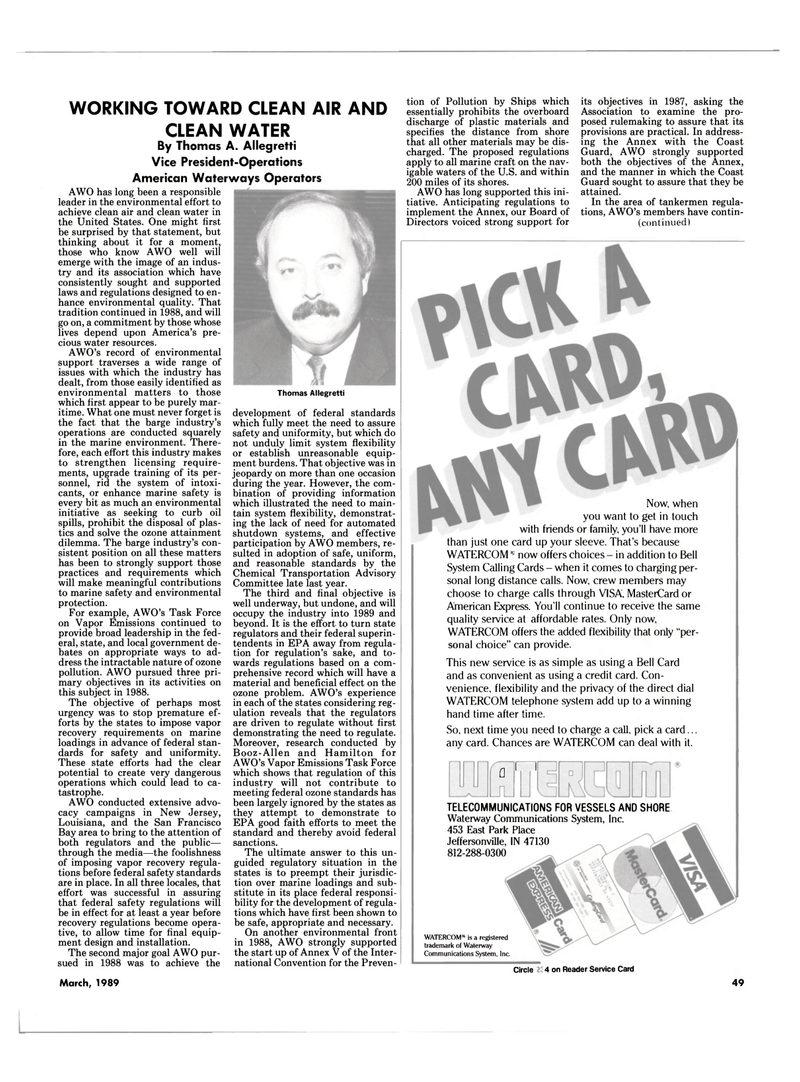 WORKING TOWARD CLEAN AIR AND

By Thomas A. Allegretti

AWO has long been a responsible leader in the environmental effort to achieve clean air and clean water in the United States. One might first be surprised by that statement, but thinking about it for a moment, those who know AWO well will emerge with the image of an indus- try and its association which have consistently sought and supported laws and regulations designed to en- hance environmental quality. That tradition continued in 1988, and will go on, a commitment by those whose lives depend upon America's pre- cious water resources.

AWO's record of environmental support traverses a wide range of issues with which the industry has dealt, from those easily identified as environmental matters to those which first appear to be purely mar- itime. What one must never forget is the fact that the barge industry's operations are conducted squarely in the marine environment. There- fore, each effort this industry makes to strengthen licensing require- ments, upgrade training of its per- sonnel, rid the system of intoxi- cants, or enhance marine safety is every bit as much an environmental initiative as seeking to curb oil spills, prohibit the disposal of plas- tics and solve the ozone attainment dilemma. The barge industry's con- sistent position on all these matters has been to strongly support those practices and requirements which will make meaningful contributions to marine safety and environmental protection.

For example, AWO's Task Force on Vapor Emissions continued to provide broad leadership in the fed- eral, state, and local government de- bates on appropriate ways to ad- dress the intractable nature of ozone pollution. AWO pursued three pri- mary objectives in its activities on this subject in 1988.

The objective of perhaps most urgency was to stop premature ef- forts by the states to impose vapor recovery requirements on marine loadings in advance of federal stan- dards for safety and uniformity.

These state efforts had the clear potential to create very dangerous operations which could lead to ca- tastrophe.

Louisiana, and the San Francisco

Bay area to bring to the attention of both regulators and the public— through the media—the foolishness of imposing vapor recovery regula- tions before federal safety standards are in place. In all three locales, that effort was successful in assuring that federal safety regulations will be in effect for at least a year before recovery regulations become opera- tive, to allow time for final equip- ment design and installation.

Thomas Allegretti development of federal standards which fully meet the need to assure safety and uniformity, but which do not unduly limit system flexibility or establish unreasonable equip- ment burdens. That objective was in jeopardy on more than one occasion during the year. However, the com- bination of providing information which illustrated the need to main- tain system flexibility, demonstrat- ing the lack of need for automated shutdown systems, and effective participation by AWO members, re- sulted in adoption of safe, uniform, and reasonable standards by the

The third and final objective is well underway, but undone, and will occupy the industry into 1989 and beyond. It is the effort to turn state regulators and their federal superin- tendents in EPA away from regula- tion for regulation's sake, and to- wards regulations based on a com- prehensive record which will have a material and beneficial effect on the ozone problem. AWO's experience in each of the states considering reg- ulation reveals that the regulators are driven to regulate without first demonstrating the need to regulate.

Booz-Allen and Hamilton for

The ultimate answer to this un- guided regulatory situation in the states is to preempt their jurisdic- tion over marine loadings and sub- stitute in its place federal responsi- bility for the development of regula- tions which have first been shown to be safe, appropriate and necessary.

On another environmental front in 1988, AWO strongly supported the start up of Annex V of the Inter- national Convention for the Preven- tion of Pollution by Ships which essentially prohibits the overboard discharge of plastic materials and specifies the distance from shore that all other materials may be dis- charged. The proposed regulations apply to all marine craft on the nav- igable waters of the U.S. and within 200 miles of its shores.

AWO has long supported this ini- tiative. Anticipating regulations to implement the Annex, our Board of

Directors voiced strong support for its objectives in 1987, asking the

Association to examine the pro- posed rulemaking to assure that its provisions are practical. In address- ing the Annex with the Coast

Guard, AWO strongly supported both the objectives of the Annex, and the manner in which the Coast

Guard sought to assure that they be attained.

In the area of tankermen regula- tions, AWO's members have contin- (continued)

Now, when you want to get in touch with friends or family, you'll have more than just one card up your sleeve. That's because

System Calling Cards - when it comes to charging per- sonal long distance calls. Now, crew members may choose to charge calls through VISA, MasterCard or

WATERCOM offers the added flexibility that only "per- sonal choice" can provide.

This new service is as simple as using a Bell Card and as convenient as using a credit card. Con- venience, flexibility and the privacy of the direct dial

WATERCOM telephone system add up to a winning hand time after time.

So, next time you need to charge a call, pick a card... any card. Chances are WATERCOM can deal with it. a rn

TELECOMMUNICATIONS FOR VESSELS AND SHORE

WATERCOM* is a registered trademark of Waterway