The Germany Navy has decided in favor of Renk Tacke gear units for the main drive of the new F 123 frigates, following the Navy service boats class 423, the fast mine sweepers class 343, and the mine hunters class 332.

The propulsion plants concerned are each made up of two gear units per frigate of so-called locked-train design. The CODOG gear units (Combined Diesel or Gas Turbine) either transmit the power of 20,000 kw each or the power of the highspeed diesel engines each yielding 3,800 kw to the controllable pitch propellers. Diesel engine and gas turbine operating can alternatively take place as a function of the desired travel profile. During diesel engine operation (cruising travel), a speed of up to 20 knots and at maximum speed travel (gas turbine operation) 30 knots can be reached.

The specific features of these gear units comprise their low-noise operation conditions, the latter being a precondition for successful submarine warfare. Gear units of this design up to full gas turbine and diesel engine power levels have already been subjected to back-to-back tests. During such tests, noise and vibration values were registered which have been even more favorable than the required values. 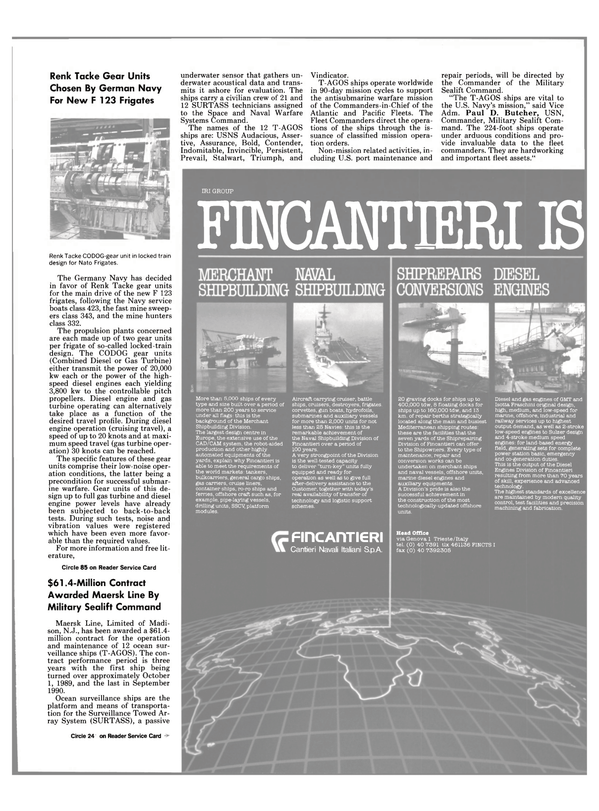