Europe's Leading Builder Receives Steady Influx Of Export Orders World shipbuilding is undergoing a period of positive transition. Prospects in the world shipbuilding market appear to be brightening after several years of downturn.

Throughout all of this period, however, competitive Yugoslav yards have maintained a steady influx of export orders. The Yugoslav shipbuilding industry has maintained its third place position in the world market, behind Japan and South Korea, for three consecutive years.

Although some tendencies were already apparent in 1985, when Yugoslavia ranked third with an order intake of about 0.5 million deadweight tons and eighth on the world total orderbook list with 3 percent of the world total, 1986 proved to be the year that put Yugoslavia "over the top." During that year, Yugoslavia secured its relatively stable position in the top three world shipbuilders by taking orders for about 1.25 million dwt, slightly less than first-place Japan.

In 1988 five major Yugoslav shipyards delivered 22 ships (including one floating dock), totaling 251,043 gt (350,406 dwt) which represented 2.3 percent of total shipbuilding production in the world. More than 90 percent of overall production in the last 30 years has been for export, according to Jadranbrod, Yugoslavia's Association of Shipbuilding.

At the recent Cruise + Ferry 89 Exhibition and Conference in London, Dusko Kosanovic, sales and design director, Brodosplit, gave an insightful look at how his shipyard has achieved success.

"Some years ago," Mr. Kosanovic said, "we decided to approach the market with a high grade of sophistication fully aware that only a few yards are capable of dealing with such sophistication, namely the yards from Finland, France, West Germany, Italy, United Kingdom, and to some extent some other yards." At the end of 1985, Brodosplit received a contract for the construction of two sophisticated cruise car/ passenger ferries from SF Line—an important order for the yard since it represented a breakthrough into the sophisticated passenger vessel construction sector. The contract, however, for the construction of the Amorella and her sister, the Isabella, was a substantial technical challenge for Brodosplit, since the cruise ferry had strict specifications for a high degree of comfort and performance in both powering and maneuvering.

"The results which we obtained from the first ship, especially the market reaction from the area where she sails—Baltic Seas—gave us sufficient confidence that our decision to accept the challenge, testing our abilities in this field, was correct," stated Mr. Kosanovic.

In fact, both the Amorella and the Isabella have proved so successful that Gunnar Eklund, managing director of SF Line, is quoted as saying, "Amorella and Isabella are the calling cards of the Brodosplit shipyard that might bring them further orders for passenger vessels in the future." The present Yugoslav orderbook includes a number of modern and innovative designs, ranging from huge Suezmax tankers of 140,000 dwt to harbor tugs of 2,010 hp. Other notable sophisticated vessels on the Yugoslav books include 110,00- dwt tankers, product carriers of 40,000 and 9,800 dwt, product/ chemical tankers of 16,000 dwt, 2,200-passenger and car ferries, 12,175 m3 reefer ships, 13,590 m3 container carriers, conbulk container feeders, 60,000-dwt OBO carriers, 48,000-dwt bulk carriers, 33,000- dwt container/log bulk carriers, crane ships with 100- and 40-ton cranes, and a large catamaran crane ship with a 1,200-ton, fully revolving crane.

The majority of ships ordered in the Yugoslav shipyards are for export— for owners from Norway, Sweden, Holland, Finland, China, Australia, USSR, Czechoslovakia, Panama and Liberia.

According to Lloyd's Register of Shipping, in the first three months of 1989, Yugoslav yards delivered ships totaling 138,086 gt, good for fourth place worldwide behind Japan, South Korea and the People's Republic of China.

"A wide variety of ships, ranging from crew launches and tugs to Cape-size and Suezmax tankers and bulkers, VLCCs, VLOOs, OBOs, product and chemical tankers, car and passenger ferries for 2,500 passengers have been exported to 70- odd countries all over the globe," stated Ivo Vrandecic, president of Jadranbrod.

"With an orderbook close to 1.5 million gt or about 6 percent of the world total, Jadranbrod yards have established themselves as one of the significant shipbuilders and exporters in the world.

"The dominant role of export orders has forced the yards to constantly realign themselves with the aggressive and competitive market," Mr. Vrandecic said.

Among the latest sophisticated deliveries are the first tanker in a series of three 100,000-110,000 dwt sister ships, the Shoshone Spirit for VSSI Carriers of Liberia (built by 3.

The average annual exports of five major Yugoslav shipyards, which represent most of the industry and are the main source for data referred in international statistics, has shown a rather steep increase since 1960. Exports have grown from $50 million in the early sixties to about $450 million ending in 1990, an average increase of 8 percent per year. This growth has occurred despite the pressure of the downturn in the shipbuilding sector for a portion of the period. It is also interesting to note a rather high ratio, slightly over one, of compensated tons/grt showing relatively high complexity of the vessels built in Yugoslav yards. Another notable observation is the so-called "series factor" obtained by dividing the number of ship types built by the total number of ships on order—22 ship types are represented by the 57 vessels on the orderbook, yielding a ratio of 0.4, meaning in essence that less than three ships are covered by one design.

With prospects brightening in the worldwide shipbuilding and shipping industries, Yugoslav yards appear to be in excellent position to obtain a number of sophisticated and notable building orders—and maintain their position as one of Europe's leading shipbuilders. 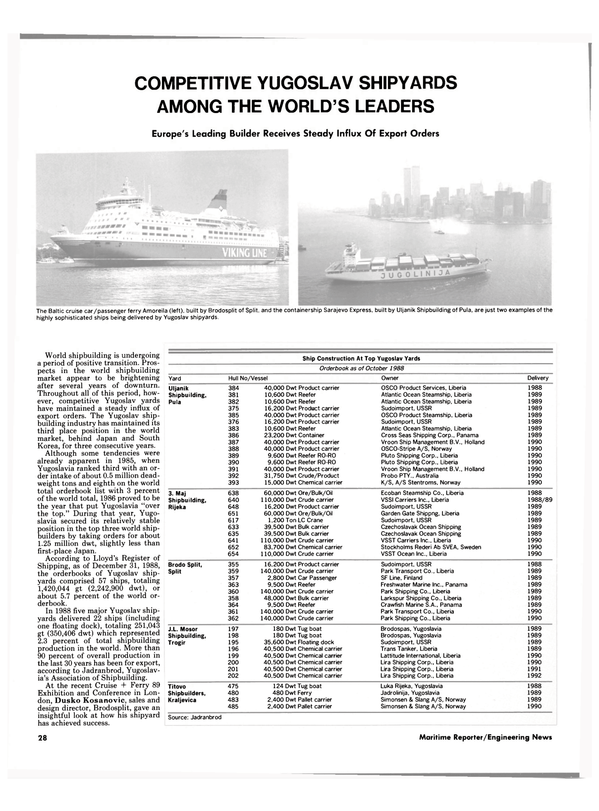